Ashley Olsen is an American businesswoman, author, fashion designer, and former actress and producer. She is best known for playing Michelle Elizabeth Tanner in the popular American TV show Full House; she shared the role with her twin sister Mary-Kate Olsen and they became known as the Olsen Twins. After the twin duo rose to fame, they managed to build their own business empire and went on to become one of the wealthiest self-made millionaires in America. Ranked at number three on VH1’s list of 100 Greatest Kid Stars, Ashley Olsen began appearing in a number of DVD movies along with her twin sister. In no time, the duo became one of the most popular teenage stars in America. However, lack of interest in pursuing an acting career made them opt for fashion designing. They launched their own line of clothing, merchandise, and make-up. Additionally, Ashley Olsen is also the creative director of the company Dualstar which produces a number of movies, DVD films, and other media related material. She is also the co-founder of fashion brands, such as Elizabeth and James, The Row, and StyleMint. Ashley Fuller Olsen was born on June 13, 1986, in Sherman Oaks, California, USA, to David Olsen and Jarnette Fuller Jones. She has a twin sister named Mary-Kate who was born two minutes after her. She also has an elder brother named Trent Olsen and a younger sister named Elizabeth Olsen. Elizabeth went on to become an actress.

In 2004, she graduated from the Campbell Hall School, Studio City, California, United States. She attended the New York University for a brief period, but dropped out later. 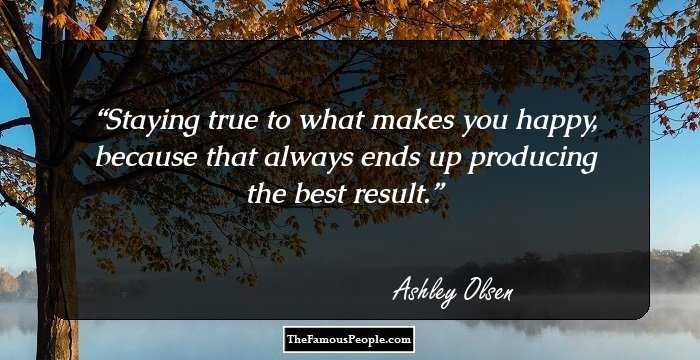 In 1987, a nine-month-old Ashley and her twin sister Mary-Kate made their acting debut in the popular American TV series Full House. She played the role of Michelle Elizabeth Tanner in the series.

In December 1992, she and her twin sister starred in the Christmas TV film To Grandmother's House We Go. The film was very successful and was broadcast on the ABC network.

In 1993, she played the role of Lynn Farmer/Young Aunt Agatha in a children’s TV movie titled Double, Double, Toil and Trouble. The film was directed by Stuart Margolin.

In November 1994, she appeared in the TV movie How the West Was Fun. In the film, she played the role of Jessica Martin.

In 1994, she starred in the video series The Adventures of Mary-Kate & Ashley along with her twin sister. This series had a total of 11 episodes.

In 1995, she was seen as Alyssa Callaway in the film It Takes Two, which was directed by Andy Tennant. The film also starred her twin sister Mary-Kate.

From 1995, she appeared as herself in the DVD series You're Invited to Mary-Kate & Ashley's Party. The series also featured her twin sister and had a total of ten episodes.

In 1997, Ashley and her twin sister starred in the Slime Party episode of the American television sitcom Sister, Sister. It was a teenage family sitcom and was broadcast on the ABC network.

In 1998, she appeared as Emily Tyler in the DVD comedy film Billboard Dad. The film, which was set in Los Angeles, California, was directed by Alan Metter.

Ashley Olsen and her twin sister appeared in 22 episodes of the American sitcom Two of a Kind. The series was broadcast on the ABC network.

In 1999, she starred in the DVD film Passport to Paris which was directed by Alan Metter. That year, she also starred in the TV movie Switching Goals in which she played the role of Emma Stanton.

In 2000, she appeared in the Gossip episode of the American family drama 7th Heaven. The same year, she also appeared in a DVD movie titled Our Lips Are Sealed.

In 2001, she starred in the film Winning London which was directed by Craig Shapiro. The same year, she was also seen in the American movie Holiday in the Sun.

From June 2, 2001 to 4 May 2002, she appeared in the American teen-family sitcom So Little Time. The series was broadcast on the Fox Family network.

In October 2001, she played a voice role in an animated TV series titled Mary-Kate and Ashley in Action! A series of books has also been created based on this series.

In 2002, she portrayed the role of Taylor Hunter in the DVD movie Getting There which was directed by Steve Purcell. That year, she also starred in another Steve Purcell film, When in Rome.

In 2003, she starred in the DVD film The Challenge which was directed by Craig Shapiro. The same year, she portrayed the character of Future Angel in the film Charlie's Angels: Full Throttle.

In 2004, she played a voice role in the Diatribe of a Mad Housewife episode of The Simpsons. She also starred in the American teen comedy film New York Minute.

Later in the year 2004, she became the co-president of the company Dualstar along with Mary-Kate. Dualstar, which has been in operation since 1993, produces movies, TV shows, magazines, and video games.

Along with her twin sister, Ashley Olsen designed a clothing line for girls aged between 4 and 14. They also came up with a beauty line called Mary-Kate and Ashley: Real fashion for real girls.

In 2008, along with Mary-Kate, she co-authored a book titled Influence. The content of the book include interviews of many fashion designers who have inspired them.

Along with her sister, Ashley Olsen owns and manages a series of fashion labels, such as The Row, Elizabeth and James, Olsenboye, and StyleMint. She is the creative director of the Italian shoe brand Superga.

In 2011, the twin duo designed an Olsenboye Change Purse and donated the proceeds. The same year, they collaborated with TOMS Shoes in order to design shoes for underprivileged children across 20 countries.

She was a child actress in the TV series Full House which was one of the most popular American TV shows. The show syndicated in over 25 countries across the world. The TV series also inspired a series of books.

In 1989, Ashley Olsen was the recipient of the Young Artist Award under the Best Young Actor/Actress - Under Five Years of Age category.

In 1996, she was the recipient of the Kids' Choice Award under the Favorite Movie Actress category. She received the award for her performance in It Takes Two.

In 2012, she won a prize along with her twin sister Mary-Kate at the CFDA Fashion Awards.

In 2012, Ashley Olsen and Mary-Kate were the recipients of the WSJ Magazine Innovator of The Year Award.

She was romantically linked with Matt Kaplan, Scott Sartiano, and Greg Chait.

This former actress had to sport fake teeth while filming the TV series Full House as she had lost some of her baby teeth.

See the events in life of Ashley Olsen in Chronological Order