Advanced Search
Ludwig Eduard Boltzmann was an Austrian physicist, who was known for his work in statistical mechanics. Coming from a middle-class family, Ludwig was helped by his mother in his scientific endeavours, as he lost his father at a tender age. Initially he was given private tuitions at home and later he attended high school in Linz. Ludwig studied Physics in the University of Vienna and was mentored by the great minds of the time like Josef Stefan and Andreas von Ettingshausen. Under the guidance of Stefan, he received his PhD and became a lecturer. Ludwig taught at Graz, Heidelberg and Berlin and studied under Bunsen and Helmholtz. During his time in Graz, he met his wife Henriette. Boltzmann was known for his extreme mood swings, which also significantly influenced the direction of his career. His work on statistical mechanics was mainly based on the theory of probability, and was closely associated with the Second Law of Thermodynamics. Some of his theories were far ahead of his time, which often led to extreme opposition by his contemporaries. During his visits to USA, he lectured on applied mathematics, but he did not realize that new discoveries related to radiation would help him to substantiate his theories. Eventually, his desperation and declining mental condition drove him to suicide when he was holidaying with his family. Ernst Mach
DID WE MISS SOMEONE?
CLICK HERE AND TELL US
WE'LL MAKE SURE
THEY'RE HERE A.S.A.P
Quick Facts

Austrian Celebrities
Male Scientists
Male Physicists
Pisces Scientists
Austrian Physicists
Childhood & Early Life
On February 20th, 1844, Ludwig Boltzmann was born to a father who was a tax official, and mother Katharina Pauernfeind, who hailed from Salzburg. His grandfather was a clock manufacturer and had moved from Berlin to Vienna.
After Boltzmann was born, the family moved to Upper Austria to Wels and then to Linz where Ludwig attended high school. In the initial days, he was home-tutored and from a young age, the lad was interested in plants and collected butterflies.
Ludwig studied at the ‘University of Vienna’, where he received his PhD degree in 1866. His thesis was on kinetic theory of gases and his supervisor was Josef Stefan. 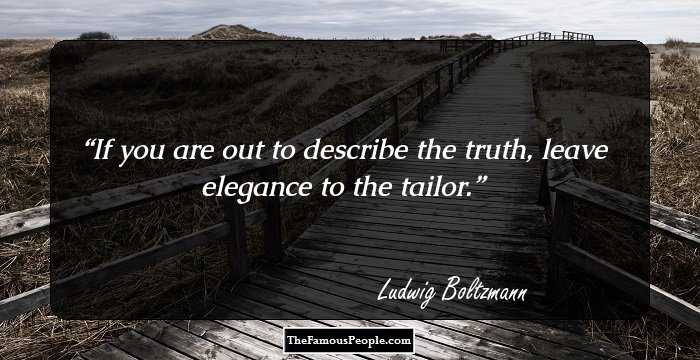 Quotes: You
Continue Reading Below
Career
Ludwig became an assistant of Stefan and in the year 1866, he took several jobs as professors in physics and mathematics at Graz, Munich and Leipzig. The following year, he gave his inaugural speech as a lecturer.
In 1869, Boltzmann was appointed as a professor in theoretical physics in Graz, a post which he held for the next four years.
The same year he also spent a considerable amount of time in Heidelberg with Robert Bunsen and Königsberger.
In 1871, he worked closely with Gustav Kirchhoff and Helmholtz in Berlin. Two years later, he accepted a position for Mathematics in Vienna. However his stay was cut short, as he frequently moved places and came back to Graz again, this time in the department of experimental physics.
During the 1870s, Boltzmann published several papers, in which he explained that by applying law of mechanics, one can better explain the second law of thermodynamics. He also added that the theory of probability can be applied to the movement of atoms.
In 1881, he collaborated with Maxwell and formulated the theory of Maxwell-Boltzmann law. The following year this erudite physicist was appointed as the head of Theoretical Physics in the University of Munich in Bavaria.
After the death of his mentor Stefan, in 1894, Ludwig moved to occupy the former’s position in the department of theoretical physics.
This position, although coveted to Ludwig could not be retained as Ernst Mach, his scientific opponent was appointed as the head of history and philosophy and sciences in Vienna.
In 1900, due to his fallout with Mach, Ludwig moved to Leipzig, where his colleague was another of his strongest opponents Wilhelm Ostwald. Although they were in good personal terms, their scientific differences led a depressed Ludwig to almost take an attempt on his life.
Continue Reading Below
In 1901, after Mach retired, Ludwig came back to Vienna the following year and resumed his chair of theoretical physics, which has not been occupied since he left Vienna. The Emperor Francis Joseph appointed him on the condition that he would never accept a position outside the Empire.
During his second stint in Vienna, Ludwig was offered the philosophy course taught by Mach, which he happily took up. His lectures were so popular that even the largest of the hall could not accommodate all his students. 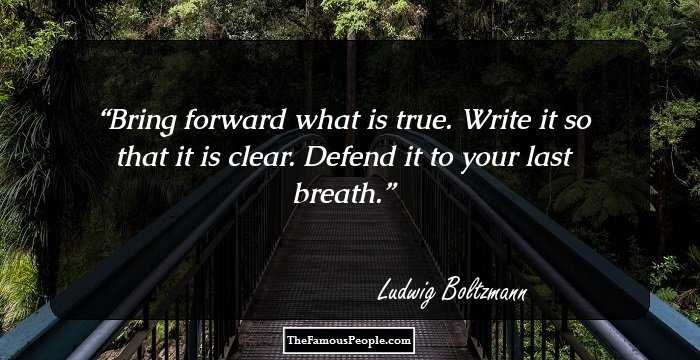 Major Work
Boltzmann explained the second law of thermodynamics with statistical mechanics. He took his investigations further, and tried to work on the general law for energy distribution in various parts of the system. The study was conducted at specific temperature which ultimately led to Maxwell-Boltzmann law.
This eminent scientist was one of the few people of his time who have identified the potential of electromagnetic theory proposed by James Clerk Maxwell.
Awards & Achievements
In 1885, Boltzmann was elected as the member of Imperial Austrian Academy of Sciences.
In 1887, he became the President in University of Graz.
In 1888, Ludwig was elected as the member of the Royal Swedish Academy of Sciences.
In 1889, Ludwig became a Foreign Member of the Royal Society.
He received the honorary doctorate from Oxford.
Personal Life & Legacy
In the year 1872, when women were not allowed in Austrian universities, a young vibrant teacher of mathematics and physics Henriette von Aigentler was refused to audit lectures unofficially. Boltzmann asked her to appeal against the dictate, and it was successful.
In 1876, Ludwig married Henriette and they had three daughters and two sons.
In 1906, while Boltzmann was on a vacation with his family, he hung himself after an attack of depression.
The Boltzmann constant was named after him, as he contributed immensely to the development of statistical mechanics, an important branch of theoretical physics.
Trivia
Boltzmann suffered from extreme mood swings and bouts of depression; at times he was diagnosed with bipolar disorder.

See the events in life of Ludwig Boltzmann in Chronological Order