(Actress and Comedienne Best Known for Her Shows: 'I Love Lucy', 'The Lucy Show' and 'Here's Lucy')

Lucille Ball was an American model and actress, particularly known for her iconic role in the television sitcom ‘I Love Lucy’. She was a singer, model, actress, businesswoman but most of all a perfectionist. In her early years, she faced a lot of challenges as she moved from one place to other because of some unfortunate events. She was a confident and ambitious girl who never kneeled down in front of adverse circumstances, but always returned to achieve her dreams with greater strength and stronger determination than before. She worked as a model for various firms and as an actress in many movies, Broadway musicals and sitcoms in her lifetime. Her most prominent work was the famous 1950s sitcom ‘I Love Lucy’ in which she portrayed the role of a housewife “Lucy”. The show was highly acclaimed by everyone and became a huge success and created new paths and ideas for next generation of sitcoms. She was the first woman to become the head of a film production company, Desilu, which she started with her husband. She was a free spirit, constantly striving towards her dreams with high hopes and committed efforts. She was always loyal to her work and is remembered for her sincere and extraordinary roles in movies and sitcoms. American Celebrities
Comedians
American Women
New Yorkers Actresses
Leo Actresses
Childhood & Early Life
She was born on 6 August, 1911 to Henry Ball, a telephone lineman for Bell Telephone Company and Desiree Hunt in Jamestown, New York. She had a brother, Fred.
In 1915, when she was three years old, her father died of typhoid leaving the family in a vulnerable state. She distinctly remembered the day her father died, as it was the day she became orthophobic, when she witnessed a bird getting trapped in her house.
After her father’s demise, they went to her maternal grandparents in New York and her mother found a job at a local factory. In 1919, her mother married Edward Peterson and they moved to another city in search of work without the children.
Both the children were looked after by Edward’s Swedish parents and it was a hard time for the both the children and grandparents. The grandparents imposed restrictions on her causing her to rebel.
In 1927, another unfortunate incident took place, a neighbor boy was accidentally shot and paralyzed by her brother, due to which her grandfather was sued and forced to sell his house for financial settlement.
Same year, she was enrolled in John Murray Anderson School for the Dramatic Arts but was overshadowed by Betty Davis, a star student. The school even sent a letter to Ball’s mother suggesting not to waste money as her daughter has no future in this field at all. 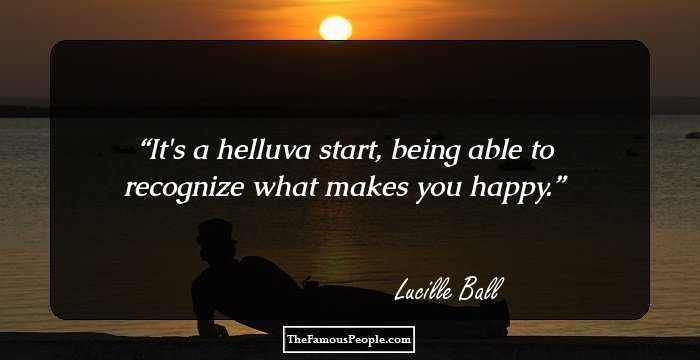 Quotes: You
Continue Reading Below
Career
In 1928, she changed her stage name to Diane Belmont and worked as a fashion model for Hattie Carnegie. She had a blooming career ahead of her, when she got ill with rheumatic fever and was unable to work for next two years.
In 1932, after recovering from the disease, she resumed her career as a model again for Carnegie and also became the Chesterfield cigarette girl.
She went to Hollywood to pursue her career as an actress in 1933, and appeared in several B-grade movies, earning the title “Queen of the B’s”.
Some of her more popular movies include ‘The Three Musketeers’ (1935), ‘Stage Door’ (1937), ‘Room Service’ (1938), ‘Too Many Girls’ (1940) and ‘The Big Street’ (1942).
Her husband persuaded her to work in broadcasting, and she got the lead part in CBS radio program ‘My Favorite Husband’ which ran from 1948 to 1951. Later, CBS asked her to adapt it for television; she seized the opportunity and responded with a demand of working in it with her real life husband, Desi Arnaz.
She formed Desilu Productions with her husband and the show was adapted as ‘I Love Lucy’ in collaboration with CBS. The show premiered in 1951 and was a phenomenal success and she set the stage for sitcoms which later influenced the generations to come.
After the show ended in 1957, she worked in Broadway musicals, some sitcoms and several movies. Her last appearance was in the sitcom “Life With Lucy” in 1986 which was cancelled after a few episodes. 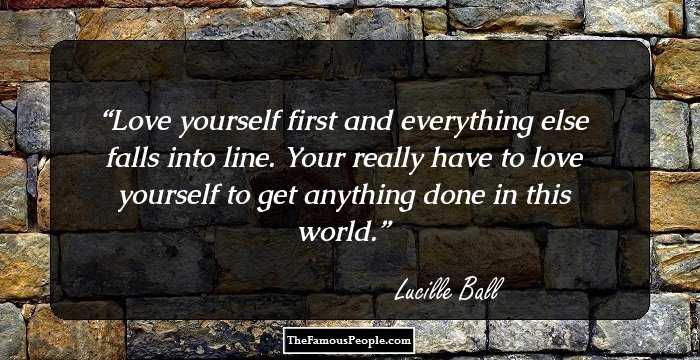 Quotes: Love, Yourself
Major Works
In 1942, she was critically praised for her role in “The Big Street” as a handicapped nightclub singer.
Continue Reading Below
Her first production ‘I Love Lucy’ with her real life husband was an instant hit and she became a household name. It was rated No. 1 within six months of its start with a groundbreaking success in the history of sitcoms.
Her show also influenced the future sitcoms in terms of filming with a live audience and set-ups that were created on distinct sets adjacent to one another. ‘I Love Lucy’ was the most prominent and unmatched achievement of her career.
Awards & Achievements
In 1960, she was awarded two stars on the Hollywood Walk of Fame.
In 1971, she became the first woman to receive the International Radio and Television Society's Gold Medal.
In 1989, she posthumously received the Presidential Medal for Freedom and Women's International Center's 'Living Legacy Award’. 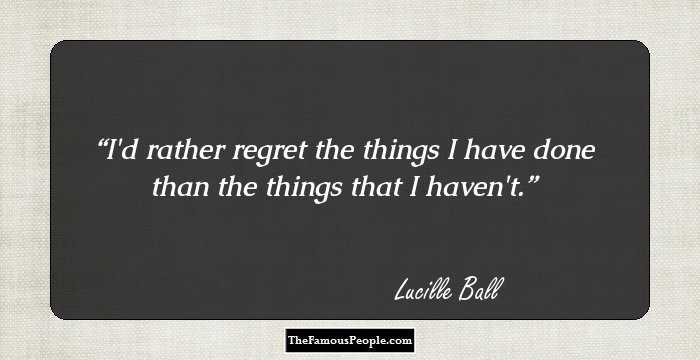 Quotes: I
Personal Life & Legacy
In 1940, she met a Cuban bandleader Desi Arnaz, and starred with him in the B-grade movie, ‘Dance, Girl, Dance’. Both of them fell in love with him each other and got married.
During the initial years of their marriage, they were unable to stay together due to her career which forced her to travel continuously. In 1944, she filed for a divorce but later reconciled with her husband.
She had miscarriages in 1942, 1949 and 1950 and finally gave birth to her first child, Lucie Arnaz in 1951. On 19 January 1953, she gave birth to their second child, Desi Arnaz Jr.
In 1960, she got divorced from Desi Arnaz, claiming the marriage to be ‘a nightmare’ for her all these years, while also stating that ‘Desi was a great love of her life’.
In 1961, she married Gary Morton, a standup comedian and remained with him until her death.
On April 26, 1989 she complained of severe back pains and lost consciousness, shortly after her heart surgery for aortic rupture. She died soon after; later it was confirmed that it happened due to another aortic rupture in abdominal area, unrelated to previous surgery.

Quotes By Lucille Ball | Quote Of The Day | Top 100 Quotes

See the events in life of Lucille Ball in Chronological Order