(Actor, Producer and Bandleader Best Known for His TV Sitcom ‘I Love Lucy’)

Advanced Search
Desi Arnaz was a famous American musician, actor, and television producer. He was the founder of the successful Latin music band, ‘Desi Arnaz Orchestra.’ This orchestra introduced America to conga, a Latin-American dance that received huge popularity. It was Xavier Cugat, a popular figure in Latin music, who noticed Arnaz for his potentiality as a musician. His single ‘Babalu’ is regarded as his signature song. Along with his wife Lucille Ball, he formed ‘Desilu Productions’ which organized Arnaz and Lucille Ball’s programs on stage, screens, and radio. Under this production house, he produced several television series like ‘The Ann Sothern Show’ and ‘The Untouchables.’ This production house also produced feature films like ‘Forever, Darling.’ As an influential producer, he is credited for his innovative ideas like multi-camera sitcom and organizing live shows at the studio. As an actor, he is remembered for his outstanding performance as Ricky Ricardo in American television series ‘I Love Lucy.’ He also acted in several other films, such as ‘Father Takes a Wife’ and ‘The Navy Comes Through.’ His role of a dying soldier in ‘Bataan’ brought him wide recognition. American Celebrities
American Men
Pisces Actors
American Actors
American TV & Movie Producers
Childhood & Early Life
Desi Arnaz was born Desiderio Alberto Arnaz y de Acha III on March 2, 1917, in Santiago de Cuba, Republic of Cuba, to Desiderio Alberto Arnaz II, a Cuban politician, and Dolores de Acha.
He belonged to an affluent family that owned three ranches, a palatial home, and a vacation mansion situated on a private island in Santiago Bay, Cuba.
After the ‘Cuban Revolution’ in 1933, Alberto, his father, was imprisoned and his entire property was confiscated. When his father was released, the family escaped to Miami, Florida.
After reaching Florida, Desi took admission at ‘St. Patrick Catholic High School.’ In an attempt to improve his English, he attended ‘Saint Leo Prep,’ which is situated near Tampa, in 1934. At the same time, he also played guitar at the ‘Roney Plaza Hotel.’ 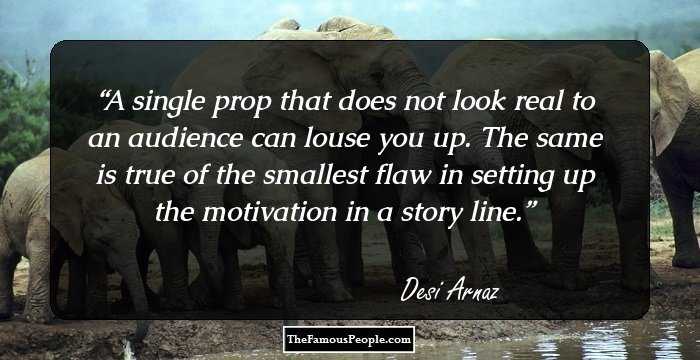 Quotes: You
Continue Reading Below
Career
When Xavier Cugat, a Spanish-American bandleader, discovered his musical potential, Desi received an offer to perform in Cugat’s orchestra. In December 1937, he formed his own band, the ‘Desi Arnaz Orchestra,’ in Miami Beach.
The band helped him gain popularity in the American music industry. Subsequently, he got an opportunity to audition for a Broadway musical titled ‘Too Many Girls’ in 1939. The following year, he went to Hollywood to act in the film adaptation of the musical.
Arnaz appeared in several movies, such as ‘Bataan’ in the 1940s.
In May 1943, he received his draft notice to serve in ‘World War II.’ As part of the army, he took the responsibility to direct ‘United Service Organization’ programs at a military hospital in San Fernando Valley.
After his discharge from the army, he organized a new orchestra that achieved immense success with live appearances and recordings. In 1946, he performed his single ‘Babalu’ which received critical acclaim.
In 1948, along with Lucille Ball, he started ‘Desilu Productions’ which organized their programs on stage, screen, and radio. In the next year, he played a crucial role in developing ‘I Love Lucy,’ a successful television series which the ‘CBS’ broadcast for six years.
In addition to ‘I Love Lucy,’ he executive produced ‘The Ann Sothern Show’ and ‘Those Whiting Girls.’ He also starred in other series like ‘The Untouchables,’ ‘Whirlybirds,’ and ‘Sheriff of Cochise / United States Marshal.’
He appeared as the bandleader in Bob Hope’s radio show. Later, he hosted a musical quiz show titled ‘Your Tropical Trip.’ His ‘Desilu Productions’ produced several shows like ‘The Andy Griffith Show,’ ‘The Dick Van Dyke Show,’ and ‘Star Trek.’
When Ball sold her share of the production house, Desi formed his own production company ‘Desi Arnaz Productions’ that produced the television sitcom ‘The Mothers-In-Law.’
Continue Reading Below
In the later part of 1970, he co-hosted shows alongside daytime host and producer Mike Douglas. He also made a guest appearance with his son Desi Jr. on ‘Saturday Night Live’ to promote his autobiography ‘A Book.’ 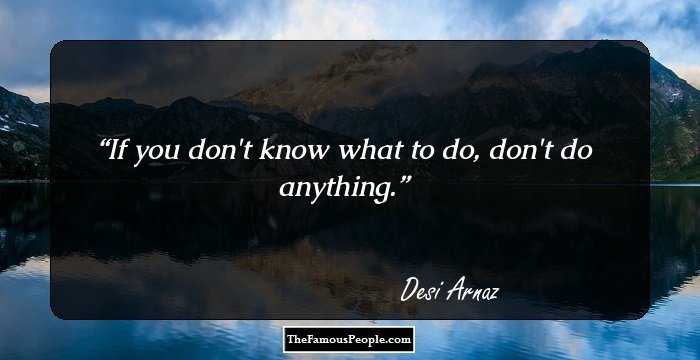 Quotes: You
Major Works
He acted in ‘I Love Lucy,’ an American television situation comedy that was broadcast from October 15, 1951 to May 6, 1957 on ‘CBS.’ Its story depicts the life of Lucy Ricardo and her bandleader husband Ricky Ricardo. The show won five ‘Emmy Awards.’
Personal Life & Legacy
On November 30, 1940, he married actress Lucille Ball. Though they largely led an unhappy married life, they had two children, Lucie Arnaz and Desi Arnaz Jr. Their children went on to become actors.
Ball divorced him in 1960, owing to his problems with alcohol and extra marital affairs. At that time, he was suffering from diverticulitis. On March 2, 1963, he married Edith Mack Hirsch.
Arnaz and his wife moved to Del Mar, California, where he spent the rest of his life in semi-retirement. He owned a horse-breeding farm in Corona, California, and raced thoroughbreds.
He also contributed to charitable and nonprofit organizations, including ‘San Diego State University.’
Desi Arnaz has two stars on ‘Hollywood Walk of Fame’ for his contribution towards motion pictures and television works.
He used to smoke four to five Cuban cigars a day. This habit of his made him suffer from lung cancer. His first wife Ball spent several hours with him before he went into a coma. He died on December 2, 1986, at the age of 69.
Trivia
While living in Cuba with his parents, this multi-talented personality ate cans of pork-and-beans to save money. At that time, he also used to clean bird cages to earn money.
In the film ‘The Mambo Kings’ (1992), he was portrayed by his real-life son, Desi Arnaz Jr.
In 1957, he opened the ‘Desi Arnaz West Hills Hotel,’ with 42 rooms and a restaurant featuring his own personal recipes.
He was an avid golfer, fisherman, and poker player. Interestingly, he was seen fishing, golfing, and playing poker in ‘I Love Lucy’ (1951).

See the events in life of Desi Arnaz in Chronological Order