A girl of many talents, Laura Marano is an American actress, singer, songwriter, and model. The renowned girl strated her career with Stage Door Theater at the age of 5. Ever since, her career has grown by leaps and bounds, with several roles across television series, movies, and sitcoms. As a teen star, she shot to fame with the Disney Channel Original Series, ‘Austin and Ally’, in which she played the role of Ally Dawson. However, despite her busy shooting schedules, she did not attend a school on set but instead attended a regular high school. Laura has an elder sister Vanessa Marano, who starred as April in ‘Gilmore Girls’, and currently stars as Bay in ABC’s ‘Switched at Birth.’ Laura Marano is currently a recording artist for the label Big Machine Records and also has her own fragrance line. In 2022, she appeared in 'The Royal Treatment.' 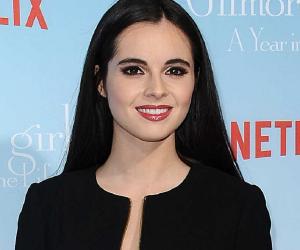 Laura began her career at the age of 5, working with the Stage Door Theatre in multiple productions. She has a host of commercials and television roles to her credit, including appearances in ‘Without a Trace’, ‘Joan of Arcadia’, ‘The Sarah Silverman Program’, ‘Children’s Hospital’, and ‘Ghost Whisperer.’ Laura’s major breakthrough was when she landed the role of Ally Dawson for the Disney Channel Series ‘Austin and Ally’, in 2011. The show had a successful run for 4 years which propelled Laura to international fame. On a more personal level, she says that ‘Austin and Ally’ also helped her overcome her insecurities about her singing, and helped her become more confident. She also starred in the movies ‘A Sort of Homecoming’ and ‘Bad Hair Day’, as one of the lead characters. She was also one of the first five classmates in the show ‘Are You Smarter Than A 5th Grader?’ Although she began her career in the acting industry, singing has always been Laura’s first love. Her first single ‘Boombox’, released in 2016, ranked 27 on Billboard and scored over 42 million views on YouTube. Her second single ‘La La’ ranked 123 on iTunes, thereby giving her a solid start on the Disney kid to pop star transition route! The latest feather in her cap is the record deal with Big Machine Records, the hit label that has famous singers like Taylor Swift on its roster, where she is recording her debut album.

Getting off the airplane after two days with no sleep

What Makes Laura Marano So Special

Apart from her acting-singing career, Laura is a philanthropist at heart. She was named the UNICEF Ambassador for Trick-or-Treat 2013, an initiative that encouraged children to raise money on Halloween for underprivileged children across the world. The very next year, she represented the Disney-Birds Eye Vegetables campaign, Step Up to the Plate, a drive to stimulate the teens in USA to eat healthier food. She knows that she has a huge teen following and she works hard to ensure that she sets a good example for them.

It's so easy nowadays to think the worst about the world around us; it's so easy to think low of people and humanity; it's so easy to forget about love. Don't fall into that way of thinking, especially when we have love all around us -we just need to look for it. As the holidays are getting closer (including my birthday ayyyyyeeeee), I'm not thinking about the hate and chaos we see everyday (though I'm definitely not ignoring it because we should be aware of everything going on), I'm just thinking about all the people I want to spend time with, I'm thinking about all the people in my life I want to share the table with. The list is endless for me, but @vanessamarano, you're probs in the top 5 ? think about which people are on that list for you❤️ #sponsored #gettogether @walmart #worldkindnessday

Having played the character of Ally Dawson on the ‘Austin and Ally’ show for five years, the dorky, musical genius is very close to Laura’s heart and the two have many traits in common. In fact, her famous ‘The Ally Way’ dance move was coined at her home after a Sunday dinner! Laura is also an Empire, Modern Family, Homeland, and Game of Thrones fan and a Potterhead! She intends to continue making music for the foreseeable future and her debut album is set to be released in the coming time.

Daya and I don't know how to Sit Still, Look Pretty @daya

Laura Marano is the daughter of Damiano Marano, a college professor, and Ellen Marano, a former actress-turned-acting-coach. She has an elder sister, Vanessa Marano, who stars as Bay on ABC Family’s ‘Switched at Birth.’ Despite her hectic schedule, Laura has enrolled at The University of Southern California as a part-time student. She believes that education keeps you grounded and hence intends to pursue her degree along with furthering her career. Laura has a dog named Velvet.

Laura has been playing the piano since she was 9 years old!