Laura Chinchilla Miranda is a Costa Rican politician who served as the first female president of Costa Rica from 2010 to 2014. Earlier, she served as vice president and minister of justice under president Óscar Arias Sánchez for two years before resigning to concentrate on her presidential campaign. She had an impressive public service career prior to becoming vice president. She also worked as a consultant in Latin America and Africa for various international agencies. She promoted citizen security and human rights throughout Latin America through various reform initiatives and was a strong supporter of trade and economic liberalization. She invested in children and youth programs and innovation and technology. Chinchilla focused on fighting domestic violence, crimes affecting children, organized crime, drug trafficking, and public corruption. She also stood against abortion and same-sex marriage, which pleased the voters in the predominantly Roman Catholic country. She has published many books, monographs, and articles relating to the administration of public security and justice, both in Spanish and English
Continue Reading Below Costa Rican People
Costa Rican Women
Georgetown University
Aries Leaders
Women Leaders
Childhood & Early Life
The eldest of four children, she was born in Carmen Central, San Jose, Costa Rica, on March 28, 1959 to a middle-class Roman Catholic family. Her parents, Rafael Ángel Chinchilla Fallas and Emilce Miranda Castillo had long been involved in national politics. Her father was a former Comptroller General of the Republic in the 1970s and 1980s.
She graduated from the University of Costa Rica with a bachelor's degree in political science in 1981. In 1989, she received her master's degree in public policy from Georgetown University in Washington, D.C.
Continue Reading Below
You May Like

The Sexiest Men Of 2020, Ranked
Career
In 1990, Laura Chinchilla began her career as a consultant specializing in judicial and public security reform in Latin America and Africa for various international agencies.
She conducted assessments for U.S. Agency for International Development (USAID), coordinated the studies and projects on judicial reform for the United Nations Program for Development (UNDP), and evaluated and advised the Inter-American Development Bank (IDB) on police reforms.
She delivered many lectures at international forums on matters of public security and police reforms and was a part of many reform initiatives throughout Latin America, such as the Project Advisory Committee of Civil Society and Public Safety for the Washington Office on Latin America (WOLA), and the Foundation for Peace and Democracy (FUNPADEM).
From 1994-1996, she worked in public sector management as Deputy Minister of Public Security under President José María Figueres Olsen of the National Liberation Party. This was her first public office position.
In 1996, Chinchilla was promoted as Minister of Public Safety. She held that post for two years. She served as Chair of the National Immigration Council and Chairman of the Joint Drug Intelligence Center. Additionally, she was a member of the National Drug Council, National Security Council, and Academic Council of the National Police Academy.
From 2002-2006, she served a term in Costa Rica's Legislative Assembly, representing the province of San José.
In 2006, following her term in the Legislative Assembly, Chinchilla was elected Vice President and Minister of Justice under newly-elected president Óscar Arias Sánchez. Upon Sánchez's endorsement of her candidature as his successor, she resigned her vice presidential position on October 8, 2008 to focus on her presidential campaign.
On February 7, 2010, she won the Costa Rican presidential election with 46.8 percent of the votes. During her term, she concentrated on fiscal reforms and emphasized ecotourism. As a social conservative, she stood against same-sex marriage and abortion, but supported the need for a legal frame to provide fundamental rights to same-sex couples. She served as president for four years.
Major Works
Laura Chinchilla has written books, monographs, and articles in Spanish and English on many subjects, including the administration of justice, public safety, and police reforms.
Awards & Achievements
Laura Chinchilla Miranda was a member of Costa Rica's Legislative Assembly from 2002-2006.
From 2006-2008, she served as Vice President and Minister of Justice of Costa Rica.
On February 7, 2010, she became the first female president of Costa Rica and served a four-year term.
In 2011, she received "Excellence in National Stewardship of the Oceans" award, recognizing her efforts for the conservation and sustainable management of the nation’s ocean resources.
In 2012, the mayor of Seoul, Park Won-soon, gave her the title of honorary citizen of the South Korean capital because of her shared values for technology, innovation, and respect for the environment.In 2013, she was honored with the "Shark Guardian of the Year" award from the German environmental group called Sharkproject, for strengthening her country's anti-finning law by signing a blanket ban on shark finning and shark fin imports.
Personal Life & Legacy
She married Mario Alberto Madrigal Díaz on January 23, 1982. They divorced on May 22, 1985.
In 1996, she had a son, José María Rico Chinchilla, with José María Rico Cueto, a Spanish lawyer who also holds Canadian citizenship. They were wed on March 26, 2000.
Trivia
With an approval rating of only 13%, she was the least popular president in Latin America in 2013, according to an opinion poll by the firm Consulta Mitofsky
You May Like

See the events in life of Laura Chinchilla in Chronological Order 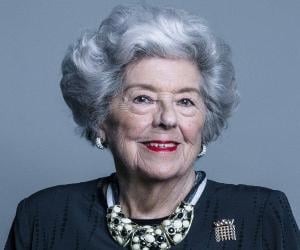