Advanced Search
Lana Turner was an American actress popular during the 1940s and 1950s. Discovered at a drug store, she made her screen debut in ‘A Star Is Born’. She became famous as the "Sweater Girl” in ‘They Won't Forget’. Soon offers came pouring with significant roles in the ‘Dramatic School’, ‘Love Finds Andy Hardy’, ‘Ziegfeld Girl’, ‘Dr. Jekyll and Mr. Hyde’, ‘Honky Tonk’, and ‘Johnny Eager’. Turner came into her own in films such as, ‘The Postman Always Rings Twice’, ‘Diane’, ‘Another Time, Another Place’, ‘Portrait in Black’ and ‘Imitation of Life’. Her private life, however, was a mess. She was married eight times and battled alcoholism. Her longtime boyfriend, mobster Johnny Stompanato, was stabbed to death by her daughter Cheryl Crane, during one of their many violent arguments. Cheryl was acquitted with the court ruling it was justifiable homicide. The actress got her biggest break starring in Peyton Place, which received an Oscar nomination for her role. Turner continued to appear in films until 1980 and had a recurring role as Jacqueline Perrault on the TV series "Falcon Crest’. She published her autobiography, "Lana: The Lady, The Legend, The Truth" and died after a long bout with cancer American Celebrities
American Women
Idaho Actresses
Female Models
Aquarius Models
Childhood & Early Life
Lana Turner was born Julia Jean Mildred Francis Turner on February 8, 1921 in Wallace, Idaho, and was the only daughter of John Virgil Turner, a miner from Alabama and Mildred Frances Cowan, a sixteen-year-old native of Arkansas.
She was called Judy by her family and friends and had a difficult childhood. Her parents separated and her father was murdered for the money he won at a craps game.
Her mother developed health problems and was advised by her doctor to move to a drier climate. They moved to Los Angeles in 1931where her mother worked 80 hours a week as a beautician 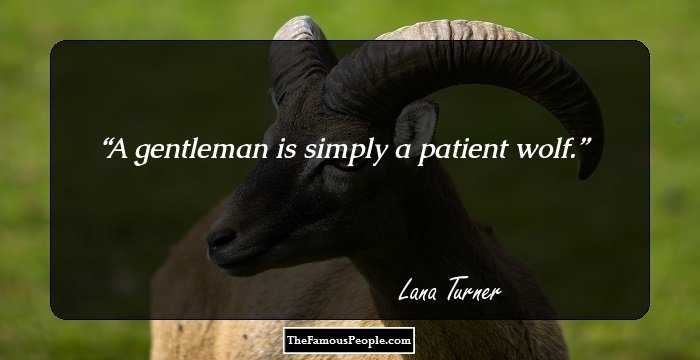 Continue Reading Below
Career
Turner was spotted by William R. Wilkerson, publisher of The Hollywood Reporter. Attracted by her beauty, he referred her to comedian/talent agent Zeppo Marx whose agency immediately signed her.
Her first film was ‘They Won't Forget’ (1937).It was directed by Mervyn LeRoy. She was nicknamed "The Sweater Girl" from her form-fitting attire in the film which she detested throughout her entire career.
In 1937, she signed a contract with MGM and acted in several teen-oriented films including the flirtatious girl described as "the kissing bug,” opposite teen idol Mickey Rooney in ‘Love Finds Andy Hardy’.
In the early 1940s, she starred in films such as, ‘Dr. Jekyll and Mr. Hyde’ with Spencer Tracy, and Ingrid Bergman, and with Clark Gable in ‘Honky Tonk’, and ‘Somewhere I'll Find You ‘.
In ‘Ziegfeld Girl’ (1941), she starred alongside James Stewart, Judy Garland, and Hedy Lamarrthe. The film tells the parallel stories of three women-performers in the renowned Broadway show the Ziegfeld Follies.
In ‘Slightly Dangerous’, a 1943 romantic comedy film, she played Peggy Evans, a bored young woman in a dead-end job and ends up impersonating the long-lost daughter of a millionaire in New York City.
In the Technicolor adventure film adaptation of the classic novel by Alexandre Dumas ‘The Three Musketeers’, she starred opposite Gene Kelly. The film is remembered for its well-choreographed fight scenes.
In ‘Mr. Imperium’, a1951 romantic musical drama film made by MGM, and ‘The Merry Widow’, a film adaptation of a operetta, the actress’ singing voice was dubbed by Trudy Erwin.
In ‘Diane’, a 1956 historical film about the life of Diane de Poitiers, a French noblewoman, she took the lead role with the film’s tagline being ‘Lana Turner dares the devil in Diane’.
Continue Reading Below
’Another Time, Another Place’ is a 1958 melodrama in which she plays an American reporter Sara Scott who begins an affair with a British reporter Mark Trevor played by Sean Connery.
In ‘By Love Possessed’, a 1961drama film directed by John Sturges, she was the leading lady. This became the first in-flight movie to be shown on a scheduled airline flight, by Trans World Airlines.
‘Portrait in Black’, a 1960 thriller film, paired her with Anthony Quinn as lovers who murder her cruel, but wealthy husband but blackmail, guilt and suspicion are the unanticipated results.
In her last major starring role she played a fallen woman on trial for murder who is defended by the son she abandoned years earlier in the 1966 film ‘Madame X’.
Between 1969 and 1984, she appeared in several television roles such as in ABC's Harold Robbins' The Survivors and in ‘Falcon Crest’ as the mysterious Jaqueline Perrault and The Love Boat. 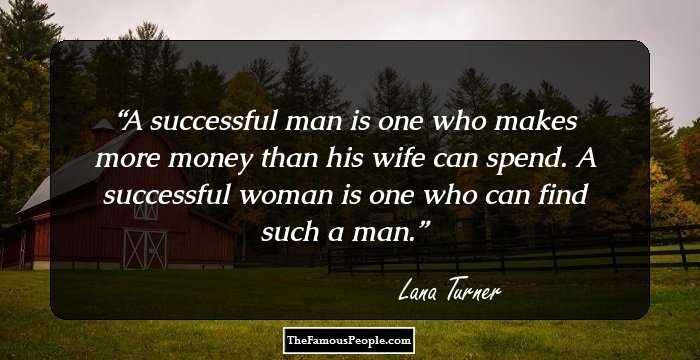 Quotes: Money
Major Works
She gave a stellar performance in ‘The Postman Always Rings Twice’, a 1946 drama-film noir based on a novel by James M. Cain. A big hit, the film recorded a profit of $1.6 million.
She starred with Hope Lange in ‘Peyton Place’, a 1957 film based on Grace Metalious’ novel and depicted the lives of the residents of a small New England mill town surrounded by moral hypocrisy.
In ‘Imitation of Life’ (1959), she proved critics wrong with her flawless performance as Lora Meredith, a struggling actress with a young daughter. The film’s box-office success proved she had not lost her edge.
Continue Reading Below
Awards
Turner was nominated for the Academy Awards and also the Golden Laurel in 1958 in the Best Actress in a Leading Role category for her performance in Peyton Place.
In 1960, she was honored with a Star on the Walk of Fame in the motion picture category at 6241 Hollywood Blvd. 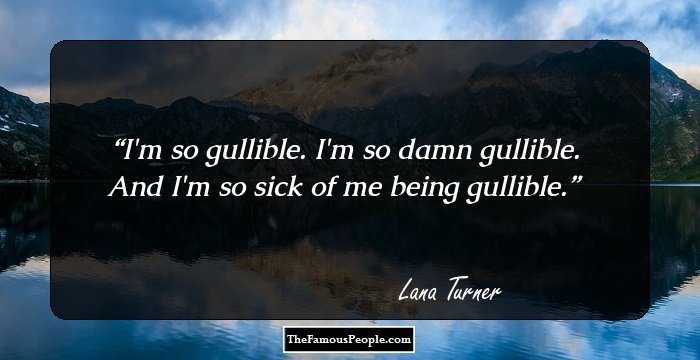 Quotes: Me
Personal Life & Legacy
Turner married eight times to seven different husbands and later famously said, "My goal was to have one husband and seven children, but it turned out to be the other way around.
In 1958, her daughter, Cheryl Crane, stabbed Turner's lover Johnny Stompanato to death. It brought considerable media attention and was deemed justifiable homicide at a coroner's inquest.
Turner died of complications from throat cancer and was survived by Cheryl Crane, her only child. She willed the majority of her estate left to Carmen Lopez Cruz, her maid for 45 years.
Trivia
This famous Hollywood actress married eight times but was never married for more than five years at a stretch - her longest marriage was to Henry Topping at 4 Years 7 Months 14 Days.
This famous quote is attributed to her- "A successful man is one who makes more money than a wife can spend. A successful woman is one who can find such a man."

See the events in life of Lana Turner in Chronological Order