(German-American Composer Best Known for His Work ‘The Threepenny Opera’)

Kurt Weill was a German-American composer best known for revolutionizing opera music composing with his sharp social satire style. Born to a musician father, Kurt became interested in the field early on in his life. He began learning piano at a young age and after completing his early education, he moved to Berlin for higher studies. He began composing for operas and became a part of a local leftist group of musicians named Novembergruppe. He was politically motivated, in his art and works as well. His collaborations with musician Bertolt Brecht brought him nationwide glory. The two reached the heights of fame in Weimar Germany in the early 20s composing successful operas such as The Threepenny Opera and Rise and Fall of the City of Mahagonny. In the early 1930s, the rise of the right-wing in Germany had him facing troubles. Being a staunch leftist, he was threatened by the regime and eventually, he left for the USA. After struggling to find a footing in a foreign country, Kurt eventually got successful there as well, following some successful works such as Lady in the Dark, One Touch of Venus and Knickerbocker Holiday among others.

Johannes Brahms
DID WE MISS SOMEONE?
CLICK HERE AND TELL US
WE'LL MAKE SURE
THEY'RE HERE A.S.A.P
Quick Facts

Kurt Weill was born Kurt Julian Weill, on March 2, 1990, in Dessau, Germany, to Albert and Emma Weill. He was born as one among four children in the family. His father was actively involved with the music industry and worked as a cantor, who sang in religious ceremonies.

Kurt got interested in making music at an early age and was supported by his family in his endeavours to learn music. He began playing the piano when he was 12 years old and took lessons from Albert Bing. He also received training in music theory, composition and conducting by the age of 13, he had written his first song titled Mi Addir: A Jewish Wedding Song. It is also known to be his earliest preserved music.

He began composing in his early teen years and exhibited a great inclination towards vocal music, which led to his increasing interest in musical theatre. At the age of 15, he had his first public piano concert where he served as both the soloist and the accompanist. Following his early lessons from Dessau, he wanted to further his education and hence, he made the big move to Berlin.

He got enrolled into the  Berliner Hochschule für Musik at the age of 18 and furthered his education under the expertise of teachers such as  Engelbert Humperdinck and Ferruccio Busoni. Although he was a poor student, he was smart. He began giving music lessons to support himself and also directed choirs. 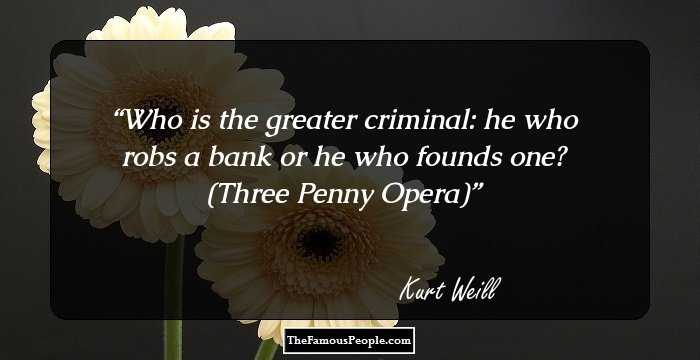 His family faced a troubled financial situation following the aftermath of WW1. It compelled Kurt to return back to Dessau and work to make his family lead a comfortable life. He began working at a local theatre as a répétiteur and later joined several other operas as a music composer and a Kapellmeister. Around the same time, he also began composing music. When his family’s financial situation got a little better, he moved back to Berlin in 1920.

Post the First World War, the cultural and artistic environment of Berlin was thriving in the early 1920s. Soon after returning, ace composer Ferruccio Busoni took him in as a student. He was a part of the movement where several new artists emerged on the scene. Around that time, he joined a local Berlin group of leftist artists, called Novembergruppe. The group had other musicians such as Hanns Eisler and Stefan Wolpe in it. They performed together, sometimes separately, on the music written by legends such as Berg, Schoenberg, Stravinsky and Krenek.

In the early parts of his career as an instrumental composer, he mostly worked on surreal and abstract themes. Around the mid-1920s he composed two operas, Der Protagonist and Royal Palace, that established him as a promising young composer. His style was highly personal and his energy was admired by his contemporaries. Among all his successful collaborations, the one with Bertolt Brecht was considered as most popular. Despite the fact that they both had opposing political ideologies, they worked together rather well.

In 1928 came the big break of his career when he composed The Threepenny Opera in collaboration with Brecht, which became a massive success. It immediately established Kurt as the youngest most successful composer of Weimar Germany. His music was considered to be powerful, cynical and political in nature. It made Kurt an immediate cultural icon in Germany.

In March 1930 their collaboration produced yet another successful opera titled Rise and Fall of City of Mahagonny. However, around this time both Brecht and Weill began having disagreements over their political differences. In the early 1930s, the growing right-wing in form of the Nazi Party was slowly beginning to impact his career. He initially misread the rise of the German right-wing and took it lightly.

The theatre owner stopped working with Kurt and he slowly began facing the blows due to his leftist ideology. When he came to know that he and his wife were on the Nazi blacklist and can be arrested, they decided to move somewhere else. Kurt moved to Paris with his wife and later, moved to America.

In the initial years after moving to America in the early 1930s, Kurt struggled even to support himself. His plays were largely unsuccessful and he was looked down upon by his American contemporaries. He composed film music and collaborated with a few local composers to keep himself in the game. One of these collaborations was an anti-war play titled Johnny Johnson.

In 1938, he composed the musical titled Knickerbocker Holiday which brought him much-needed fame in the USA. He thus gained access to the American Broadway culture. In the following years of World War II, he further composed music for Lady in the Dark and One Touch of Venus, which became major hits.

Even when there was an anti-Jew sentiment in the country, he never forgot his roots and composed many operas that talked about the plights of the Jews in Europe.

In the following years, he furthered his descent into the American theatrical scenes with plays such as Lost in the Stars and Down in the Valley. However, despite being quite successful in his endeavours in America, he never achieved the level of fame and riches that he once held in Germany.

Apart from plays and musicals, Kurt also composed some highly popular songs such as Alabama Song, Speak Low and My Ship.

Kurt Weill married Lotte Lenya, an Austrian singer, in 1926. Following their struggles to stay back in Germany, the couple divorced in 1933. However, they met again in the USA and got married again and remained together until 1950.

Shortly after celebrating his 50th birthday, Kurt suffered a heart attack and passed away on April 3, 1950.

Despite the fact that Kurt was never fully appreciated or accepted in the USA, he loved the country. In one of his statements, he said that reason America accepted him was that he was open to adapting to the American way of life.

Kurt Weill’s music remains influential in both popular and classic contexts. His music has been recorded by multiple composers since his demise such as Nina Simone, Frank Sinatra, David Bowie and Robbie Williams etc.

In 1993, the Kurt Weill Centre was opened. It's a cultural site located in his birthplace of Dessau.

In 1962, his wife Lotte Lonya founded the Kurt Weill Foundation for Music. Its a non-profit organization built to preserve its legacy of Kurt.

See the events in life of Kurt Weill in Chronological Order