Known as the ‘Shakespeare of Music,’ Ludwig van Beethoven was one of the greatest composers ever. He was one among the pioneers of instrumental music in European culture, and played a crucial role in the development of tonal music. Though deafness restricted him from being active socially, it never trammelled his creativity. During the premiere of his final masterpiece ‘Ninth Symphony,’ Beethoven had to turn around to view the clapping of the audience as he had become completely deaf by then. Despite his loss of hearing, he became a colossus of music, whose fame continues to soar even today. Influenced greatly by Mozart and Haydn, he enriched his style with the power of romanticism. The intricacy and vastness of his works went much beyond the age, baffled his contemporaries, and continues to mystify the professionals and audiences alike. His operas, symphonies, and sonatas are still sung and performed all over the world. Johann Pachelbel
DID WE MISS SOMEONE?
CLICK HERE AND TELL US
WE'LL MAKE SURE
THEY'RE HERE A.S.A.P
Quick Facts 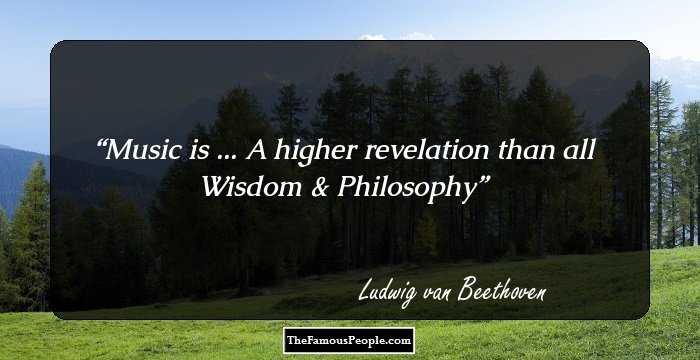 Quotes: Music
Continue Reading Below
Music Training
Ludwig van Beethoven began his music training under his father. He learnt clavier and violin from him from the age of five. However, Beethoven did not have pleasant experience learning from his father as he was regularly flogged and locked in a cellar for making the slightest of mistakes.
His father, who wanted to make another Mozart out of him, would beat him up brutally, while yelling he was an embarrassment to the family. Weeping, the boy would continue to play until he reached the notes while standing on a tool.
Apart from studying music from his father, he also took lessons from Tobias Friedrich Pfeiffer, a family friend, who would often drag him out of his bed in the middle of the night to practice playing keyboard. Another important teacher of Beethoven during this period was Gilles van den Eeden, a local church organist.
On March 26, 1778, Beethoven gave his first public performance at Cologne. Although he was seven years old at the time, his father declared his age to be six as Mozart had given his first performance at the age of six; his father did not want him to be any lesser than Mozart himself.
Sometime now, he was admitted to a Latin grade school called ‘Tirocinium.’ He was an average student, which led to the belief that he might have suffered from mild dyslexia during his early days. He had once said, ‘music comes to me more readily than words.’
In 1779, he was withdrawn from school to study composition with court organist Christian Gottlob Neefe. In 1783, with Neefe’s help, Beethoven wrote his first composition, which was later called ‘WoO 63’ (Werke ohne Opuszahl or Works without opus number).
Also in 1783, he composed three piano sonatas, collectively known as ‘Kurfurst,’ which he dedicated to the Elector Maximilian Friedrich. Impressed with his work, the Elector subsidized the young man’s musical studies. 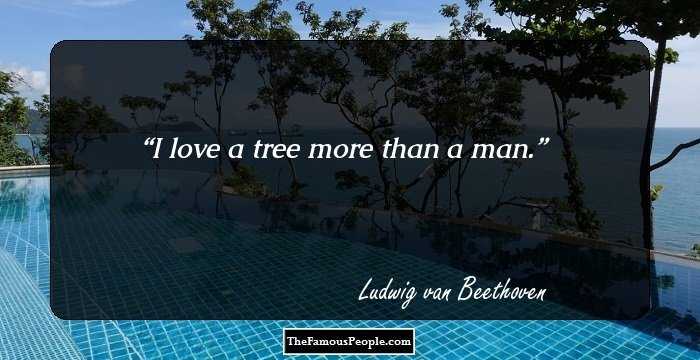 Quotes: Love, I
Beginning a Career in Music
By 1784, his father’s alcoholism worsened to such an extent that he could no longer support his family. Therefore, at the age of 14, Beethoven started his career. He successfully applied for the position of an assistant organist at the court chapel, receiving a modest salary of 150 florins.
Continue Reading Below
By 1787, the Elector sent Beethoven to Vienna; possibly to study with Mozart. But within two weeks, his mother fell seriously ill, which forced him to return home. His mother died soon after and his father’s dependency on alcohol worsened.
Ludwig van Beethoven now had to take care of his brothers and run the household, which he did by giving music lessons to the children of late Joseph von Breuning. Gradually, he started teaching other wealthy pupils. Soon, the Breuning mansion became his second home.
In 1788, at the house of von Breuning, Beethoven met Count Ferdinand von Waldstein. Belonging to Vienna’s highest aristocracy, Waldstein not only had tremendous influence, but also loved music. Eventually, he became one of Beethoven’s lifelong friends and financial supporter.
In 1790, Beethoven received his first commission, possibly on the recommendation of Neefe. He wrote two Emperor Cantatas (WoO 87, WoO 88) on the death of Holy Roman Emperor Joseph II, and the accession of Leopold II. However, they were not performed at the time, and remained lost until 1880.
From 1790 to 1792, he composed a number of pieces, most of which are now listed under ‘WoO.’ In the late 1790, Beethoven was introduced to Joseph Haydn when the latter visited Bonn on his way to London. They met again in Bonn in 1792 on his return trip to Vienna.
In Vienna
On November 1792, sponsored by Count Ferdinand von Waldstein, Beethoven moved to Vienna to study under Haydn. Initially, he did not try to establish himself as a composer. Instead, he concentrated on studying counterpoint with him, concurrently receiving instructions from other masters.
He also started performing in various salons of the nobility, establishing himself as a piano virtuoso by 1793. The following year, as Haydn set out on another trip, the Elector expected him to return to Bonn. His stipend was stopped when he refused to follow his orders.
On March 29, 1795, he made his public debut, possibly performing his first piano concerto. Shortly thereafter, he published a series of three piano trios, namely ‘Opus 1,’ earning a great critical as well as commercial success.
In 1796, Beethoven traveled to northern Germany, visiting among other places, the court of King Frederick William of Prussia in Berlin. During this period, he composed the ‘Op. 5 Violoncello.’
Continue Reading Below
In 1798, commissioned by Prince Lobkowitz, he started writing his first string quartets, which would later be numbered as ‘Op 18.’ He completed the project in 1800. Meanwhile, in 1799, he completed ‘Opus 20,’ one of his most popular works.
On April 2, 1800, he performed his ‘Symphony No. 1’ in C major at Vienna’s ‘Royal Imperial Theater.’ Although he did not like this particular work, it would later establish him as one of the most celebrated composers of his time.
In 1801, Beethoven published ‘Six String Quarters, Op 18,’ establishing his mastery over the Viennese form of music which was developed by Mozart and Haydn. Also in the same year, he composed his first ballet ‘The Creatures of Prometheus,’ which received 27 performances at the ‘Imperial Court Theater.’
In the spring of 1802, he completed his ‘Second Symphony.’ However, it was premiered almost a year later in April 1803, earning him huge profit. Also from 1802, his brother Kaspar began to manage his financial matters, securing better deals from his publishers. 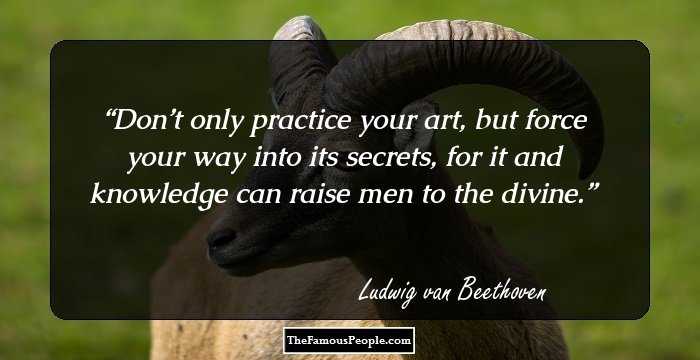 Quotes: Art
Second Period & Loss of Hearing
From 1798, Ludwig van Beethoven started experiencing hearing loss. By 1802, his condition had become so severe that he felt suicidal. On April 1802, he moved to Heiligenstadt, located just outside Vienna, trying to come to terms with his deafness. Remaining there till October, he decided to live for his art.
Despite his growing deafness, he started producing astonishingly large volume of music. From 1802 to 1812, he composed five sets of piano variations, seven piano sonatas, six symphonies, four solo concerti, four overtures, four trios, five string quartets, six string sonatas, two sextets, one opera, and 72 songs.
In 1808, Beethoven received invitation for the directorship of Kapellmeister. To keep him in Vienna, his wealthy patrons pledged him an annual salary of 4,000 florins. Thus, he became the first musician to be freed from the drudgery of service which allowed him to concentrate full time on composing.
This period between 1802 and 1812 is known as his ‘middle’ or ‘heroic’ period. Most popular among his works from this period were ‘Moonlight Sonata,’ ‘Kreutzer’ violin sonata, opera ‘Fidelio,’ and his symphonies, numbering three to eight.
Continue Reading Below
In 1815, he tried to perform for the last time, but was forced to give up due to his loss of hearing. Gradually, he became short tempered and miserable. His brother’s death in the same year added to his frustration. For the next three years, he produced little music.
Third Period
In 1818, when he could no longer hear, he started communicating through writing, carrying with him a set of books, which later came to be known as ‘Conversation Books.’ These books later provided insights into his thinking and how he wanted his music to be performed.
In spite of his total loss of hearing and his preoccupation with legal battles with his sister-in-law, Beethoven continued to write. He composed a collection of songs as well as ‘Hammerklavier Sonata’ in 1818. In the same year, he also started working on his epic ‘Ninth Symphony.’
In 1819, he started working on the ‘Diabelli Variations’ and ‘Missa Solemnis.’ Unfortunately, due to ill-health and legal battles, he could not complete the last mentioned work before 1823. Meanwhile, in 1822, the ‘Philharmonic Society of London’ commissioned him to write a symphony.
The commission spurred him to complete his ‘Ninth Symphony.’ It was performed first on 7 May 1824 at the ‘Kärntnertortheater’ to a standing ovation, and was performed again on 24 May 1824. It was his last public concert.
Also in 1822, Prince Nikolas Golitsin of St. Petersburg had commissioned him to write three string quartets. In 1824, after completing the ‘Ninth Symphony,’ Beethoven produced a series of string quarters, collectively known as ‘Late Quartets.’ This was his last major work.
Major Works
Ludwig van Beethoven is best remembered for his ‘Symphony No. 9 in D minor, Op. 125.’ Today, the work is considered to be the best-known work in the entire Western musical canon. In 2001, its original hand-written manuscript was added to the ‘United Nations Memory of the World Programme Heritage’ list.
Personal Life & Legacy
Ludwig van Beethoven could not develop a lasting relationship with any woman, and remained a bachelor till his death. His sole heir was his nephew Karl.
Before his death in 1815, his brother Kaspar left Beethoven and his wife in charge of Karl. After Kaspar’s death, Beethoven fought a legal battle with his sister-in-law, ultimately winning the sole custody of his nephew.
On December 1826, Beethoven became seriously ill, and died three months later on 26 March 1827. Autopsy reports revealed significant liver damage as well as dilation of the auditory and other related nerves.
His funeral, which took place on 29 March 1827, was attended by around 20,000 people. After a requiem mass at the church of the Holy Trinity, his mortal remains were buried at the Währing cemetery. In 1888, his mortal remains were moved to Zentralfriedhof.
On 12 August 1845, ‘Beethoven Monument’ was unveiled in Bonn. The city also has a concert hall named ‘Beethovenhalle,’ while his birth house at Bonngasse 20 has been turned into a museum.
The largest crater in mercury, located at latitude 20°S, longitude 124°W, has been named after him.