(One of the Romantic Period's Most Revered and Popular Composers)

Johannes Brahms was a well-known German composer and pianist best remembered for his choral work ‘A German Requiem.’ Although the experimental musicians like the followers of Liszt and Wagner considered him old fashioned, critics in general accorded him the same rank as Bach and Beethoven. In fact, all through his life he had championed the Classical tradition of Joseph Haydn, Mozart, and Beethoven and his works combined the warmth of the Romantic era with the restrain of classical music. Born to a struggling musician, he began performing in taverns and dance halls at the age of thirteen. Very soon, he began to write his own music. By the time he was twenty, he was able to catch the attention of many established musicians and music critics. However, the real fame came when he settled in Vienna in early 1860s and wrote his famous piece ‘A German Requiem’. Brahms was always a perfectionist and rewrote each work several times. In his long career, he had composed varied types of works such as symphonies, concerti, chamber music, piano works and choral compositions. In addition to that, he had also left more than two hundred songs. Johann Pachelbel
DID WE MISS SOMEONE?
CLICK HERE AND TELL US
WE'LL MAKE SURE
THEY'RE HERE A.S.A.P
Quick Facts

German People
Composers
Conductors
German Men
Male Pianists
Childhood & Early Life
Johannes Brahms was born on 7 May, 1833 in Hamburg. His father, Johann Jakob Brahms, was a musician from Heide, who came to Hamburg to pursue a career in music. His mother, Johanna Henrika Christiane Nissen, was a seamstress. He was born the second of their three children.
Johannes had his first musical training from his father. When he turned seven, he started taking piano lessons from Otto Friedrich Willibald Cossel and later from Eduard Marxsen.
When Brahms turned thirteen, he began contributing to the family income by playing at taverns, restaurants and local dance halls in the city’s dock area. Working for a prolonged period in smoke laden rooms soon affected his health and he became ill.
In 1847, he was sent to Winsen an der Luhe for rest. Here he conducted male choir and for it, he wrote his first choral composition. On returning to Hamburg, he resumed playing at taverns and to earn more money, started giving piano lessons.
Sometime now, he also started learning cello, but it came to an abrupt end when his instructor ran away with his instrument. During this period, he also performed in several concerts and began composing music for piano. 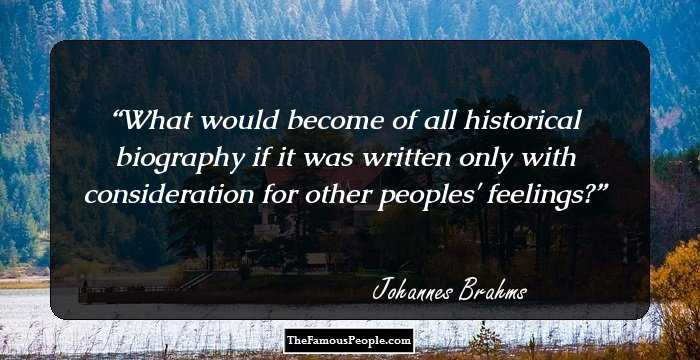 Continue Reading Below
Career
In 1850, Brahms met Hungarian violinist Eduard Reményi, who introduced him to Hungarian gypsy music. For the next three years he composed several pieces for piano and then in April 1853, the two musicians went on a tour that actually launched Brahms in his career.
In May 1853, Brahms and Reményi went to Hanover and there they visited Joseph Joachim, a well-known Hungarian violinist. Earlier Brahms had heard Joachim play solo in violin concerto and was very much impressed. He now played a few of his pieces to Joachim.
Joachim was so impressed by what he heard that he provided Brahms with a letter of recommendation to Robert Schumann, a well known composer and influential music critic. The two also became life-long friends and close collaborators.
Sometime after that, Brahms and Reményi travelled to the Court of Weimar, where they were introduced to Franz Liszt. The elder musician was much impressed by Brahms’ work and invited him to join his group. However, Brahms failed to show proper appreciation of Liszt’s work, which offended Reményi and the two parted their ways.
On 1 October 1853, after a walking tour in the Rhineland, Brahms went to Düsseldorf to meet Schumann, armed with Joachim’s letter of recommendation. He had earlier sent the elder musician some of his work; but those were returned unopened. This time, the Schumanns welcomed him into their home.
Both Robert and his wife Clara were highly impressed by his music. Wanting to introduce the still unknown musician to the world, Schumann wrote an article in the 28 October 1853 issue of ‘Neue Zeitschrift für Musik’. In it, he praised Brahms so much that some even became skeptical.
Overnight, Brahms became famous. However, there was a long way to go before he could actually establish himself; at the same time, he felt compelled to work harder so as to live up to the expectation created by the article.
Thereafter, Brahms remained at Hanover, working with Joachim. In 1854, Schumann became mentally ill and had to be hospitalized. Brahms set aside his musical career and moved to Düsseldorf to help Clara in her hour of crisis.
Eventually, he took up an apartment above Clara’s and regularly visited Schumann at the sanatorium. He also looked after the children when Clara went away on her long concert tours. Gradually, as Clara’s eldest daughter began to take charge Brahms too went back to his work.
Continue Reading Below
Schumann died in 1856. The following year, Brahms was appointed court music teacher and conductor at Detmold, the capital city of Principality of Lippe. For the next couple of years, he divided his time between Detmold, Göttingen and Hamburg, where in 1859, he formed and conducted a ladies’ choir.
In spite of such a hectic schedule, the period turned out to be highly productive for him. ‘Piano Concerto No. 1 in D Minor’ (1854–58) and ‘String Sextet in B-flat Major’ (1858–60) are two of his most famous works of this period.
In 1862, Brahms journeyed to Vienna, staying there for the winter. On returning to Hamburg, he unsuccessfully tried to secure the position of the conductor at the Hamburg Philharmonic concerts.
Therefore he went back to Vienna in 1863 and assumed the post of the director of Singakademie, a renowned choral society. Soon a conflict arose between his followers and the followers of Richard Wagner and Franz Liszt, who represented the new school of music.
Therefore in 1864, Brahms resigned from his post. Initially, he thought of taking up position elsewhere but later he decided to settle permanently in Vienna and concentrate fully on composing.
1865, he began to compose 'Eindeutsches Requiem, nach Worten der heiligen Schrift' (A German Requiem, to Words of the Holy Scriptures), his largest choral work. Premiered in 1868, the work established him as one of the greatest European composers.
As his fame grew, he not only began to compose more and more pieces, but also went on musical tours across Europe. Then in 1872, he succeeded Anton Rubinstein as the Director of Gesellschaft der Musikfreunde in Wien (Society of Friends of the Music in Vienna) and served in this capacity till 1875.
Thereafter, he did not accept any other formal position. In his later years, he helped to promote unknown talents; Antonín Dvořák being one of them.
In 1876, Brahms completed his first symphony. Its English premiere was held in Cambridge on 8 March 1877 and was conducted by Joachim. Later in 1877, 1883, and 1885, he published three other symphonies.
Continue Reading Below
Meanwhile in 1881, he completed his second piano concerto titled, ‘Piano Concerto No. 2 in B-flat major’, a work he started in 1878. In the premier held in Budapest on November 9, 1881, Brahms was the soloist. In the same year, he also tried out his new orchestral works with the Meiningen Court Orchestra.
In 1890, he published ‘String Quintet in G Major’ and declared it to be his last work. However, the very next year, he composed ‘Clarinet Trio in A minor, Op. 114’ for the clarinetist Richard Mühlfeld. Later in 1894, he also composed two Clarinet Sonatas. 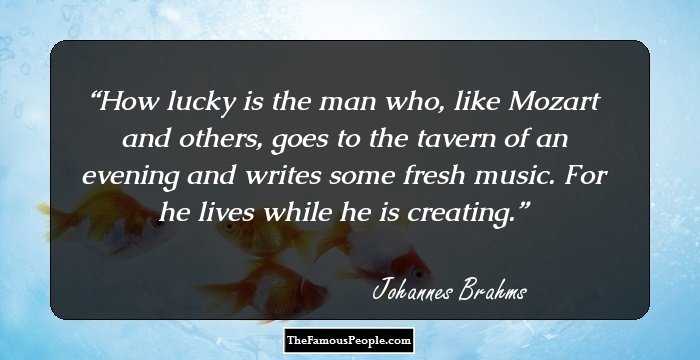 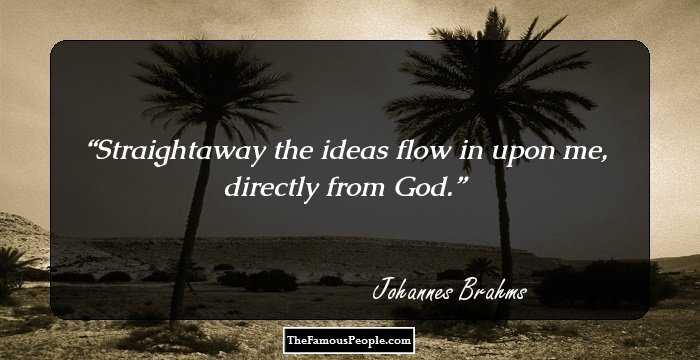 Quotes By Johannes Brahms | Quote Of The Day | Top 100 Quotes

See the events in life of Johannes Brahms in Chronological Order