Advanced Search
Richard Wagner was a German composer, theatre director and conductor best remembered for his operas and music dramas. Hebecame interested in musical compositions at a very young age as his ambition was acquired based on his family background. Throughout his career he was met with oodles of controversies. His unabashed love affairs and polemic compositions gathered both admiration and antagonism. He composed verses against popular beliefs and had them performed at popular theatres. It was owing to his novel ideas that he brought creative finesse to complex ‘music dramas’ such as the ‘Ring Cycle’. Unlike several other composers or theatrical directors of his time, Wagner not only wrote the libretto but also composed music for his shows. Towards the later part of his career he further refined his works by directing and composing difficult orchestration. Yet, despitehaving such a promising career,his life was a struggle with creditors at his heel and numerous scandals clouding his name. Hildegard of Bi...
DID WE MISS SOMEONE?
CLICK HERE AND TELL US
WE'LL MAKE SURE
THEY'RE HERE A.S.A.P
Quick Facts

German People
Conductors
Biographers
German Men
Leipzig University
Childhood & Early Life
Richard Wagner was born on 22 May 1813 in Leipzig, Germany, to a baker’s daughter, Johanna Rosine and her husband Carl Friedrich Wagner, a clerk in the police service who died of typhus six months after Richard’s birth.
He was the 9th child of his parents. After Carl’s death, his mother moved along with her children to live with a friend of her deceased husband, Ludwig Geyer in Dresden.
His mother had an affair with Geyer, and probably went on to marry him, but no church documents have been retrieved to document the same.
Until he was fourteen years old, Richard believed that Geyer was his biological father; he was named Wagner after he learned that he was originally the son of Carl Wagner and Geyer was his stepfather.
Ludwig Geyer had a mighty influence on his life. Geyer was a painter, actor and poet and it was through him that Wagner experienced theatre.
Not only his step-father but his biological sisters were also opera singers and thus, a new passion was born in him that led him to opera and dramatization.
In 1820, his stepfather put him into Pastor Wetzel’s school in Possendorf, here he received tutelage in piano by a Latin teacher, who described his talent as sheer torture for musical instruments.
The next year, ill fate befell his familyonce again when his stepfather passed away and he was enrolled into the Kreuzschule boarding school. Here, found his passion as a playwright and was inspired by Beethoven’s 9th Symphony.
He was just a young teenager when he wrote his first drama ‘Leubald’, a tragic play. But it was only in 1829, after watching a performance of Wilhelmine Schroder-Devrient, did his drive to compose both music and script escalate to its highest peak.
He joined Leipzig University and took lessons from Thomaskantor Theodor Weinlig in 1831. Weinlig was pleasantly surprised by Wagner’s passion and declined any fees for his lessons. 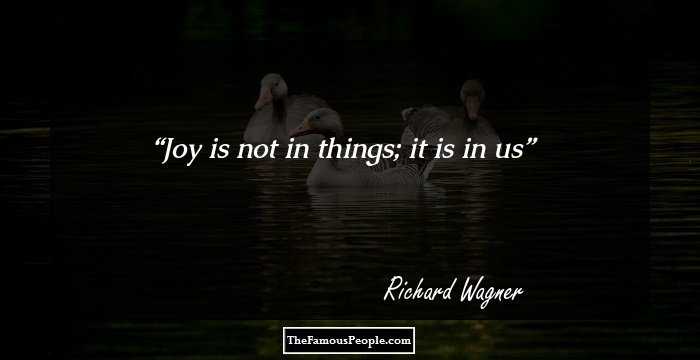 Quotes: Happiness
Continue Reading Below
As a Composer
Richard Wagner’s brother Albert helped him become a choir master in 1833. In the same year he composed his first piece of opera called ‘Die Feen’ which when translated means ‘The Fairies’.
However, he couldn’t stage his first opera. In order to attain professional growth, in 1834 he became a musical director at the opera house in Magdeburg.
It was during this time that he wrote ‘Das Liebesverbot’ or ‘The Ban on Love’, a piece similar to Shakespeare’s ‘Measure for Measure’, that was staged in 1836 at Magdeburg theatre itself.
Nonetheless, it was only performed once;curtains were drawn on the second show as the theatre shut down, which left him reeling from financial losses. 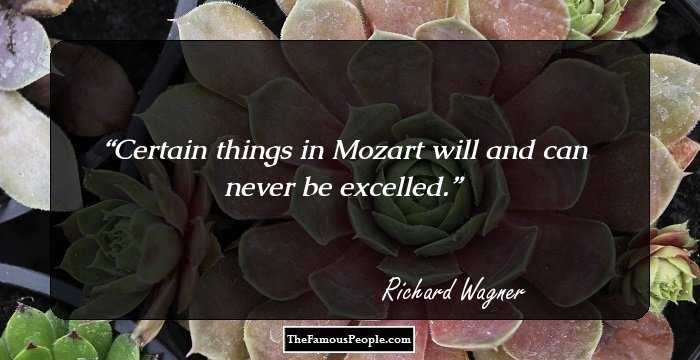 Quotes: Never, Will
A Disintegrating Career
At this gutted moment in his life, the actress Christine Wilhelmine ‘Minna’ Planer helped him get back on his feet by introducing him to the theatre at Konigsberg.
They married on 24 November 1836, but their love lasted only for six months as Planer left him for a wealthier man. The marriage being a failure urged Wagner to move to Riga.
At Riga he became the music director of a local theatre and aided Minna’s sister Amalie, as a singer at the theatre. This act of benevolence reconciled the separated couple and Minna came back into his life.
In the late 1830s Wagner was steeped in debt and in order to save himself from creditors, he escaped to Paris in search of wealth and success. He lived in France and hoped to prosper but found no opportunity and took a deep dislike for the French musical culture.
Continue Reading Below
Wagner
By 1840, Richard Wagner had completed his opera ‘Rienzi.’ He then returned to Germany in 1842, swearing to never leave his homeland again. The play was then staged in Dresden.
‘Rienzi’ did receive some success, but it wasn’t until 1845 at the premiere of ‘Tannhauser’ that Wagner received his first major success. At around this period he was also appointed the Royal Saxon Court Conductor.
In 1846, he had already completed half of his poem, ‘Lohengrin’ after which the inception of his most revered work in opera history—the ‘Der Ring des Nibelugen’ that spanned four dramas—ultimatelydawned on him. 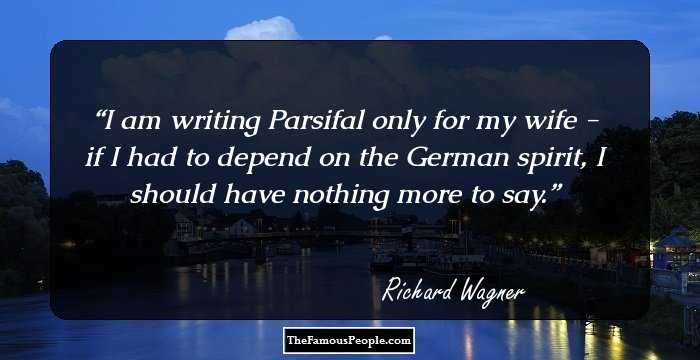 Quotes: I
Left-wing Politics & Exile
With rising success he gradually became involved in politics. He supported the left wing with his socialist ideals that he shared with August Rockel and Mikhail Bakunin.
He minutely supported the May Uprisings that occurred in Dresden on account of the new constitution declare by King Frederick Augustus II in 1849.
The uprisings ended with the defeat of the revolutionaries and warrants were issued in their names, thus Wagner absconded to Paris once again and then to Zurich spending the next twelve years in exile.
It was only in 1862 that the political ban on Wagner was lifted. He settled in Biebrich where he began working on ‘Die Meistersinger von Nurnberg’, a comedy.
Turn of Fortune
On the other hand, Wagner’s wife, Minna, by now was undergoing severe depression after she found a letter her husband had written to the poet-writer Mathilde Wesendonck.
Continue Reading Below
Mathilde was the wife of Otto Wesendonck, a silk entrepreneur, and she was indulging in an extra-marital affair with Wagner. Unable to trust her husband again, Minna separated from him.
King Ludwig II was an admirer of Wagner’s work and possessed a soft corner for the composer; himself being homosexual though Wagner was not. He summoned Wagner to Munich and paid all his debts. Wagner reciprocated deep admiration in return of the tremendous support provided by the king.
In 1865, after toilsome rehearsals, ‘Tristan und Isolde’ was performed at the National Munich Theatre. The opera was titled after Wagner’s alleged daughter, Isolde, who was born to Cosima, the wife of Hans von Bulow.
Learning of this development, King Ludwig II was disappointed and had the composer removed from Munich.
Minna died around the same time in 1866, and Cosima conceived two more of Wagner’s children, a daughter named Eva and son, Siegfried. Finally, Cosima, around 24 years younger to Wagner, divorced her husband and married Wagner in 1870.
In 1876, the complete ‘Ring Cycle’ which included ‘Rheingold’, ‘Walkure’, ‘Siengfried’ and ‘Götterdämmerung’ was premiered at ‘Festspielhaus’ an opera house Wagner had built for himself at Bayreuth, and in 1882, he wrote his last drama ‘Parsifal’.
Major Works
Richard Wagner’s best known work was ‘The Ring Cycle’—a cycle of four epic music dramas—thatwas considered decades ahead of its time. He wrote the libretto and music over the course of several years, from 1848 to 1874. Such portrayal of drama hadn’t hit Western entertainment until then, as composers and directors hadn’t thought of including sequels to their operas.
Some of his other successes were, ‘Tannhauser’ and ‘Lohengrin’. He also wrote a series of essays in 1849-52.
Personal Life & Legacy
He died in 1883 on 13th February at the age of 69, from a heart attack. He was on a holiday in Venice with his wife Cosima and his children.
His body was shipped back to his home in Bayreuth where he had spent the last years of his life; he was buried in the garden of Villa Wahnfried.
The genesis of his musical dramas laid the foundation for several art forms of the 20th century. His compositions were not merely articulate scripts of literature; rather they contained intense and polemic philosophy.
Trivia
Evidence indicates that Adolf Hitler had been an ardent Wagner fan; he often listened to his compositions and even played them at the Dachau concentration camp in order to educate the captives.
Recommended Lists:
Writers #252
Musicians #70

Quotes By Richard Wagner | Quote Of The Day | Top 100 Quotes

See the events in life of Richard Wagner in Chronological Order