(Writer Known For His Satirical and Darkly Humorous Novels)

Kurt Vonnegut was one of the most influential American novelists of the 20th century who brought about a phenomenal distinction in literature. Instead of sticking to a particular genre, he diversified his work blending unthinkable categories such as science fiction with humor, social commentary with absurdity and so on. His work was filled with unusual characters that had a feel of realism in them such as the Tralfamadorians in ‘Slaughterhouse-Five’. It was due to his unique writing style that he became a literary icon and had a huge fan following. During his lifetime, he came up with various works including, ‘Cat's Cradle’, ‘Slaughterhouse-Five’ and ‘Breakfast of Champions’. His works depicted his ability to mix satire with humor, and science fiction. Other than writing, he was an established graphic artist and known for coming up with illustrated works. He was also active politically and was a lifetime member of the American Civil Liberties Union. Furthermore, he was famous for his humanist beliefs and served as the honorary president of the American Humanist Association. To know more about his life and works, read through the following lines. Cause of Death: Brain Injury

American Celebrities
Science Fiction Writers
American Men
Cornell University
University Of Chicago
Childhood & Early Life
Kurt Vonnegut was one of the three children born to Kurt Vonnegut, Sr., and Edith. He had a brother Bernard and a sister, Alice. His parents had a German American ancestry.
Academically proficient, he completed his preliminary education from Shortridge High School in Indianapolis in 1940. Thereafter, he went to Cornell University, where he majored in Chemistry.
It was while at the university that he served as the Assistant Managing Editor and Associate Editor of The Cornell Daily Sun. He also became a member of the Delta Upsilon Fraternity.
Later on, he conscripted himself in the United States Army. During his years of service, he was transferred to the Carnegie Institute of Technology and the University of Tennessee to study mechanical engineering. 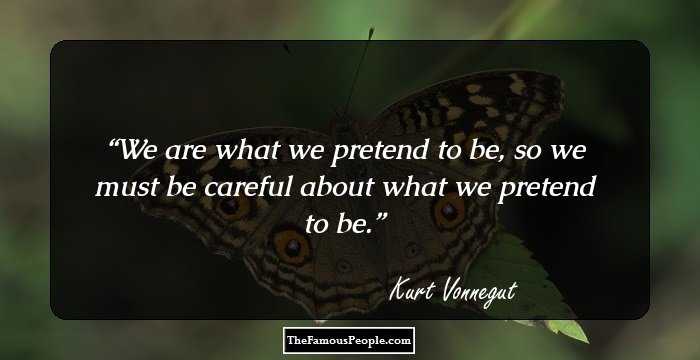 Continue Reading Below
Career
Post completing his studies, he served in Europe as a part of the 423rd Infantry Regiment and 106th Infantry Division, fighting the Battle of Bulge. While serving, he was captured and imprisoned.
He was a witness to the firebombing which took place in Dresden in February 1945, disrupting the entire city. Luckily for him, he was one amongst the few prisoners of war who survived the attack
Post war, he enrolled at the University of Chicago to study anthropology. Meanwhile, he also took up work at the City News Bureau of Chicago. However, he did not continue the same for long and left it to join as a public relations officer for General Electric.
He doubled up as a technical writer for GE and was known for giving much of himself into the work. In his free time, he volunteered as a fire-fighter in the Alplaus Volunteer Fire Department.
In addition to this, he wrote many of his short stories during this time. His first ever short story published was ‘Report on the Barnhouse Effect’ on February 11, 1950, in the edition of Collier's. the story was later reprinted in the short story collection, Welcome to the Monkey House.
Two years later, he came up with his debut novel, ‘Player Piano’. The work was one-of-its-kind as it revolved around the story wherein human workers were replaced by machine. Post its publication, he penned numerous short stories.
Meanwhile, he briefly took up work at the Sports Illustrated magazine. He was assigned to write a piece on a racehorse that had jumped off a fence and attempted to run away.
In 1959, he came up with his second novel, ‘The Sirens of Titan’. Strangely, he was on the verge of giving up on writing when he was offered the position of a teacher at the University of Iowa Writers’ Workshop.
While working as a teacher, he penned the novel, ‘Cat’s Cradle’ which went on to become a bestseller. The novel had a relatively orthodox feel to it much unlike his latter works for which he changed the writing style. It also earned him his M.A. degree in 1971 for its anthropological content
Continue Reading Below
Post the success of his latest novel, he penned yet another work titled, ‘Slaughterhouse-Five’. Autobiographical in nature, the work was highly acclaimed for its content. Unlike his previous novels, it had an experimental structure and used time travel as a plot device.
‘Slaughterhouse-Five’ went on to become one of the best American novels of the 20th century. It later appeared in the 100 best lists of Time magazine and the Modern Library.
In 1973, he came up with the novel, ‘Breakfast of Champions’ which went on to become one of his bestselling novels. It included rough illustrations and lengthy non-sequiturs. Furthermore, it had him make an appearance as a deus ex machine.
Interestingly in 1974, a novel written by Philip Jose Farmer, titled, ‘Venus on the Half Shell’ reportedly was mistaken for Vonnegut work as it was styled on the same lines as the latter’s works.
What made his novels widely read, accepted and positively reviewed was the fact that they contained realism to them despite being centred on deep imagination and cynicism. Furthermore, he explored the theme of humanism. He infused irony and simplicity to his lengthy punctuated sentences.
In 1979, he came up with the work, ‘Jailbird’ which was followed by yet another autobiographical work, ‘Palm Sunday: An Autobiographical Collage’ in 1981. The following year, he penned his next novel titled, ‘Deadeye Dick’.
In later years, he came up with his final novel, ‘Timequake’. Though the novel received mixed reviews by the readers and the critics alike, it went on to garner the bestselling status.
He then turned to writing non-fiction. In the genre, he came up with his first and last book, which was a collection of biographical essays titled, ‘A Man Without a Country’. The book contained his personal views on politics and art and gave insights about his own life.
Apart from writing, he also served as lecturer in English at the Harvard University and the City College of New York, where he was a Distinguished Professor.
Continue Reading Below 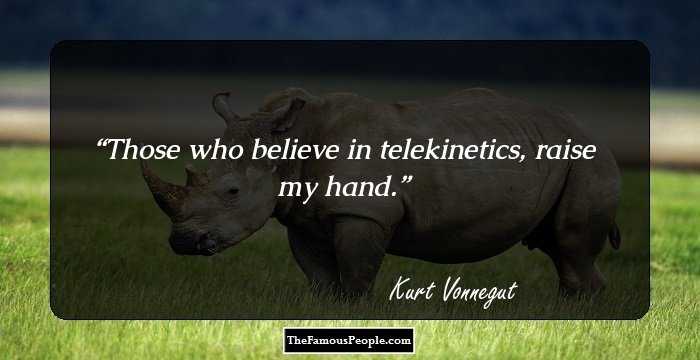 Quotes: Believe
Personal Life & Legacy
After returning from World War II, he tied the nuptial knot with his childhood sweetheart, Jane Marie Cox. The couple lived at Barnstable Massachusetts. They were blessed with three children
The relationship did not last long and the two separated in 1970. Same year, he began living in with a photographer, Jill Kremetz.
He was legally divorced from his first wife in 1979. He eventually married Kremetz.
In his life, he raised seven children - three from his first wife, three children of his sister Alice and an adopted child with Kremetz.
He breathed his last on April 11, 2007 due to head injuries which he sustained due to accidentally falling from a flight of stairs at his home in New York.
Posthumously, the April 2008 issue of Playboy contained the first excerpts from Armageddon in Retrospect, his first subsequent collection of work. Same month, the book was published and included the unpublished short stories and a letter that he had written while serving the Army during World War II. Additionally, the book contained some of his art work and a speech that he wrote shortly before his death.
An asteroid was named in his honor in 1999, titled, 25399 Vonnegut
Trivia
This acclaimed writer was considering abandoning writing altogether and taking a teaching job instead, when ‘'Cat's Cradle’ became a best-seller. 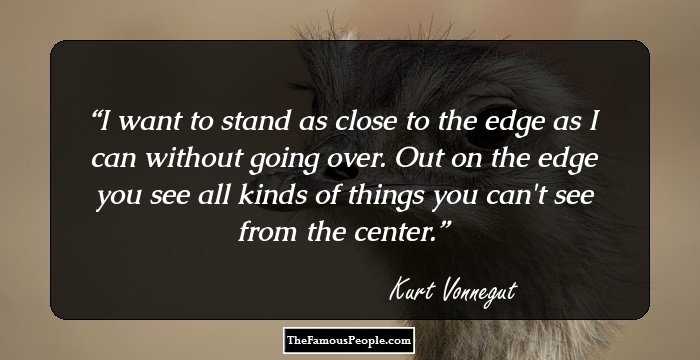 Quotes By Kurt Vonnegut | Quote Of The Day | Top 100 Quotes

See the events in life of Kurt Vonnegut in Chronological Order