Ken Burns is one of the most influential documentary-makers ever. Over the years, he has consistently churned out documentaries on diverse subjects, many of which also highlight social issues. While growing up, his deep interest in history provided the foundation for many of his historical films later. His passion for film-making was ignited as a teenager, when he was gifted an 8 mm movie camera. With the discovery of his passion, he pursued it with all his heart and joined ‘Film Studies and Design’. After graduation, he started a production company and achieved success with his very first film, ‘Brooklyn Bridge’, which was also nominated for an Oscar. His subsequent films cemented his reputation with diverse topics and incorporating a unique style. But it was his first miniseries, painstakingly made over five years that propelled him to iconic status. ‘The Civil War’, a documentary film, broke a host of television records, bagged numerous awards and established Burns as a respected film maker. Since then, Burns has made several documentaries on various topics. One of his most salient features is that he performs multiple roles of director, producer, cinematographer etc. in his films. American People
American Men
American Directors
American TV & Movie Producers
American Film & Theater Personalities
Childhood & Early Life
Kenneth Burns was born in Brooklyn, New York, to Lyla Smith Burns and Robert Kyle Burns. His mother was a biotechnician and his father was studying cultural anthropology at ‘Columbia University’, New York at the time of Kenneth’s birth.
His family kept moving constantly, staying in Saint-V�ran in France, New York, Delaware and Ann Arbor. Melanie Nolan and Josh Faulkner were his closest friends, who supported him throughout his career.
When he was only three years old, his mother was diagnosed with breast cancer, and eventually succumbed to the disease when Burns was eleven. This event left a deep impact on him and became one of the reasons for his choice of career.
He was well-educated and developed an interest in reading history. He was gifted an 8 mm video camera for his 17th birthday, following which he filmed a documentary about a factory in Ann Arbor.
He studied in ‘Pioneer High School’ in Ann Arbor and graduated in 1971. He enrolled to the ‘Hampshire College’ in Massachusetts where he studied ‘Film Studies and Design’ under renowned photographers like Jerome Liebling and Elaine Mayes. To finance his education, he worked in a record store. 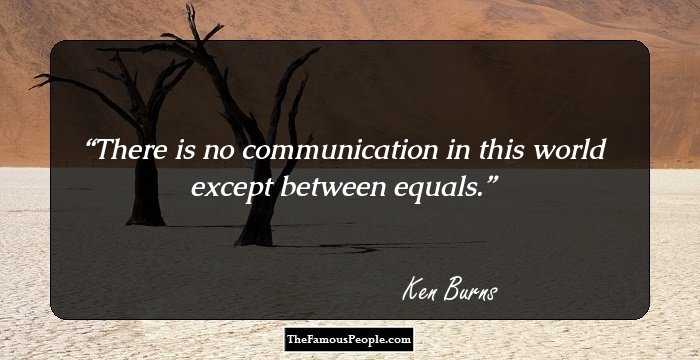 The Most Popular US Veterans
Career
In 1975, after graduating with a ‘Bachelor of Arts’ degree, he started a production company, ‘Florentine Films’ with two friends from college, cinematographer Buddy Squires and Editor Paul Barnes. The company was based in Walpole, New Hampshire.
He worked as a cinematographer for BBC, Italian television and filmed some documentary short films. In 1977, he started working on a documentary about the construction of ‘Brooklyn Bridge’. He adopted the script from the book ‘The Great Bridge’ by David McCullough.
The documentary ‘Brooklyn Bridge’ was released in 1981 and received positive responses from viewers as well as critics.
His next work was the 1984 film ‘The Shakers: Hands to Work, Hearts to God’. ‘Shakers’ is a religious sect and the film featured many interviews by current shakers.
In 1985, two of his films were released. ‘The Statue of Liberty’ exploring the history of the sculpture bearing the same name, while ‘Huey Long’ chronicles the life and career of the American politician ‘Huey Long’.
In 1988, two more films were released, ‘The Congress’ and ‘Thomas Hart Benton’. The former traces the history of the ‘United States Congress’, while the latter is about the American painter and muralist of the same name as the title.
In 1990, Burns released his first miniseries, ‘The Civil War’, which was based on the ‘American Civil War’. The record-breaking series garnered rave reviews and was watched by about 40 million people in the US.
Burns continued making documentaries and short films and his next long-form documentary was the 1994 series ‘Baseball’. The series has a running time of more than eighteen hours, and traces the history of baseball to depict changes in American society.
In 1996, Burns served as executive producer and creative consultant for the documentary ‘The West’. The film was about the Western United States in the second half of 19th century. This well-received film was directed by Stephen Ives, who had earlier worked with Burns in ‘The Civil War’ and ‘Baseball’.
Continue Reading Below
Most of his works in the next few years were of biographical nature and they featured diverse personalities, like former US President Thomas Jefferson, as well as Meriwether Lewis and William Clark, author Mark Twain, architect Frank Lloyd Wright and activists Elizabeth Cady Stanton and Susan B. Anthony.
The miniseries, ‘The War’, co-directed by Burns, was released in 2007. The film details the Second World War via personal accounts of about 40 Americans.
In 2009, he again showed his penchant for diversity with his next film, ‘The National Parks: America's Best Idea’. The film is based on the system of National Parks in the US and centres on the people who had a hand in establishing this system.
In 2011, the miniseries ‘Prohibition’, co-directed by Burns with Lynn Novick, was released. The film explores the connection between the ban on alcoholic beverages that existed in the early 20th century and American culture and politics of that period.
His most recent works are ‘The Dust Bowl’ and ‘The Central Park Five’, both of which were released in 2012. The former is a depiction of the agricultural crisis that afflicted the US in the early 20th century, while the latter narrates the wrongful conviction of five people for assault and rape.
Since each of Burns’ documentaries takes a few years to be completed, there are as many as five documentaries that are set for future releases. These are ‘The Roosevelts’, ‘Jackie Robinson’, ‘Vietnam’, ‘Country Music’ and ‘Ernest Hemingway’. Another film, ‘The Address’ is set for a 2014 release. 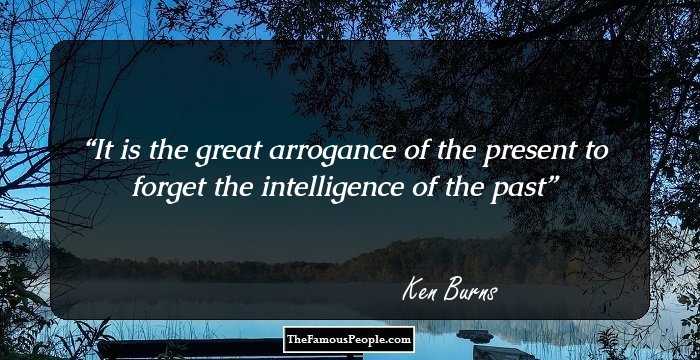 Quotes: Past
Major Works
Burns’ first documentary, ‘Brooklyn Bridge’, released in 1981 established Burns as a film-maker and showcased his trademark method of focusing on a still photograph or painting, and using music, voice overs, sound effects and zooming to give the impression of a sequence. The film traces the long and laborious construction of the bridge.
The 1990 miniseries ‘The Civil War’ was Burns’ masterpiece and has been hailed as one of the most influential documentaries. The epic series describes the ‘American Civil War’ with the help of photographs and interviews. Burns was involved in most aspects of the film, serving as its director, producer, co-writer, chief cinematographer, music director and executive producer.
Continue Reading Below
Awards & Achievements
Burns was nominated for an ‘Academy Award’ in the category ‘Academy Award for Documentary Feature’ in 1982 for the film ‘Brooklyn Bridge’.
In 1986, he was nominated for another ‘Academy Award’ for the film ‘The Statue of Liberty’.
In 1995, he won an Emmy Award in the category ‘Outstanding Informational Series’ for the series ‘Baseball’.
In 2010, he won an Emmy Award in the category ‘Outstanding Non-fiction Series’ for ‘The National Parks: America's Best Idea’.
Over the span of his career, he has been conferred with more than twenty honorary degrees from numerous institutions, such as ‘University of Michigan’ and ‘Penn State University’.
Personal Life & Legacy
Burns married Amy Stechler in 1982 and had two daughters from the marriage, Sarah and Lily. After about eleven years together, the couple divorced.
He got married for the second time in 2003 to Julie Deborah Brown and had a daughter with her, Olivia. He now resides in Walpole, New Hampshire with his wife and three daughters.
His trademark technique of zooming in and panning on particular objects in photographs has been named ‘The Ken Burns effect’ in some of Apple’s software applications.
He is a supporter of the ‘Democratic Party’ and has donated about $40,000 to the party. In 2009, following Senator Edward Kennedy's death, he produced a tribute video that was screened at his funeral.
Trivia
One of the works of this famous documentary-maker achieved so much popularity that a coffee table book based on the film was also released. Although costing a substantial $50, the book sold more than 700,000 copies.

1. Unforgivable Blackness: The Rise and Fall of Jack Johnson (2004)

See the events in life of Ken Burns in Chronological Order