There are some people who have such a profound effect on the world at large that they are immortalised in the heart and minds of generations after generations of people. In that regard, Jonas Edward Salk is certainly among that select group of people due to his contribution to medical sciences that went on to improve the lives of millions of people all across the world. He was an American medical scientist who shunned a lucrative career as a doctor and instead devoted his best years to medical research. Jonas Salk was also a virologist of the highest reputation and was responsible for inventing the vaccine for one of the most damaging medical conditions that can surface due to a virus. Salk enjoyed a long and fruitful career as a researcher, which brought him recognition from some of the leading scientific research organisations in the world. However, something that has made Salk a legendary individual in the field of scientific research is the fact that he gave away his greatest discovery for free and according to experts he could have been a millionaire many times over if he had decided to cash in on it like so many others. Read on to know more about the life of this eminent virologist.

American Celebrities
Virologists
American Men
New York University
University Of Michigan
Childhood & Early Life
Jason Salk was born to Polish immigrants Daniel Salk and Dora Salk in New York on October 28, 1914. Jason was the eldest of the three boys in the family; his youngest brother Lee Salk went on to become a child psychiatrist.
The ‘Townsend Harris High School’ in New York was renowned for being a haven for highly gifted students and in the year 1927, Jason enrolled in the prestigious institution. The tough academic demands of the school formed the basis of his career.
Like so many others who were able to graduate from ‘Townsend Harris High School’, Salk also managed to get a place at the prestigious ‘City College of New York’. In the year 1934, he was awarded his bachelor degree in chemistry.
In the year 1935 Salk enrolled in the Medicine course at ‘New York University’, where he showed remarkable academic prowess and the curiosity that is so crucial for future researchers. He received his degree four years later. At NYU he got the opportunity to work with well known researcher Thomas Francis Jr. 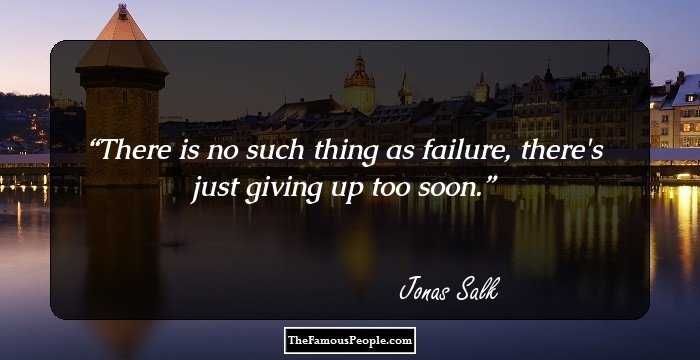 The Sexiest Men Of 2020, Ranked
Career
In the year 1942, Jonas teamed up with, his long time collaborator in medical research endeavours, Thomas Francis for a short stint at the ‘University of Michigan’. It was during this particular stint that Salk decided that he was going to be a virologist.
Although Salk did serve residency at the ‘Mount Sinai Hospital’ and continued with his research, he found it difficult to get a suitable job due to Jewish quotas at different universities. Finally he accepted an offer to become the head of virology at the ‘University of Pittsburgh’ in the year 1947.
It was in the year 1952 that years of painstaking research, on the devastating virus, bore fruit as the initial tests were conducted. It was three years later that the polio vaccine became available across the United States.
Salk continued to work in research at ‘University of Pittsburgh’ and held the position as professor in the fields of experimental medicine and bacteriology among others.
In the year, 1963, he helped in establishing the ‘Institute of Biological Studies’ at San Diego, California. It later came to be known as the ‘Salk Institute’. He continued to serve as the director of that particular institute for many years. 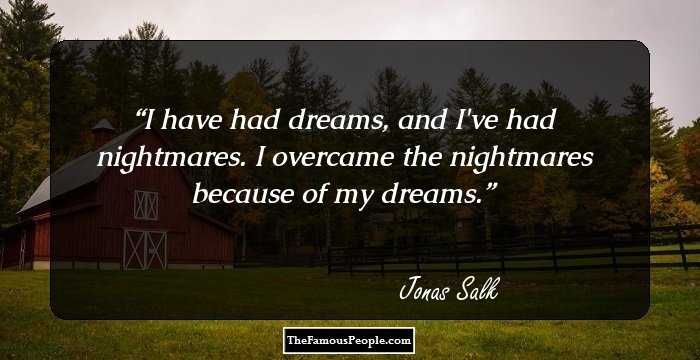 Quotes: Dreams, I
Major Works
Jonas Salk worked in plenty of highly important projects throughout his career but his most important and path breaking work was the invention of the polio vaccine that went on to save the lives of millions across the world.
Awards & Achievements
The ‘Lasker Award’ has been awarded to outstanding achievers in the field of medical science since the year the 2nd World War ended and in 1956 Jonas was given the award.
The ‘California Hall of Fame’ has inducted plenty of eminent personalities over the years and in the year 2007, Governor Arnold Schwarzenegger honoured Salk with a membership. 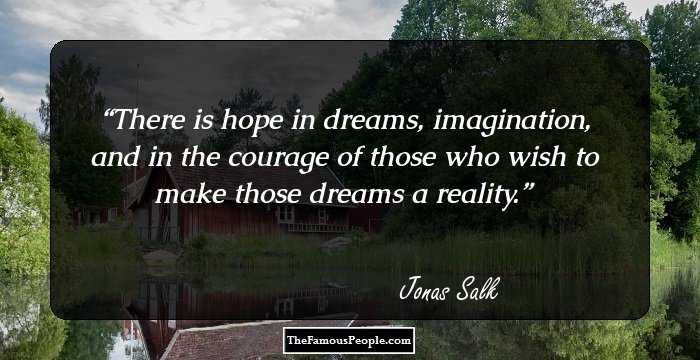 Quotes: Dreams, Hope
Personal Life & Legacy
Jonas got married to Donna Lindsay right after he became an MD in the year 1939. The couple had 3 children, all boys named Peter Salk, Darrell Salk and Jonathon Salk. They got a divorce in the 39th year of their marriage.
In the year 1970, Salk remarried and his second wife was the famous Francoise Gilot, Pablo Picasso’s one time girlfriend.
This eminent virologist died at the age of 80 of a cardiac arrest on June 23, 1995.
Salk’s biggest legacy will certainly be his work as a scientist who produced the polio vaccine that he made available throughout the world and saved millions of lives all over
You May Like

See the events in life of Jonas Salk in Chronological Order