Advanced Search
John Ruskin was an English artist and a leading art critic of the Victorian era. A multi-faceted individual, he was also a prominent social thinker and writer who wrote on varied subjects including geology, architecture, myth, ornithology, literature, education, and political economy. A nature lover, his artworks were often of plants, birds, landscapes and he emphasized on the connections between nature, art, and society in his writings. The only son of a prosperous merchant, he developed an early interest in art, primarily influenced by his father’s collection of watercolor paintings. As a young man he was influenced by the works of painters such as J.M.W. Turner, John Constable, and John Sell Cotman, and the writings of preachers like Charles Simeon, John Keble, Thomas Arnold, and John Henry Newman. He also travelled widely which inspired his artistic pursuits. He gained widespread recognition for what became the first volume of ‘Modern Painters’, a book on art criticism. The popularity of the book prompted him to add later volumes in subsequent years. In addition to art he was knowledgeable about several other subjects as well. He also published a series of social essays in the ‘Cornhill Magazine’ that he later collected as ‘Unto This Last’ and authored a series of articles on economic subjects, published in ‘Fraser's Magazine’. British People
Essayists
Non-Fiction Writers
British Men
The University of Oxford
Childhood & Early Life
John Ruskin was born on 8 February 1819 in London, England, to John James Ruskin, a prosperous businessman, and his wife, Margaret Cox, as their only child. Both his parents were highly ambitious for their son.
His father, a collector of art, instilled in the young boy an inclination towards Romanticism. His mother, a religious woman, taught young John to read the King James Bible from beginning to end. His upbringing would have a lasting impact on his future works as a painter and writer.
After receiving his primary education at home from his parents and private tutors, he attended the school in Peckham run by the progressive Evangelical, Thomas Dale from 1834 to 1835. He matriculated at the University of Oxford in 1836.
He also travelled widely as a young man. His experiences of visiting different places enriched his knowledge of the world and gave him the chance to observe nature in its varied states. From a young age he maintained notebooks in which he made drawings of maps, landscapes and buildings. 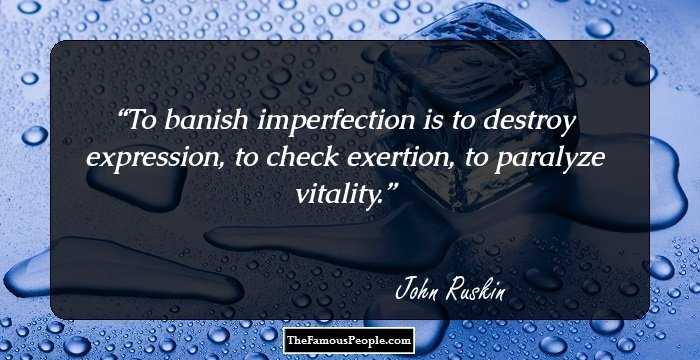 Continue Reading Below
Later Years
As a writer he was publishing short pieces in both prose and verse in magazines by the mid-1830s. He published what would become the first volume of ‘Modern Painters’ in 1843. In this work he argued about the superiority of the modern landscape painters over the so-called Old Masters of the post-Renaissance period.
The work became a popular one, and over the next 17 years he produced four more volumes. While the first book was primarily written as a defense of the later work of J.M.W. Turner, the second volume emphasized on symbolism in art, expressed through nature.
John Ruskin also had a keen interest in architecture, particularly in the Gothic revival. In 1849, he published ‘The Seven Lamps of Architecture’, detailing the seven moral categories that Ruskin considered vital to and inseparable from all architecture: sacrifice, truth, power, beauty, life, memory and obedience.
The only fairy tale he ever wrote, ‘The King of the Golden River’ was published in 1851. It became an early Victorian classic which sold out three editions. An illustrated tale, it was a story of the triumph of love, kindness, and goodness over evil.
From 1851 to 1853, he made extensive sketches and notes that ultimately became his three-volume work, ‘The Stones of Venice’. He developed this work from the technical history of Venetian architecture, from the Romanesque to the Renaissance, into a broad cultural history.
As an artist he occasionally exhibited his watercolors in the United States and in England, at the Fine Art Society and the Royal Society of Painters in Watercolour. His artistic creations were based on detailed botanical, geological and architectural observations.
He was also a renowned teacher; his popularity as a lecturer increased tremendously during the 1850s. He taught art and architecture to the students. His lectures at the Art Treasures Exhibition, Manchester in 1857, were collected as ‘The Political Economy of Art’ and later as ‘A Joy For Ever’.
Ruskin travelled widely in the 1860s, lecturing at the University of Cambridge, the British Institution, the Working Men’s Institute, and the Royal Military Academy. He was appointed the first Slade Professor of Fine Art at Oxford University in August 1869 and in 1871, he founded his own art school at Oxford, The Ruskin School of Drawing and Fine Art. 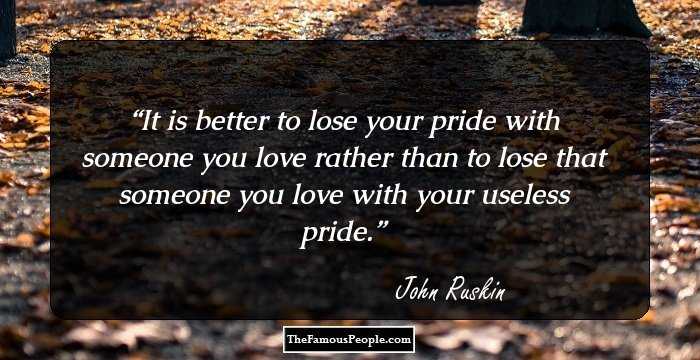 Quotes: You, Love
Major Works
From 1843 to 1860, he worked on a series of art books titled ‘Modern Painters’, in which he argued that recent painters of the contemporary era were superior in the art of landscape to the Old Masters. He produced a total of five volumes in the series.
The extended essay, ‘The Seven Lamps of Architecture’, codified to an extent, the contemporary thinking behind the Gothic Revival. The 'lamps' in the title refer to Ruskin's principles of architecture. It was a great popular success, and received the approval of the ecclesiologists typified by the Cambridge Camden Society.
Personal Life & Legacy
John Ruskin became engaged to Effie Gray, the daughter of family friends, in 1847. It was for her that Ruskin wrote ‘The King of the Golden River’. They got married the next year. This union was not a happy one and their marriage was never consummated. It was later annulled.
When Ruskin was nearly 39, he fell in love with a ten year old girl called Rose La Touche. He proposed to her when she turned 18 but she asked him to wait until she was 21. She finally rejected him, and died after a few years following a long illness. Her death contributed to Ruskin’s deteriorating mental health.
He died of influenza on 20 January 1900, at the age of 80. 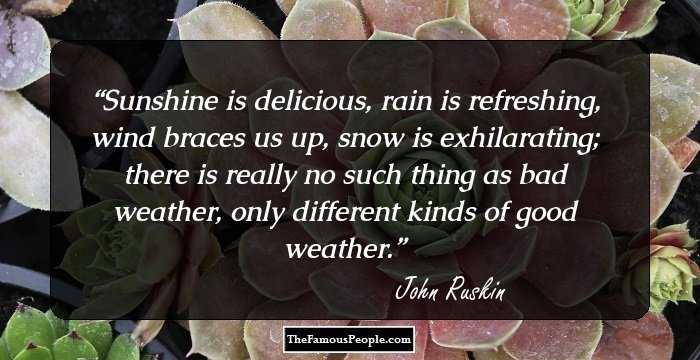 Quotes By John Ruskin | Quote Of The Day | Top 100 Quotes

See the events in life of John Ruskin in Chronological Order