John Irving is the author of the best-selling ‘The World According to Garp’ and has also penned many other award-winning books including ‘A Prayer for Owen Meany’, ‘Cider House Rules’ and ‘The Fourth Hand’. As a teenager, he took up wrestling and read ‘Great Expectations’ by Charles Dickens, which apparently had a profound impact on his life and inspired much of his future writing. An alumnus of University of New Hampshire, Irving earned fame for his impeccable plots and his unconventional choice of words. He has also dabbled with screenplay for films, many of which were adaptations of his books, for which he has won accolades and honors. He has also experimented with writing memoirs and continues to write and publish novels with unconventional, quirky themes and sexually-driven characters. From a very young age, Irving suffered from dyslexia but he never let it become a setback in his life. He never curbed his passion for reading and always had the thirst to learn more about the world around him. He doused himself in literature and nurtured his passion for sports - he accredits both for his success today. Quentin Tarantino
Novelists #237
Screenwriters #508
Writers #841
DID WE MISS SOMEONE?
CLICK HERE AND TELL US
WE'LL MAKE SURE
THEY'RE HERE A.S.A.P
Quick Facts

American People
Screenwriters
American Men
University Of Iowa
Male Writers
Childhood & Early Life
John Irving was born to Helen Frances and John Wallace Blunt, Sr. in Exeter, New Hampshire. His father was a pilot in the Army Air Force - his plane was shot down over Burma in 1943.
He was raised by his step-father and his mother and was a part of the Phillips Exeter Wrestling Program, where he was both a student and an athlete. He was later made an assistant coach for wrestling - a sport he pursued for two decades.
At the age of 15, Irving read ‘Great Expectations’ by Charles Dickens, which left an indelible impact on him. He enrolled at the University of New Hampshire and then studied at the University of Iowa, where he earned his Master of Fine Arts degree in 1967. 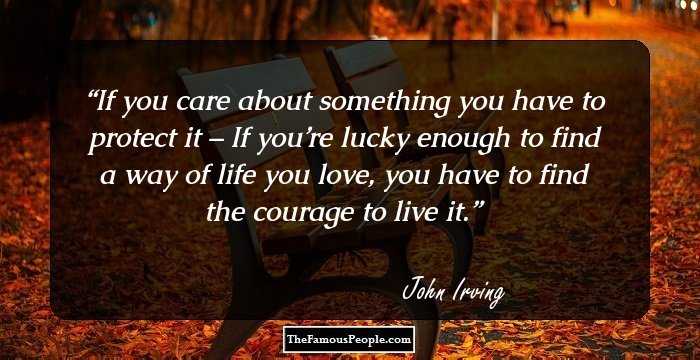 Quotes: You, Life, Love
Continue Reading Below
You May Like

The Most Popular US Veterans
Career
His first book ‘Setting Free the Bears’ was published in 1968 at a time when he was teaching at the University of Iowa. He continued to teach at the university and briefly worked at Mount Holyoke through the 1970s. At the same time, he wrote two other novels, ‘The Water-Method Man’ and ‘The 178-Pound Marriage’, both of which became extremely popular.
He shot to fame with his fourth novel, ‘The World According to Garp’, which was published in 1978. It hit the best-sellers lists for months and even won him an award in 1980.
‘The World According to Garp’ was eventually adapted into a film starring Glenn Close, Robin Williams and Mary Beth Hurt, which was nominated for the Academy Awards. All this success inspired Irving even more, which led him to author, ‘The Hotel Hampshire’, published in 1981. The same year, he penned a short-story for the first time titled, ‘Interior Space’.
In 1985, he authored one of his greatest works yet, ‘The Cider House Rules’, which is the story of an orphan who yearns to be adopted and a doctor who looks after him and his needs.
He eventually adapted the novel into a film of the same title, which was released in late 1999. The same year, he documented his time as a writer in Hollywood in the first-of-its-kind memoir, ‘My Movie Business’.
During the production of ‘Cider House’, he continued to pen novels and wrote a number of noteworthy publications including, ‘A Prayer for Owen Meany’, ‘A Son of the Circus’, ‘A Widow for One Year’ and ‘The Imaginary Girlfriend’. Once again, ‘Owen Meany’ was adopted for the big screen under the title, ‘Simon Birch’.
In the early 2000s, he continued his readers engrossed with works like ‘The Fourth Hand’, ‘Until I Find You’ and his first children’s book, ‘A Sound Like Someone Trying Not to Make a Sound’. In 2012, he authored ‘In One Person’, which is his 13th novel till date and includes details of his own personal life.
His books deal largely with literary themes which include details from his own life, his wrestling career and his sexual fantasies. Although, he has stated time and again that he likes to write with an ‘open imagination’ he uses his experiences as a young boy and adult as a launch pad for his writings. 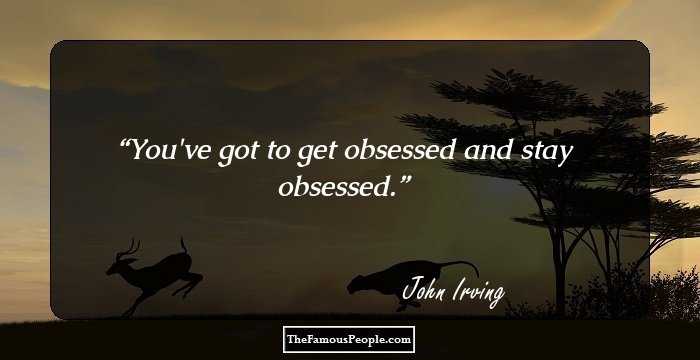 Continue Reading Below
Major Works
‘The World According to Garp’ was published in 1978 and was a finalist for a prestigious book award. The book sold over 1, 20,000 copies in the first week and was even adapted for a movie, starring Robin Williams. The book is considered his major work and openly deals with dark themes related to death, sexuality and gender visibility.
In 1985, he authored ‘The Cider House Rules’, which became a national best-seller and was even adapted into a film of the same title. The movie was nominated for the ‘Academy Award for Best Picture’.
Awards & Achievements
He won the ‘National Book Award’ in 1978 for ‘The World According to Garp’.
In 1992, he was inducted into the National Wrestling Hall of Fame.
John Irving won the ‘Academy Award for Best Adapted Screenplay’ for his script for ‘The Cider House Rules’ in 2000. 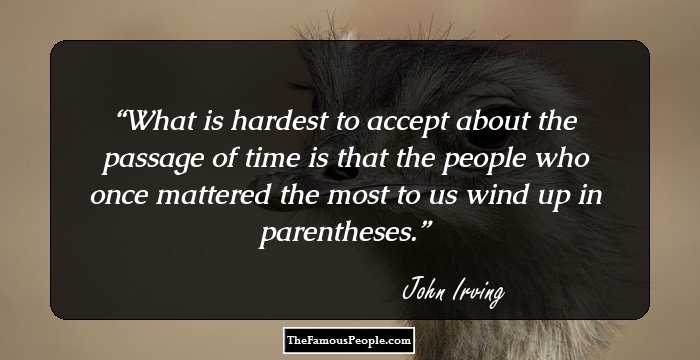 Quotes: Time
Personal Life & Legacy
In 1964, he married Shyla Leary and they had two sons - Colin and Brendan. They got divorced in the early 1980s.
He married Janet Turnbull in 1987. The couple have a have a son, Everret.
In 2007, he was diagnosed with prostate cancer, for which he had to undergo radical prostatectomy.
Trivia
The author of ‘The World According to Garp’ does not own a computer/laptop and pens down all his novels even today.
Recommended Lists:
Film & Theater Personalities #7582
You May Like

Quotes By John Irving | Quote Of The Day | Top 100 Quotes

See the events in life of John Irving in Chronological Order