Jack London is also known as John Griffith Chaney was a prolific writer of the nineteenth century. He did not have a usual childhood like most of the children but he dealt with it and overcame his grief. He could not continue higher studies because of financial problems but this did not restrain him from becoming an author. He had a vivid way of expression and was efficient in putting this in writing. He realized his flair for writing and decided to take it as a profession and began to write regularly. This helped him in gaining financial stability and enabled him to support his family, after his father’s demise. This novelist was adventurous and his voyages and journeys provided him the material of his stories. During his entire career he has penned several stories, novels, poetry, and even autobiographical literary pieces. He even worked as a journalist and covered news on man-made disasters like war and natural calamity as earthquake. These engagements helped him to know the world in a better way and also bestowed him with huge experience. These experiences later helped him in authoring short stories and novels revolving around different themes which continue to amuse the readers till today Kathy Najimy
DID WE MISS SOMEONE?
CLICK HERE AND TELL US
WE'LL MAKE SURE
THEY'RE HERE A.S.A.P
Quick Facts

American Celebrities
Alcoholics
Activists
Novelists
Journalists
Childhood & Early Life:
He was born on 12th January, 1876 at San Francisco, California, and apparently, was an illegitimate child of Flora Wellman and William Chaney. His mother married a person named John London and, probably, after that he took up the surname of his step-father. His family first moved to Bay Area and then shifted to Oakland.
He received his elementary schooling from ‘West End School’ in Alameda, California and in 1887, joined the ‘Oakland Cole Grammar School’ situated in West Oakland, California. However, he dropped out of school after completing eighth grade. 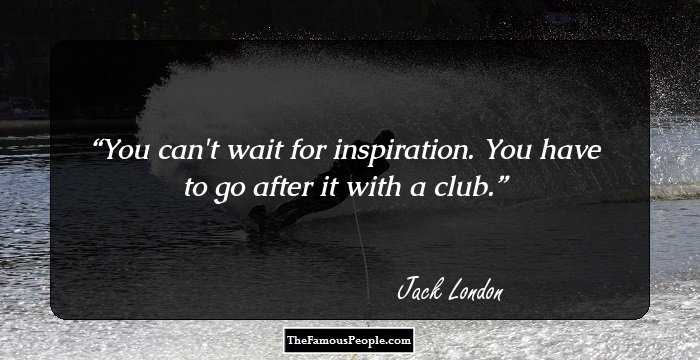 Quotes: You
Continue Reading Below
Career:
When he was around fourteen years old he got employed at a cannery and soon after, bought a sloop named ‘Razzle Dazzle’, thus beginning his adventurous voyages.
In 1892, he joined the ‘California Fish Patrol’ department of the ‘California Natural Resources Agency’ and the following year; he was sent to the coast of Japan on a seal hunting schooner called ‘Sophie Sutherland’. His story ‘Typhoon of the Coast of Japan’ is based on this journey.
In 1893, the United States was hit by a severe economic depression. The following year, he became a member of the ‘Kelly Army’ (Coxey Army) and joined the march of the unemployed people led by the Jacob Coxey. He led a life of a vagabond and was even imprisoned for this for a short span, and sent to Erie County, New York.
He had amassed a lot of experience during his life as a vagabond and all these experiences formed the basis of his book ‘The Road’.
He enrolled at the ‘Oakland High School’ and in 1896, joined the ‘University of California’, Berkeley with a desire to pursue a literary career. However financial constraints forced the aspiring writer to drop out of the institution a year later.
In 1896, he became a member of the ‘Socialist Labor Party’, and the following year, he set on a journey to Canada to the Klondike (where gold was discovered which resulted in the gold rush). Jack travelled there to mend his fortune. However, he did not get any material benefit from the place but instead gathered a lot of experience which later helped him in his career as an author.
The gold rush expedition made him a victim of the disease Scurvy and in 1898 he went back to his parents in Oakland, unaware of his step-father’s demise. Soon after he decided to take up a career of an author and support his family.
During this time, he wrote the short story ‘A Thousand Deaths’ which was printed in the magazine called ‘The Black Cat’ in the year 1899. The same year, he declined a job at the post office and concentrated on writing. This was one of his most prolific years as he wrote stories, poems, jokes and many more.
In1899, he sold his story ‘To the Man on the Trail’ to ‘The Overland Monthly’ magazine for which he was paid and thus, he started earning a living as an author.
Continue Reading Below
In 1900, he wrote the story ‘An Odyssey of the North’ which was published in the magazine ‘Atlantic Monthly’. The same year, his first book ‘The Son of the Wolf’, which was a collection of stories was also released.
Ever since the publication of his first book, he has penned numerous short stories such as ‘The Man and the Gash’, ‘Thanksgiving On Slav Creek’, ‘Housekeeping In The Klondike’, ‘The Law of Life’, ‘Moon-Face’, ‘To Build a Fire’, collection of short stories such as ‘Children of the Frost’, ‘Lost Face’, ‘South Sea Tales’, and even written plays, poetry, essays, novels and autobiographical pieces.
In 1902, he travelled to England and penned the book ‘The People of the Abyss’ and began work on another story named ‘The Call of the Wild’ which was published the following year.
He worked as a journalist during the ‘Russo-Japanese War’ for the newspaper ‘The San Francisco Examiner’ in 1904.
He reported about the San Francisco earthquake as a correspondent of the magazine named ‘Collier’s’ in the year 1906.
From 1907, he authored many other literary pieces and travelled to different places and bought properties. His voyages also probably provide materials for his stories.
His novels include ‘The Cruise of the Dazzler’, ‘The Call of the Wild’, ‘The Sea-Wolf’, ‘White Fang’ and many more.
The autobiographical pieces penned by this author are ‘The Road’, ‘The Cruise of the Snark’ and ‘John Barleycorn’. 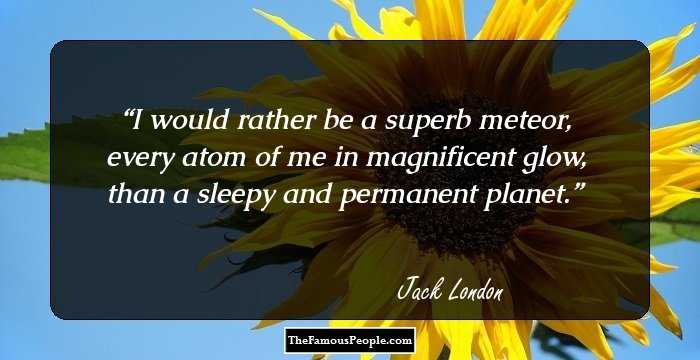 Quotes: Me, I
Continue Reading Below
Major Works
This author has written many significant stories and one amongst those is his book entitled ‘The Call of the Wild’ that tells the story of a dog named Buck and narrates all the hardships it faces in its life. It revolves around the canine’s story of how it establishes its identity as a sled dog braving the harsh cold environment.
The story shows the dog’s faithfulness towards its master and once that bond is broken, it follows its call of the wild. London thought of penning a short story but finally ended up writing a book about this dog.
Personal Life & Legacy
On 7th April 1900, he married Bessie May Maddern and the couple was blessed with two children named Joan and Bessie’. However, the couple separated four years later.
In 1905, Jack got married for the second time to Charmian Kittredge and the couple went on various voyages.
This prolific writer breathed his last on 22nd November 1916, in his ranch in California. There are many speculations about his death but the cause of his death is still not determined.
The ‘Jack London Square’ in Oakland, California has been named after him, and so is the ‘Jack London lake’ located in Yagodninsky region Magadan Oblast.
In January 1986, he was honoured by the ‘United States Postal Service’ when they released the postal stamps series called the ‘Great Americans’. 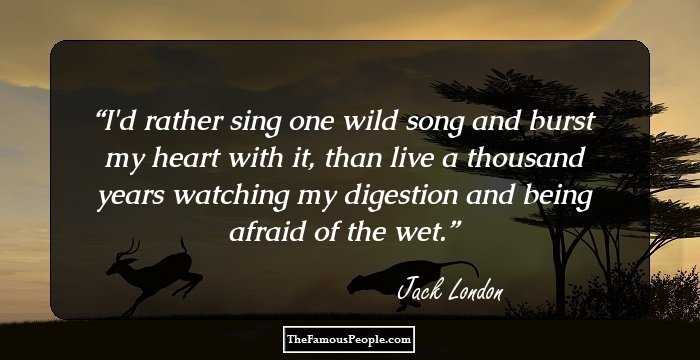 Quotes By Jack London | Quote Of The Day | Top 100 Quotes

See the events in life of Jack London in Chronological Order