Anne Rice was an American author known for horror, gothic fiction and erotic novels. Originally named Howard Allen by her bohemian mother, she adopted the name ‘Anne’ when she started attending school. The daughter of an alcoholic mother, her early life was fraught with difficulties. Growing up in poverty, she did not even have enough money to complete her college education; she found herself a job in order to pay for her night classes. She married early and became a mother, but once again tragedy struck and she lost her child to an illness. The distraught mother sought solace in writing and published her first novel, ‘Interview with the Vampire’. The book became a bestseller, giving her the much needed motivation to move on with life. Plunging into a full-fledged writing, she published two historical novels, ‘The Feast of All Saints’ and ‘Cry to Heaven’, but none of these could match the success of her debut novel. She began to write erotic novels under the pseudonym A.N. Roquelaure and published ‘The Sleeping Beauty Trilogy’. The trilogy with its explicit sexual content became a huge commercial success, even surpassing the popularity of her first novel. Many of her novels have been adapted into movies and comic books. Salman Rushdie
Novelists #143
Writers #472
Continue Reading Below
DID WE MISS SOMEONE?
CLICK HERE AND TELL US
WE'LL MAKE SURE
THEY'RE HERE A.S.A.P
Quick Facts

American Celebrities
American Women
Libra Writers
Women Writers
Women Novelists
Childhood & Early Life
Anne Rice was born in New Orleans to Howard O’Brien and Katherine Allen. She has three other sisters, one elder and two younger. Her father worked for the U.S. Postal Service and had an interest in writing. She was raised as a Roman Catholic, but later on denounced the religion.
She had a difficult childhood, marked by poverty and her mother’s alcoholism which claimed her life when Anne was just 15 years old. She went to Richardson High School and graduated in 1959.
After briefly attending Texas Woman’s University, she moved to North Texas State College. She had to take a break from college due to financial problems.
She moved to San Francisco where she found employment and began to attend night classes at the University of San Francisco. She earned her B.A. in Political Science in 1964, and M.A. in Creative Writing in 1972. 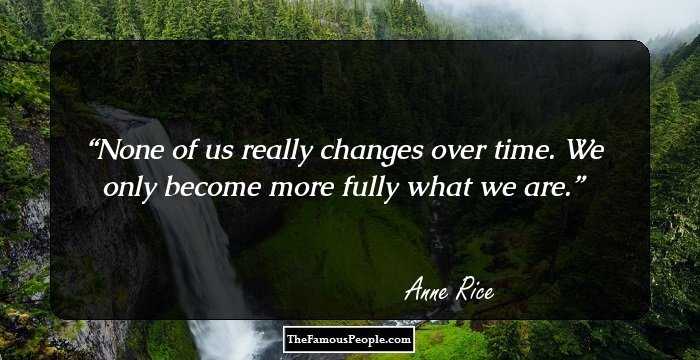 The Hottest Male Celebrities With The Best Abs
Career
Her literary career began in 1976 when her debut novel, ‘Interview with the Vampire’ was published. The novel was an expansion of a short story she had written some years ago, and it went on to become a bestseller.
She wrote a historical novel, ‘The Feast of all Saints’ in 1979, which dealt with the people of mixed race who lived before the Civil War.
She followed it with another historical novel, ‘Cry to Heaven’, in 1982.
She started writing under the pseudonym A. N. Roquelaure and published a set of three erotic novels, known as ‘The Sleeping Beauty Trilogy’, which became very popular and overshadowed the success of her debut novel.
Her return to the gothic horror genre was marked by the publication of the novel ‘The Vampire Lestat’ in 1985. The novel covered the story of an impoverished aristocrat who becomes an arrogant vampire.
In her next vampire novel, ‘The Queen of the Damned’ (1988), she gave a vivid description of the mythology of the origin of the vampires, dating back to Ancient Egypt.
In 1990, her first novel in the series ‘Lives of the Mayfair Witches’ was published. The book, titled ‘The Witching Hour’ was about a family of witches and their guiding spirit. The other two novels in the series ‘Lasher’ and ‘Taltos’ were published in 1993 and 1994 respectively.
During the 1990s, she released more vampire stories which included ‘The Tale of the Body Thief’ (1992), ‘Memnoch the Devil’ (1995), and ‘The Vampire Armand’ (1998).
In the new millennium she continued to write vampire novels, but she also began exploring a new genre—religion. After being an atheist for years, she returned to Christianity and published ‘Christ the Lord: Out of Egypt’ in 2005.
Continue Reading Below
‘Angel Time’, the first book in the ‘Songs of the Seraphim’ series was out in 2009, followed by ‘Of Love and Evil’ in the same series in 2010. 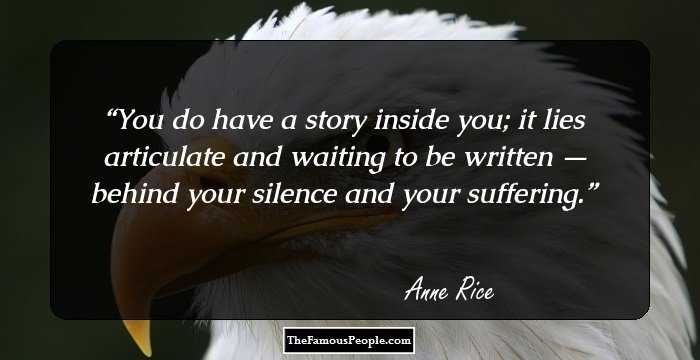 Anne Rice was most famous for her series ‘The Vampire Chronicles’ which was a set of novels based on the life of the vampire Lestat de Lioncourt. Many of the novels became bestsellers, and ‘Interview with the Vampire’ (1976) was made into a film starring Tom Cruise and Brad Pitt.

Awards & Achievements
She won the Bram Stoker Award for Lifetime Achievement in 2003. The award is given to living artists for "superior achievement in an entire career which has substantially influenced the horror genre". 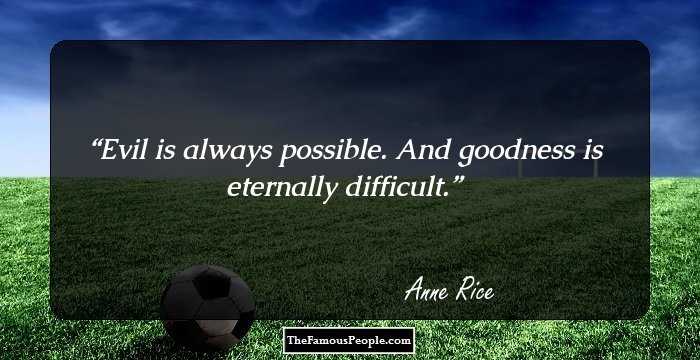 Anne Rice was married to poet Stan Rice from 1961 till his death in 2002. The couple had two children. Their daughter Michelle died of leukemia as a small child, while their son, Christopher, is a popular novelist.

She was raised in a Roman Catholic family but took to atheism as an adult. She converted back to Catholicism a few years ago only to renounce the religion again.

Anne Rice died on December 11, 2021, of complications from a heart stroke. The news of her death was announced by her son, Christopher Rice, through social media. She was 80 years old.

Trivia
During her early years she worked as a waitress and cook to make ends meet.

She was a strong supporter of the LGBT community.

See the events in life of Anne Rice in Chronological Order