DID WE MISS SOMEONE?
CLICK HERE AND TELL US
WE'LL MAKE SURE
THEY'RE HERE A.S.A.P
Popularity Index
159
Poets #36
Non-Fiction Writers #43
Writers #149
Quick Facts

epitaphs: He lies here in the dust but beholds Him, whose name is Rising

Who was John Donne?

John Donne was a famous English poet, satirist, lawyer and priest of his time. Although he is best remembered as the founder of metaphysical school of poetry, he was also one of the foremost preachers of his time in the whole of England. Born into a recusant Roman Catholic family of Welsh descent, he later moved to the Anglican Church and was appointed the Chief Secretary to the Lord Keeper of the Great Seal. However, his secret marriage to his employer’s niece not only caused him to lose his job, but it also ruined his scope for holding any other public position. Therefore, he had to live in abject poverty for about a decade. His fortunes turned when his anti-Catholic polemic ‘Pseudo-Martyr’ was published in 1610. It not only helped him to receive patronage of great noblemen like Sir Robert Drury of Hawsted, but also the favor of King James I, and after his death of King Charles I. Ultimately, he joined the Church of England at the King’s behest and within seven years, became the Dean of St. Paul’s Cathedral, London. All along he continued his literary pursuits. His works, noted for strong sensual style, continue to influence English poets even now.

Non-Fiction Writers
British Men
The University of Oxford
Male Poets
Childhood & Early Years
John Donne was born on 22 January 1573 in London. His father, also named John Donne, was a warden of the Ironmongers Company and a practicing Roman Catholic at a time, when adherence to the religion was a punishable offence.
His mother, Elizabeth Heywood, also from a recusant Roman Catholic family, was the daughter of the reputed playwright and poet John Heywood. He had several siblings including a brother named Henry and two sisters named Mary and Catherine.
In 1576, when John was not even four years old, his father died. His mother remarried Dr. John Syminges, a wealthy widower with three children, within a few months of her first husband’s death. Thus young John Donne was raised by his mother and stepfather.
Although there is no proof, it is generally believed that Donne began his education at home under a Jesuit. His maternal uncle, Jasper Heywood, was a Jesuit priest and that might have given rise to such ideas.
In 1583, as John Donne entered his eleventh year, he was admitted to Hart Hall, now Hertford College, University of Oxford. He studied there for three years and then shifted to the University of Cambridge, where he studied for three more years.
However, at that time, to receive their degrees, graduates were required to take the Oath of Supremacy. As a Roman Catholic, he refused take any such oath and so he did not get his degrees. Thereafter in 1591, he entered Thavie's Inn to be trained as a barrister.
Later on 6 May 1592, he was admitted to Lincoln's Inn, one of the Inns of Court in London, the professional associations for barristers in England and Wales. By that time, he had inherited considerable fortune and so instead of practicing, he spent his wealth on women, literature and travel. 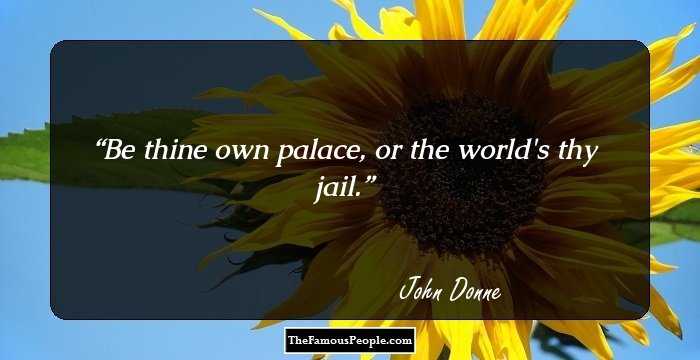 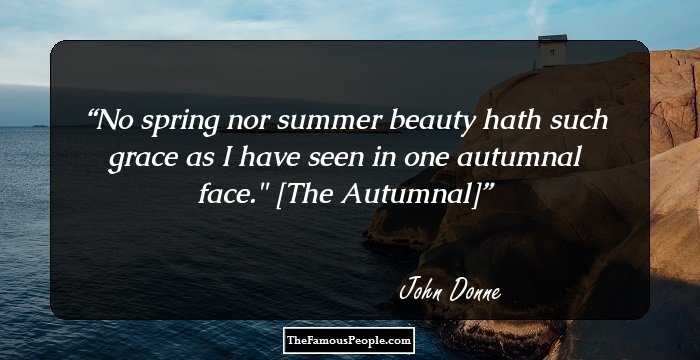 Aquarius Writers
British Non-Fiction Writers
Aquarius Men
Major Works
’Devotions upon Emergent Occasions’, which John Donne wrote in 1623 from his sickbed, is said to be his most important work. The book has been divided into 23 parts, each of which covers what he thought and reflected upon on a single day.
‘Elegy XIX: To His Mistress Going to Bed’, full of erotic imagery, is a major example of Donne’s metaphysical poems. Through this poem, he reinvented Petrarchan poetic conventions of wooing from afar and at the same time, used Ovid's sexually aggressive language and style, thus creating an early specimen of libertine poetry.
Personal Life & Legacy
John and Anne Donne spent a major part of their married life in abject poverty. Yet, they were very close to each other. When Anne died on 15 August 1617, Donne vowed never to marry again and brought up his children single handedly.
In their sixteen years of married life, Anne bore him twelve children, two of whom were stillbirths. Their ten surviving children were Constance, John, George, Francis, Lucy, Bridget, Mary, Nicholas, Margaret, and Elizabeth.
Towards the end of his life, John Donne was afflicted with what is believed to be stomach cancer and died on 31 March 1631. He was later buried in Old St. Paul’s Cathedral. The John Donne Memorial, a bust statue sculpted from bronze by Nigel Boonham, was commissioned in the churchyard of the Cathedral in 2012.
Moreover, he has been commemorated as a priest in the calendar of the Church of England and in the Calendar of Saints of the Evangelical Lutheran Church in America. 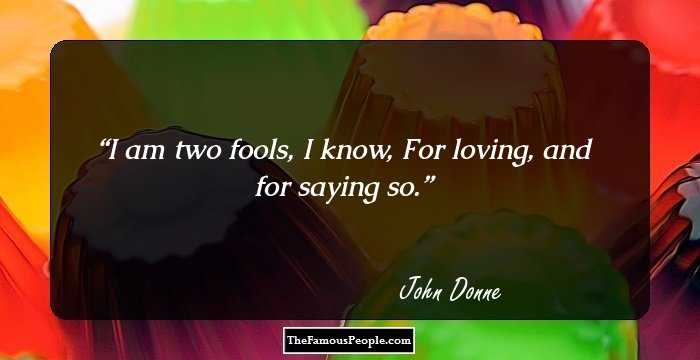 Quotes: I
Trivia
As John Donne was arrested shortly after his wedding in 1601, he wrote a letter to his wife from the prison, conveying the news. In it he wrote, ‘John Donne, Anne Donne, Un-Done.’
Recommended Lists:
You May Like

See the events in life of John Donne in Chronological Order