(Lead Vocalist of the Rock Band 'The Doors')

Advanced Search
Jim Morrison was an American singer-songwriter, best known as an exponent of rock music, one of the most popular genres of music. Jim is known both as a lead singer for his band ‘The Doors’ and for his personal singles and albums. Despite the advent of many popular musicians, Morrison will always be remembered for his path breaking rock music. Jim Morrison, along with his band ‘The Doors,’ became the most popular and high profile band of America. While he is mainly known for his skills as a songwriter, he also wrote several books. Morrison also wrote poems which were brought out as an album (An American Prayer) by his band after his death. Though Morrison was much loved for his music, he was also much hated for his addictions and drug abuse. Morrison lived a controversial life, with wine, women, and drugs always by his side. Despite his controversial personal life, he is greatly admired for his greatest hits like ‘Light My Fire,’ ‘Love Me Two Times,’ ‘Love Her Madly,’ and ‘Touch Me.’ epitaphs: Truth to your own spirit

American Celebrities
Vocalists
Musicians
Rock Singers
Lyricists & Songwriters
Jim Morrison Childhood
Jim Morrison was born James Douglas Morrison on 8 December 1943, in Melbourne, Brevard County, Florida, United States, to George Stephen Morrison and Clara Morrison. Jim was the eldest of three kids. His sister Anne Robin was born in 1947 and his brother Andrew Lee Morrison was born in 1948. In 1947, Morrison met with a car accident at the age of four and witnessed an American Indian family being injured and killed. Morrison was deeply hurt by this incident and later narrated it in the song ‘Dawn's Highway’ from the album ‘An American Prayer.’ References of the road accident also came in the songs ‘Peace Frog’ and ‘Ghost Song,’ sung by Morrison in his later years. The incident not only left a deep impact on the singer but also changed his formative days. Morrison would go on to talk about this incident in many of his future songs, poems, and interviews. 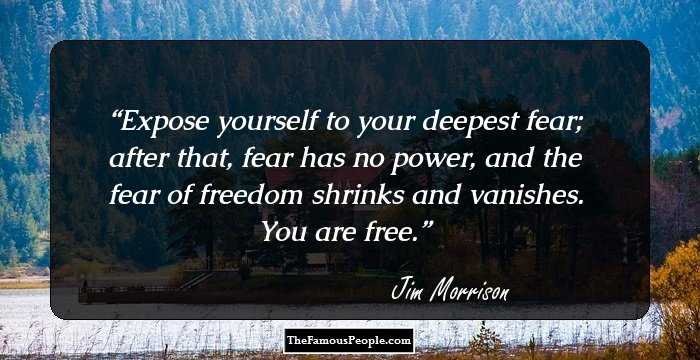 Quotes: You, Yourself, Fear, Power
Continue Reading Below
Education
Morrison’s father worked in the ‘United States Navy’ due to which Morrison had to travel most of the time and shift from one home to another. Much of his childhood was spent in San Diego, California. In 1957, Morrison went to ‘Alameda High School’ in Alameda, California. In June 1961, he completed his graduation from ‘George Washington High School’ (presently George Washington Middle School) in Alexandria, Virginia. Morrison started living with his paternal grandparents in Clearwater, Florida, where he attended classes at ‘St. Petersburg Junior College.’ In 1962, he shifted to ‘Florida State University’ (FSU) in Tallahassee where he appeared in a school recruitment film. During his stay in FSU, Morrison got entangled in a football game prank which got him arrested. In January 1964, Morrison arrived in Los Angeles, California, to attend the ‘University of California, Los Angeles’ (UCLA). Morrison took up Comparative Literature program within the UCLA English Department and attended Jack Hirschman's class on Antonin Artaud. Morrison was greatly influenced by Artaud's brand of surrealist theatre and much of his later growth in dark poetic sensibility of cinematic nature is attributed to Artaud. In 1965, Morrison received his undergraduate degree at UCLA's film school and the Theatre Arts department of the College of Fine Arts. While pursuing his film studies in UCLA, Morrison made two films – ‘First Love,’ which Morrison made along with his roommate Max Schwartz, and ‘Obscura’ which was a documentary. Morrison lived in Venice Beach in Los Angeles during this time and befriended few writer friends who worked at the ‘Los Angeles Free Press.’ 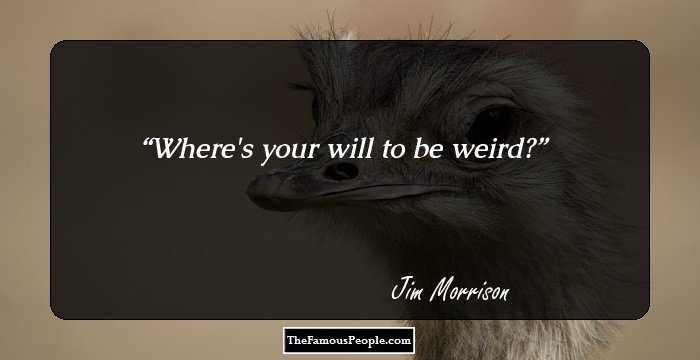 Quotes: Will
Music and formation of The Doors
After graduating from UCLA in 1965, Morrison started leading an unconventional life at Venice Beach. Jim and his fellow UCLA mate Ray Manzarek initially formed the band ‘The Doors’ which was soon joined by drummer John Densmore and guitarist Robby Krieger. The band got their name from the title of Aldous Huxley's book, ‘The Doors of Perception’ (a reference to the "unlocking" of "doors of perception" through psychedelic drugs). ‘The Doors’ was formally formed as a rock band in 1965.
Jim Morrison was known for being the lead member of the band, writing most of the songs. Guitarist Robby Krieger also made several lyrical contributions, writing and co-writing many of the band’s hit songs, such as ‘Light My Fire,’ ‘Love Me Two Times,’ ‘Love Her Madly,’ and ‘Touch Me.’ In 1966, ‘The Doors’ performed the opening act of Van Morrison's band ‘Them’s’ in the ‘Whisky a Go Go’ event. Jim was greatly inspired and influenced by Van Morrison’s stage performance and public acts. ‘The Doors’ and Van Morrison along with his band jammed together on the last night of the event.
Growth of The Doors
Soon ‘The Doors’ started gaining popularity as a powerful rock band. The band earned national recognition after signing with ‘Elektra Records’ in 1967. ‘The Doors’ reached the top spot with their hit single ‘Light My Fire’ which peaked at number one on the ‘US Billboard Hot 100.’
‘The Doors’ appeared on the popular TV show ‘The Ed Sullivan Show’ which had introduced ‘The Beatles’ and Elvis Presley to global audiences. In 1967, Morrison and his band produced a promotional film for the song ‘Break on Through (To the Other Side),’ which was the first single release of their first album. All the band members appeared in the video. The video had several close-up shots of the band members and Morrison lip-synched the lyrics. ‘The Doors’ made many other music videos which include ‘The Unknown Soldier,’ ‘Moonlight Drive,’ and ‘People Are Strange.’
With time, ‘The Doors’ became a hugely popular rock band in the United States. After releasing their second album ‘Strange Days,’ Morrison and his band were recognized as a band which belted a fine mix of blues and rock tinged with psychedelia. Morrison introduced his band’s psychedelic form of music through their version of ‘Alabama Song’ from Bertolt Brecht and Kurt Weill's operetta, ‘Rise and Fall of the City of Mahagonny.’ In 1967, Jim Morrison’s black and white photos were taken in a photo session organized by photographer Joel Brodsky. The photo session was named ‘The Young Lion.’ Even today, several photographs taken during this shoot are used on magazines, covers, compilations, and various memorabilia items of ‘The Doors.’ The photo shoot is arguably the best and upholds Morrison’s iconic status. In 1968, ‘The Doors’ released their third studio album ‘Waiting for the Sun’ and their fourth album ‘The Soft Parade’ in 1969. 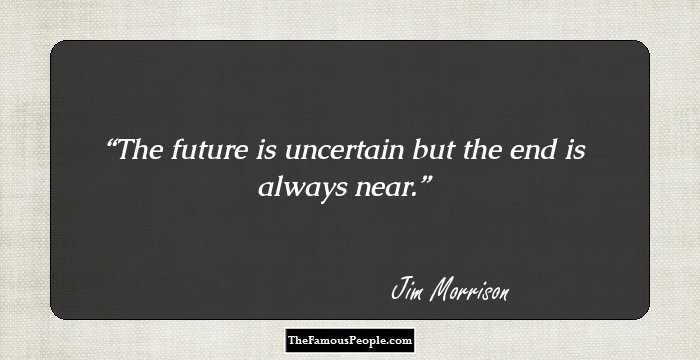 Quotes: Future
Decline of Morrison
Morrison started taking drugs regularly in the late-1960s. Besides this, he reportedly started coming to studio recordings drunk. Morrison also arrived late at live shows and performances. This resulted in the band playing instrumental music and later forcing Manzarek to perform vocals. In 1969, Jim was reportedly seen sporting a beard and turning out in casual dresses. He was also seen wearing slacks, jeans, and T-shirts instead of his earlier stylish leather pants and concho belts.
In 1969, while in a stage performance at the concert taking place in ‘Dinner Key Auditorium,’ Miami, Jim allegedly vexed the audience and tried to spark off a riot among the crowd. Jim was arrested and a warrant was issued by the Dade County Police department after three days of the performance. Charges of ‘indecent exposure’ were labelled on Morrison. From then on, all of ‘The Doors’ concerts were called off.
Writing Career
Jim was a great poet much before he had turned into a successful song writer/lyricist. He published two volumes of his poetry in 1969, ‘The Lords / Notes on Vision’ and ‘The New Creatures.’ In 1970, Jim privately published his book ‘An American Prayer.’ Many of Jim’s writings were later made into several books and compilations.
Films and Documentaries on Morrison
*‘The Doors Are Open’ (1968) *‘Live in Europe’ (1968) *‘Live at the Hollywood Bowl’ (1968) *‘Feast of Friends’ (1970) *‘The Doors: A Tribute to Jim Morrison’ (1981) *‘The Doors: Dance on Fire’ (1985) *‘The Soft Parade, a Retrospective’ (1991) *‘The Doors’ (1991) - A fictional film directed by Oliver Stone. It starred Val Kilmer as Morrison and had cameos by Krieger and Densmore. *‘The Doors: No One Here Gets Out Alive’ (2001) *‘Final 24: Jim Morrison’ (2007) *‘When You're Strange’ (2009)
Personal Life
Jim Morrison lived most of his early life with his long-time partner Pamela Susan Courson. He had even transferred most of his estates and properties to Courson’s name, but both died at a very young age. Courson encouraged Morrison to write poetry and develop depth in it. Morrison was also known to have lived and spent time with various other women. In 1970, Morrison took part in a Celtic Pagan handfasting ceremony with rock critic and science fiction/fantasy author Patricia Kennealy and the couple was known to have signed a document claiming to be wedded. Morrison allegedly had sex with his fans, fellow celebrities, and several other women throughout his flashy musical career. In 1993, he was inducted into the ‘Rock and Roll Hall of Fame’ as a member of ‘The Doors.’
Death
Jim died on 3 July 1971. According to an official record, Jim was found in a Paris apartment bathtub by Courson. There was no autopsy carried out on the body as the medical examiner had allegedly found no foul play in his death. The cause of Morrison’s death could not be determined. Two decades later, two witnesses claimed that Morrison had taken drugs after drinking for an entire day and that he had coughed blood before going unconscious. Courson also died at the age of 27 due to drug overdose.
Recommended Lists:
Singers #82
Lyricists & Songwriters #46

Quotes By Jim Morrison | Quote Of The Day | Top 100 Quotes

See the events in life of Jim Morrison in Chronological Order