Lenny Kravitz is a Grammy Award-winning rock musician who is known for his albums, ‘Are You Gonna Go My Way’ and ‘Let Love Rule, Mama Said’. He was raised in a wealthy household and introduced to rock music from a very young age. His early musical career was anything but glamorous, but he went on to make a mark in the music industry with his distinct abilities to dabble with a number of instruments such as the guitar, bass and drums. He is also known for his choice of elaborate sets for his music videos and his theatrical stage antics during the performances. His songs are impregnated with a bit of all popular genres of music including jazz, retro, soul, R&B, psychedelic and rock. He is the proud recipient of numerous awards and has even broken the record for getting the most consecutive wins in a single category by a male performer. Once known for his dreadlocks, this popular singing sensation was a teenage icon, whose acting abilities were at par with his singing talent. He has appeared in a number of films including ‘Precious’ and ‘The Hunger Games: Catching Fire’. American People
Lyricists & Songwriters
American Men
New Yorkers Musicians
Male Singers
Childhood & Early Life
Lenny Kravitz was born in New York City into a Russian-Jewish family. A child prodigy, he began playing the drum at the age of 3 and by the age of 5, he knew he wanted to become a musician.
Although he was born to a devout Christian mother, Kravitz was never really the religious type and concentrated more on spiritualism. However, at the age of 13, he became a non-denominational Christian.
During his school years, he listened to a wide genre of music including R&B, Jazz, Classical and the Blues, which influenced his taste for music as he grew old.
In 1974, the family relocated to Los Angeles, where his mother was offered the role of Helen Willis in the sitcom, ‘The Jeffersons’. He joined the California Boys Choir, with whom he performed for three years. He also sang with the Metropolitan Opera and was a member of ‘Mahler’s Third Symphony’.
It was in Los Angeles, where he was first introduced to rock and heavy metal bands. His love for all the genres of music earned him a spot in a highly reputed music program at Beverly Hills High School in 1978. He taught himself to play the bass and the piano and befriended ‘Zoro’, who was his best friend and music collaborator. 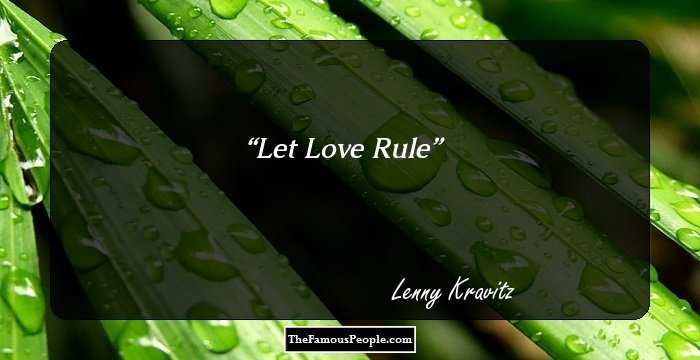 Quotes: Love
Continue Reading Below
Career
In 1985, he met recording engineer, Henry Hirsch, who helped him record a demo ‘Romeo Blue’ in the New Jersey recording studio. He began working on his debut album with Hirsch for more than a year and then went on a tour with Karl Denson, a saxophonist for the next five years.
Kravitz signed a record deal with Virgin Records and released his debut album, ‘Let Love Rule’ on September 6, 1989. The album incorporated both the funk and rock, which were the ‘in’ genres at the time.
The following year, he produced the song, ‘Justify my Love’ by Madonna which was also written by Kravitz in collaboration with Ingrid Chevez. In 1991, he came up with a self-titled album for the French actress and singer, Vanessa Paradis. The same year, he also released his second album, ‘Mama Said’, and dedicated all its songs to his ex-wife.
He wrote ‘Line Up’ for Steven Tyler of ‘Aerosmith’ and was also cast in Mick Jagger’s album, ‘Wandering Spirit’, in 1993. The same year, he also collaborated with Al Green and Curtis Mayfield for a number of projects.
Towards the end of 1993, he released his next album, ‘Are You Gonna Go My Way’ and received appreciation from fans and music critics. The next year, he recorded a funk-rock version of a song by ‘KISS’ called ‘Deuce’.
In 1995, he released his album, ‘Circus’, which went on to become a blockbuster, peaking at the Billboard charts. Two of its singles, ‘Rock and Roll is Dead’ and ‘Can’t Get You Off My Mind’ became extremely popular.
In 1998, he released ‘5’, which was created using the latest digital technology. The album contained a number of hit singles which catapulted Kravitz to great stardom in the music industry.
One of his greatest albums ‘Lenny’ was released in 2001 and three years later he released ‘Baptism’. Around this time, he also appeared in an episode of the Simpsons titled, ‘How I Spent My Summer Vacation’.
He began collaborating with Madonna during her live performances and was even a part of her ‘Confessions Tour’ in 2006. The following year, he performed for ‘Live Earth’ in Rio de Janeiro.
Continue Reading Below
In 2008, he recorded his latest album, ‘It Is Time for a Love Revolution’, which was a moderate success. In order to promote his album, he embarked on a 9 city mini-tour.
Due to a brief illness, he had to postpone the dates of his tours and decided to take a break from his singing career. He landed his first acting role with the movie, ‘Precious’, which was showcased at the Sundance Film Festival in 2009.
From 2010 to 2012, he got back to his career in music and released his next album ‘Black and White America’, an album he was working on since 1997. It was during this time, he was cast in ‘The Hunger Games’ as a stylist, Cinna. The movie was eventually released on March 23, 2012. 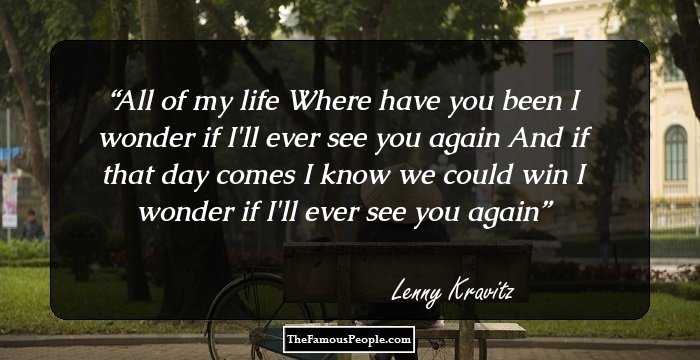 Quotes: You
Major Works
His album, ‘Let Love Rule’, received a gold certification and peaked at the number 61 position in the United States. It became even more popular in Europe and received widespread success.
‘Greatest Hits’, which released in 2000, became his most successful album and sold over 10 million copies in the world and earned him a Grammy Award.
Awards & Achievements
In 1994, he won a BRIT Award in the category, ‘Best International Male Artist’.
He won four consecutive Grammy Awards for ‘Best Male Rock Vocal Performance’ from 1999 to 2002.
He was honored with the highest cultural award in France, the ‘Ordre des Arts et des Lettres’.
Personal Life & Legacy
On November 16, 1987, he married Lisa Bonet in Las Vegas. Their daughter Zoe Kravitz was born the following year.
He was linked with model Adriana Lima and the couple was engaged to be married, but they called it off within a year.
Throughout his career, he has suffered from severe bouts of bronchitis for which he had to cancel a number of shows and tours.
Trivia
This popular American songwriter and musician was named after his uncle, who was killed during the Korean War on March 7, 1951.

See the events in life of Lenny Kravitz in Chronological Order