(Founder and Frontman of The Rock Band "Bon Jovi")

John Francis Bongiovi, Jr., famously known as Jon Bon Jovi, is one of the world’s best-selling music artists and the lead singer of the band ‘Bon Jovi’. He is also known for his solo albums and acting career in Hollywood. Jovi was born in New Jersey in a middle class family and knew since a very young age that he is going to be a rock star one day. He was not interested in studies and instead devoted his time in playing music and singing with local bands and recording demos at his cousin’s recording studio. Soon he was noticed by New Jersey radio station and he, along with his band mates, signed his first deal and became an international craze soon after. Along with his musical career, he has always worked hard for his acting stints in movies and television. Jovi’s film career has been interesting as he started with small-time cameos and ultimately got lead roles in movies like ‘The Leading Man’ and ‘Moonlight and Valentino’. He also ventured out in the world of business with his record label ‘Jambco Records’, management company ‘Bon Jovi Management’ and professional arena football team ‘Philadelphia Soul’. He is socially active and is the founder of the charitable foundation ‘The Jon Bon Jovi Soul Foundation’; reason why he was appointed by President Obama to the White House Council for Community Services. American People
Rock Singers
Lyricists & Songwriters
American Men
New Jersey Musicians
Childhood & Early Life
Jon Bon Jovi was born in Perth Amboy, New Jersey to Carol and John Francis Bongiovi, Sr. His father was a hairdresser and his mother was a former Playboy Bunny who later became a florist. He has two brothers.
He attended St. Joseph High School, New Jersey. He used to take little interest in studies and spent most of his adolescence dreaming about becoming a big rock star. He started playing at The Power Station, a recording studio owned by his cousin Tony.
He soon started playing and singing at the clubs and collaborated with the keyboardist David Bryan and bands like: ‘The Rest’ and ‘The Lechers and John Bongiovi and the Wild Ones’. After leaving school, he worked as a Janitor for some time. 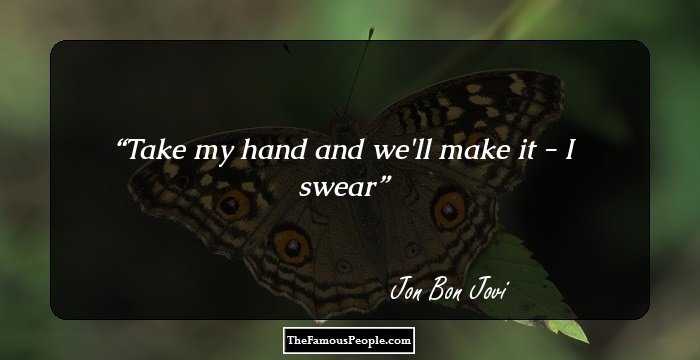 Quotes: I
Continue Reading Below
Career
While sweeping the floors at The Power Station, Jovi got the opportunity to record his demos with famous musicians. One of his demos ‘Runaway’ caught New Jersey radio station’s attention and he was signed on by Mercury/Polygram in 1983.
Jovi collaborated with a bunch of musicians and the band was named ‘Bon Jovi’. Along with him, the band included David Bryan on the keyboard, Alec John Such as bassist and Tico Torres as the drummer. Their first album ‘Bon Jovi’ was released in 1984.
In 1985, ‘Bon Jovi’s’ second album titled ‘7800 Fahrenheit’ was released. The album was a huge success and was certified gold. But Jovi still thought that they were still not getting the kind of fame they deserved.
Around the same time, Jovi’s cousin Tony, the owner of The Power House, sued the band, claiming that he had been responsible for the band’s success. The case was settled out of court in 1986.
In 1986, their third album ‘Slippery When Wet’ was released and professional songwriter Desmond Child was hired to work on the lyrics of the album. The band became an international phenomenon and sold 9 million copies in the US alone.
Owing to his success, in 1987, Jon went to work on Cher’s self-titled album. He co-wrote the songs with her and gave the backing vocals on ‘We All Sleep Alone’. He also produced many of the tracks from the album.
In 1988, he made his first appearance in the movie ‘The Return of Bruno’, a move that initiated his career in the movies alongside his singing career. Around that time, he also co-produced Cher’s another album titled ‘Heart of Stone’.
His fourth album ‘New Jersey’ was also released in 1988. The album topped the American Billboard charts and the band decided to go on 18-month world tour, in order to promote their newly released album.
The ‘New Jersey’ tour ended in 1990 and the whole band was physically and mentally exhausted, which affected their initial strong bonding. In the same year, Jovi recorded a soundtrack for the movie ‘Blaze of Glory’.
Continue Reading Below
In 1991, Jovi founded his record label, ‘Jambco Records’ and produced Aldo Nova’s and Billy Falcon’s albums. In the same year, he fired band’s longtime manager and created ‘Bon Jovi Management’ instead.
The band resolved it differences and came together with the album ‘Keep the Faith’ in 1992. The album did not do as well commercially as their previous albums.
In 1994, Jovi released his greatest hits album called ‘Cross Road’. The album, along with old hits, also included new singles like ‘Always’ and ‘These Days’. The album was a hit, especially in Europe and the UK.
In 1995, Jovi played a significant role in the movie ‘Moonlight and Valentino’ in which he starred along with actors like Gwyneth Paltrow and Kathleen Turner. In the next year, he played the lead role in ‘The Leading Man’.
Jovi released his first solo album ‘Destination Anywhere’ in 1997. The album was a huge success. A short movie on the album was also released, starring Jovi, Demi Moore, etc. For the next couple of years, he did movies like ‘Row Your Boat’, ‘Homegrown’, etc.
In 2000, after 5 years, ‘Bon Jovi’ reunited and released their 7th album ‘Crush’. The hit single from the album ‘It’s My Life’ became an instant craze and earned a Grammy. The album also won a Grammy in the category of Best Rock Album.
Around the same time, Jovi continued to work in the movies and gave out memorable performances in the movies: ‘Pay It Forward’ starring Kevin Spacey and Helen Hunt and ‘U-571’ starring Matthew McConaughey and Harvey Keitel.
He became more famous as an actor and established his acting credentials with US’s popular comedy series ‘Ally Mc Beal’ in 2002. The series ran for only nine episodes but it made Jovi very famous in the world of acting.
From 2002–2009, ‘Bon Jovi’ released albums like ‘Bounce’, ‘Have A Nice Day’, ‘Lost Highway’ and ‘The Circle’. These albums became commercial sensations. Jovi did TV series ‘The West Wing’ and ‘When We Were Beautiful’, a documentary on ‘Bon Jovi’ was released.
Continue Reading Below
In 2009, band’s album ‘Circle’ was released, which was a commercial success. In the same year, Jovi featured on the single ‘Everybody Hurts’, which included 21 artists. It was released to support the Haiti Earthquake victims. He also appeared in ’30 Rock’.
In 2010, Jovi was appointed by President Obama to the White House Council for Community Services. He provides advice to the president on the community issues t.
In 2011, he appeared in the movie ‘New Year’s Eve’, in the role of a successful rock star. Around the same time, his charitable foundation ‘Jon Bon Jovi Soul Foundation’ helped low income people to build affordable homes.
In 2013, ‘Bon Jovi’s’ 12th studio album ‘What About Now’ was released and it is currently being promoted on the tour, ‘Because We Can: The Tour’. The album has already been certified gold in the UK and has sold almost 1 million copies worldwide. 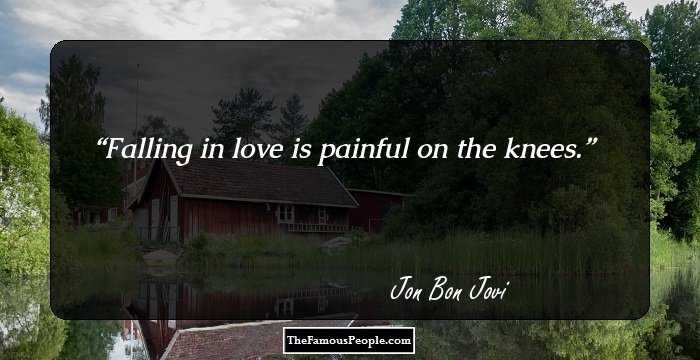 Quotes: Love
Personal Life & Legacy
Jovi got married to his high school sweetheart, Dorothea Hurley, in 1989, at the Graceland Wedding Chapel. The couple has four children together: Stephanie Rose, Jesse James Louis, Jacob Hurley and Romeo Jon.
Trivia
Jovi is a founder and owner of the ‘Philadelphia Soul’, a professional arena football team.
He got married to his wife on a secret trip to Las Vegas.
When Jovi got a haircut for his album ‘Keep the Faith’, it made headlines on CNN. 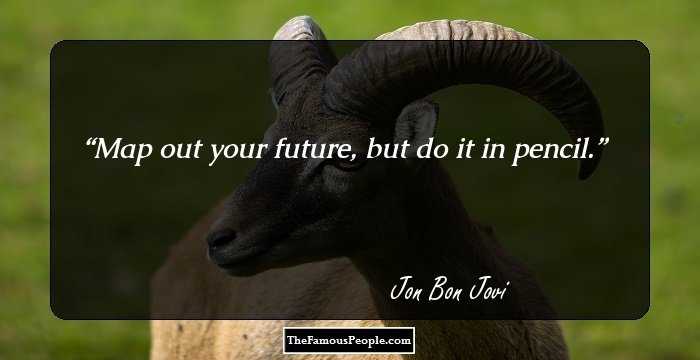