James Arlington Wright was a Pulitzer Prize winning American poet born in late 1920s in the industrial town of Martins Ferry, located in the valley of Ohio River, into a working class family. His family was never well off, but with the onset of the Great Depression, the situation became even worse. Yet, growing up in the midst of such desolate condition, witnessing poverty and human suffering all around him, did not deter him from appreciating the beauty of nature or even god literature. Inspired by Lord Byron, he wrote his first poem at the age of eleven. In later years, he often drew on the images he had witnessed as a child and his work talked as much about sorrow as about salvation and self-revelation. He was a prolific writer, having published ten collections of poems in his lifetime only. In addition to such original work, he had also translated the works of foreign writers like Trakl, César Vallejo, Hermann Hesse, and Pablo Neruda, being influenced by them in return. Art Garfunkel
Poets #989
Writers #4909
Continue Reading Below
DID WE MISS SOMEONE?
CLICK HERE AND TELL US
WE'LL MAKE SURE
THEY'RE HERE A.S.A.P
Quick Facts

American Celebrities
American Men
Kenyon College
University Of Washington
Male Poets
Childhood & Early years
James Arlington Wright was born December 13, 1927, in Martins Ferry, Ohio. Both his parents were school dropouts. His father, Dudley Write, worked as a die-cutter at Hazel-Atlas Glass while his mother, Jessie Wright, was employed at the White Swan Laundry, both located in the neighboring town of Wheeling, Virginia.
Apart from two brothers, Ted and Jack, James had an adopted sister named Marge. Although his parents could not study due to poverty they gave their children good education. Later Ted became a well-known reporter and photographer while Jack mastered in astronomy and became a prominent mathematician, physicist, and astronomer.
Martin Ferry, being an industrial town, was crisscrossed with miles and miles of railroads. It also held numerous factories that belched out smoke all day long and it swirled over the town, carried by the strong wind blowing in from the Ohio River.
The people here were poor, the roads were dirty and the houses mostly in dilapidated condition. With the onset of the Great Depression in 1929, the situation became even worse. To earn additional money, his father and uncles joined in to dig a WPA swimming pool in a city park.
In contrast to such poverty and sorrow, the area was gifted with natural beauty. Apart from the deceptively powerful Ohio River, which dominated the lower valley, the jagged hills, punctuated by ravines, offered a new dimension to the beauty of the place.
In later years, his poetries would show how such contrasting environment had impacted his young mind. Indeed from childhood, he was an extraordinary boy. At eleven, while the other boys dreamed of becoming a clerk and earning a decent living, he started learning Latin from a friend.
In 1938, his friend, who must have come from a different background, gave him the collected works of Lord Byron. He was so influenced by it that he immediately began to write poetries.
In 1942, James entered Martins Ferry High School. Here, he was particularly influenced by Helen McNeely Sheriff, who taught Latin and Elizabeth Willerton Esterly, the English teacher. They quickly recognized his potentials and encouraged his talent in languages.
Among the two, he was fonder of Miss Sheriff and whenever he wrote anything, he always wondered if she would approve of it. It was mainly from her that he learned, “… that the use of the mind is not a mere luxury, but rather is itself an exercise of strength…”
However, life was not easy for young James. Much later in an interview to Gib Rurak and Dave Smith, he had said that he used to get up at four o’clock in the morning and then he “shoveled out the cow manure out of the barn and bailed out the horse urine”. 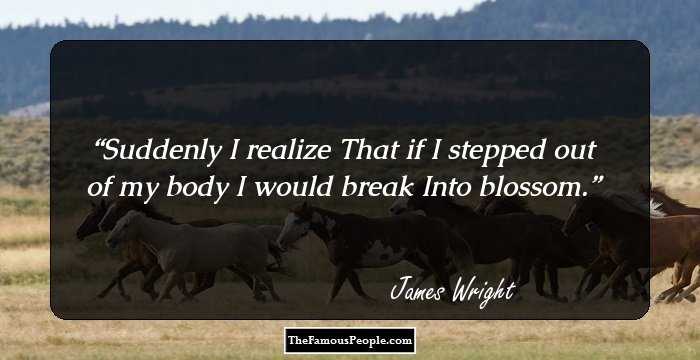 The Sexiest Men Of 2020, Ranked
In Pursuit of Higher Education
In 1946, James Wright graduated from Martins Ferry High School with Valediction. In the same year, he enlisted in the U.S. Army, where he served for 18 months. Out of these eighteen, he spent 12 months as part of the Occupation Forces in Japan.
Towards the end of this period, he met another soldier from Ohio, who intended to join Kenyon College in Gambier, Ohio. On returning home, he too decided to follow him and taking advantage of the generous educational provision of the GI Bill, he applied for a seat.
Thereafter in January 1948, he entered Kenyon and was shocked to find that every semester the college dismissed at least half of the fresher. Wright was not one of them; but like most others, he soon realized that he was not as smart as he had thought.
At Kenyon, he studied English with great teachers like James Crowe Ransom, Charles Coffin, and Philip Timberlake. In addition, he enthusiastically took part in extracurricular activities, publishing more than twenty poems in the college’s literally journal, ‘The Kenyon Review’.
In addition, he regularly contributed to HIKA, the oldest literally magazine of the college and won the school’s Robert Frost Poetry Prize just before graduating magna cum laude in 1952. Sometime during his junior years, he was also elected to Phi Beta Kappa.
After graduating in June 1952, he worked for few months. While some biographers are of the opinion that he was employed at the railroad in Philadelphia others believe he was a teacher at Tenney School in Texas.
Anyhow, sometime during this period he received Fulbright Scholarship and with it he left for the University of Vienna with his newly-wedded wife. Here he studied German literature in the 1952-1953 academic session and in course of that he discovered the poetry of Georg Trakl and Theodore Storm.
They returned to the USA in 1953. In the same year, he received a teaching scholarship and joined the University of Washington at Seattle for his masters. Here he studied with well-known teachers like Stanley Kunitz and Theodore Roethke, receiving his MA degree in 1957. 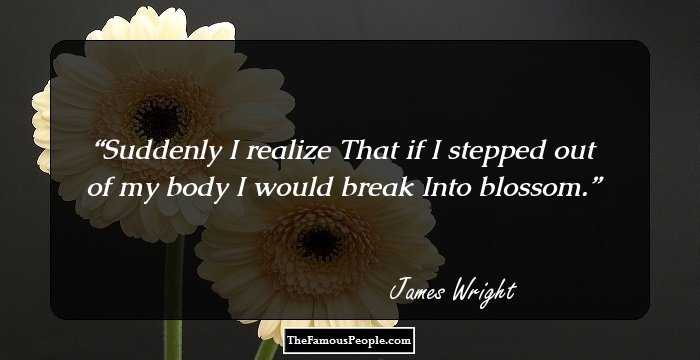 Quotes: I
Continue Reading Below
A Teacher & A Poet
In 1957, soon after receiving his MA degree, James Wight started working on his doctoral thesis. Later in the same year, he joined the faculty of University of Minnesota, thus beginning a long career in teaching. It was also the year, which launched him as a poet.
Wright had all along continued writing poems; in 1954, his manuscript was selected by W. H. Auden for publication in the Yale Younger Poets Series. The book, entitled, ‘The Green Wall’ was published in 1957. In the same year, it was awarded the prestigious Yale Younger Poets Prize.
Concurrently, he continued working on his doctoral thesis, writing his dissertation on Charles Dickens. In around 1958, he began translating and publishing the works of German and South American poets in collaboration with Robert Bly and John Knoepfle.
In 1959, Wright received his PhD degree from the University of Washington. In the same year, he had his second book, ‘Saint Judas’ published. In 1960, it earned him the Ohioana Book Award. Thus his reputation as a poet began to spread.
Concurrently, Wright continued to contribute poems to important journals like New Yorker and New Orleans Poetry Review. Moreover, he also had reviews published in major publications like the Sewannee Review.
He had later said that he did not feel any conflict between his duties as a teacher and his aspiration as a poet. May be, the University of Minnesota thought otherwise and did not offer him tenured professorship. Therefore in 1963, he left the University to join nearby Macalester College.
In the same year, Wight had his third book, ‘The Branch Will Not Break’, published. His earlier two works were formalist in nature. This work, for the first time, signals a departure from his old style and from now on he would slowly move towards experimental free verse.
In 1966, he moved to New York City, where he lived for the rest of his life. Here, he joined the faculty of Hunter College, one of the constituent organizations of the City University of New York.
Concurrently, he continued with his literally pursuit, publishing his next significant work, ‘Shall We Gather at the River’ in 1967. In the following years, he went on a tour of Europe, visiting France, Italy, Australia and Yugoslavia. It rejuvenated him to a great extent.
Continue Reading Below
Thereafter in 1971, he published ‘Collected Poems’. It was followed by ‘Two Citizens’ in 1973, ‘Moments of the Italian Summer’ in 1976 and ‘To a Blossoming Pear Tree’ in 1977.
Wright’s last collection of poems, ‘The Journey’ was largely completed by 1980. Since he passed away before he could publish it, it was published posthumously in 1982.
'The Delicacy and Strength of Lace' is another of his posthumously published books. In 1975, Wright met author Leslie Marmon Silko at a writers’ conference in Michigan. Three years later as Silko’s book was published, Wright congratulated her through a letter.
For the next 18 months, the two writers continued exchanging mails. Initially the letters were formal; but gradually they began to share their life. In 1985, his wife Ann edited those letters and published them in a book form. Critics have hailed the book as an epitome of brotherly love.
Major Works
Among his published work, James Wright is best remembered for his 1971 publication, ‘Collected Poems’. If one considers the book from the point of view of literally style it would seem that one is reading the history of contemporary American poetry.
Other than that, ‘The Branch Shall Not Break’ is another of his well-known works. The book, along with works of Sylvia Plath and Galway Kinnell, gave a new direction to the contemporary American poetry. The poems in this collection are heartwarming; yet direct and simple. 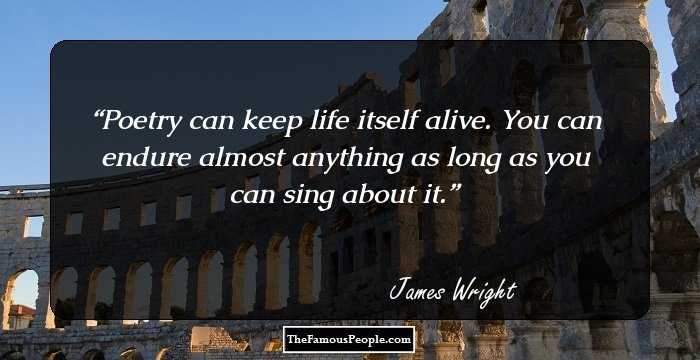 Quotes: You, Life
Awards & Achievements
In 1965, James Wright received Guggenheim Fellowship for Creative Arts, US & Canada.
In 1972, he was awarded the Pulitzer Prize for his book, ‘Collected Poems’.
Personal Life & Legacy
In 1953, James Wright married Liberty Kerdules, his classmate at Marin Ferry High School. They had two sons, Franz and Marshall. In around 1958, the relation between the two became strained. It led to their separation in 1959 and divorce in 1962.
In 1967, when Wright was 40, he married Edith Anne Crunk, a sculptor. She was the source of inspiration for many of his later poems and appeared as "Annie" in many of them. They did not have any children.
In 1979, he developed a severe sore throat. It was later diagnosed as an aggressive type of cancer. He was initially hospitalized at New York’s Mount Sinai; but later was transferred to Calvary Hospital for terminal cancer patients. He died there on March 25, 1980, at the age of 52.
In 1981, James Wright Poetry Festival was established in Martins Ferry; but it had to be stopped in 2007, not because of lack of interest, but because of lack of man power.
Trivia
James Wright’s son, Franz, later grew up to be an eminent poet and receiver Pulitzer Prize. Till now, they are only parent/child pair to have won the Prize in the same category.
You May Like

Quotes By James Wright | Quote Of The Day | Top 100 Quotes

See the events in life of James Wright in Chronological Order