J. Robert Oppenheimer is fondly remembered as the founding father of the American School of Theoretical Physics. His significant contributions in the field of science include the ‘’Born-Oppenheimer approximation’, the invention of nuclear weapons and his studies on electrons and positrons. From his childhood days, he was a highly talented boy and completed schooling in a very short span of time. Despite this, he entered Harvard a year late, at the age of eighteen, owing to ill-health from colitis. As a man of perseverance, Oppenheimer was keen on making up for his lost years by taking six courses in each term at college, thus utilizing his time to the maximum. He was a member of the Phi Beta Kappa fraternity, where he was inspired by Percy Bridgman’s teachings on thermodynamics which proved to be a turning point in his career. He was the first physicist to point out the existence of black holes but unfortunately, he did not have the patience to validate his theory. Luis Alvarez, a Nobel Prize physicist had mentioned that Oppenheimer would have won a Nobel Prize for his work on black holes and neutrons, had he survived and if he had the patience to substantiate his theory with an experiment. A three-time nominee of the Nobel Prize, he supported Leftist Communities in the political arena and was also fond of the Sanskrit language.
Continue Reading Below American Celebrities
American Men
Harvard College
University Of Göttingen
Male Scientists
Childhood & Early Life
Julius Robert Oppenheimer was born to Julius Oppenheimer, a rich textile importer and Ella Friedman, a painter by profession. His parents were German-Jews who had immigrated to America in 1888.
He studied at Alcuin Preparatory School initially and in 1911, he enrolled at the Ethical Culture Society School. It was here he completed his schooling in a short span of time and took a great deal of interest in the subject of ‘mineralogy’.
In 1922, he entered Harvard College to learn chemistry but later, studied literature, history, mathematics and theoretical and experimental physics as well. He graduated from the university in 1925.
He joined Christ’s College, Cambridge University and worked at the Cavendish Laboratory and was soon offered work by the famous British physicist, J.J Thomson, who agreed to take him on the condition that he completed a fundamental laboratory course.
In 1926, he joined the University of Gottingen, where he studied under, Max Born. At the time, the university was one of the premier institutions in the field of theoretical physics and it was here, he befriended a number of individuals who went to become famous including Enrico Fermi and Wolfgang Pauli.
During his time at the university, he published over a dozen papers on physics and also made novel contributions in the field of quantum mechanics.
His thesis paper based on the ‘Born-Oppenheimer Approximation’ became a notable dissertation in the study of molecules. He finally graduated with a Doctor of Philosophy degree, in 1927. 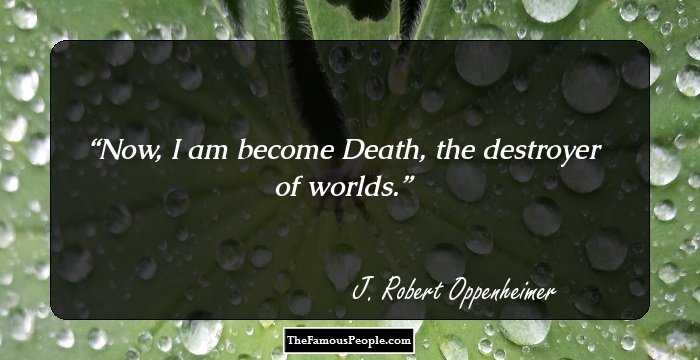 Quotes: Death, I
Continue Reading Below
You May Like

The Hottest Male Celebrities With The Best Abs
Career
In 1927, he was awarded a fellowship for research at the Harvard University and at the California Institute of Technology by the United States National Research Council.
In 1928, he gave lectures at the University of Leiden and then travelled to Zurich to work with his friend, Wolfgang Pauli, on quantum mechanics and the continuous spectrum.
He accepted the associate professorship at the University of California, Berkeley in 1929 and served this position for the next twenty years.
Apart from being a physicist, he started taking an active part in politics in the year 1934. He began donating a part of his salary to help German physicists escape from Nazi Germany and also began supporting social reforms, which were branded as ‘communist efforts’ later on.
In 1935, he worked with Melba Philips, a physicist and came up with the ‘Oppenheimer-Phillips process’, which is still in use even today.
In 1936, he was appointed as a full-time professor at the Lawrence Berkeley National Laboratory and was asked to limit his professorship at Caltech University. However, an agreement was finalized wherein Oppenheimer would be released for six weeks, which is equivalent to one semester, to be able to teach at Caltech.
In 1939, he produced the paper, ‘On Continued Gravitational Attraction’, which predicted the existence of black holes. However, the paper lacked sufficient elucidation.
In 1942, he was involved in the ‘Manhattan Project’ with a group which was involved in developing the first atomic bombs during World War II.
He became the unanimously elected chairman of the General Advisory Committee of the Atomic Energy Commission, in 1947. As the chairman, he petitioned enthusiastically for global arms regulation and for the backing of basic science projects.
Continue Reading Below
Simultaneously, he served as the Director for the Institute for Advanced Study in Princeton, New Jersey from 1947. The same year, he and a number of physicists, worked on quantum electrodynamics of elementary particles and also developed the concept of ‘renormalization’.
Since pre-World War II, J. Edgar Hoover and the FBI were keeping a close watch on Oppenheimer, because they believed he was closely affiliated with Communist groups.
In 1949, he affirmed in front of the House Un-American Activities Committee, that he did work in close quarters with the Communist Party in 1930s, which put him in controversy for the next four years.
Towards the end of his life, he collaborated with Betrand Russell, Albert Einstein and Joseph Rotblat and formed the World Academy of Art and Science, in 1960. 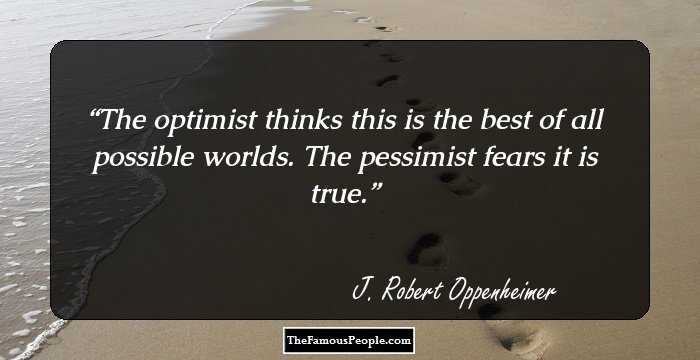 Major Works
At the University of Gottingen, he published a thesis paper on the ‘Born-Oppenheimer Approximation’, which became a notable paper in the study of quantum chemistry and expounds the wavefunction of molecules. This is considered one of his important early works.
His paper on the ‘Oppenheimer-Philips process’ opened a new dimension in nuclear fusion, which is still valid in the world of science today.
He made notable contributions to nuclear physics, spectroscopy, astrophysics, and quantum field theory. He was the first physicist to point out the existence of black holes.
He had made notable contributions to the theory of cosmic ray showers that led to the description of quantum tunneling.
Continue Reading Below
Awards & Achievements
At the age of twelve, he became an honorary member of the New York Mineralogical Club for his presentation on mineralogy.
He was awarded the ‘Medal of Merit’ for his services as the director of Los Alamos, in 1946.
In recognition to his services during political crisis, he was awarded the Enrico Fermi Award, in 1963. 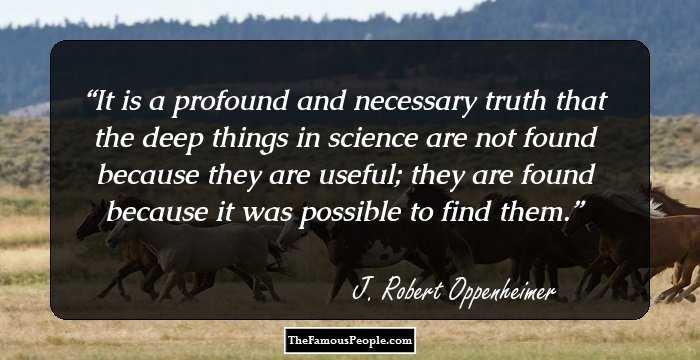 Personal Life & Legacy
At Berkeley, he had an affair with Jean Tatlock, a student from Stanford University School of Medicine and the daughter of a literature professor at Berkeley, in 1936.
He met Katherine Puening Harrison, a biologist at Berkeley who had been married thrice earlier. Oppenheimer married her on November 1, 1940 and the couple had two children named Peter and Katherine.
He was diagnosed with throat cancer and despite a successful chemotherapy; he fell into a coma and passed away.
In his honor, an asteroid ‘67085 Oppenheimer’ and a lunar crater, ‘Oppenheimer’, was named after him.
Trivia
The theoretical physicist friend, Francis Ferguson, recalled that this great physicist had once left an apple doused with noxious chemicals at the desk of his tutor Patrick Blackett.
This famous theoretical physicist often had intense psychological problems and was a chain smoker who used to miss his meals when he was engrossed in deep thoughts.
You May Like

See the events in life of J. Robert Oppenheimer in Chronological Order