Jonathan Kimble “J. K” Simmons is an actor best known for his character roles. He is considered one of the most talented and prolific character actors of his generation, with over 200 film and TV roles to his credit. The son of a music teacher, he possessed a natural love for music. He was also keenly interested in drama and sports. As a young man, he graduated from the University of Montana with a degree in music. He began his career as a member of the Seattle Repertory Theater. In the ensuing years, he established himself as a respected figure in the drama world and appeared in many Broadway productions. Following a successful career on the stage, he moved on to TV where he was able to recreate the same kind of success. Soon after, he made his movie debut as well. He gained much fame for playing versatile character roles, ranging from a caring father to a sadistic neo-Nazi individual. During his career, he won numerous awards, including an Academy Award and a British Academy Film Award. He is also a voice actor and has lent his voice to several characters in animated shows and video games Jonathan Kimble Simmons was born on January 9, 1955, in Grosse Pointe, Michigan, US. His mother, Patricia (née Kimble), was an administrator, while his father, Donald William Simmons, was a music teacher at Parcells Middle School. Jonathan has two siblings.

He attended Ferry Elementary School in Grosse Pointe Woods. His family moved to Worthington, Ohio, a suburb of Columbus when he was ten years old. He attended Worthington High School from 1970 to 1972. There, he participated in drama, football, and choir.

In 1973, his father was made the director of the School of Music at the University of Montana. Jonathan joined the same university and graduated with a Bachelor of Arts degree in music in 1978.

He joined the music-oriented fraternity Phi Mu Alpha Sinfonia as a college student. 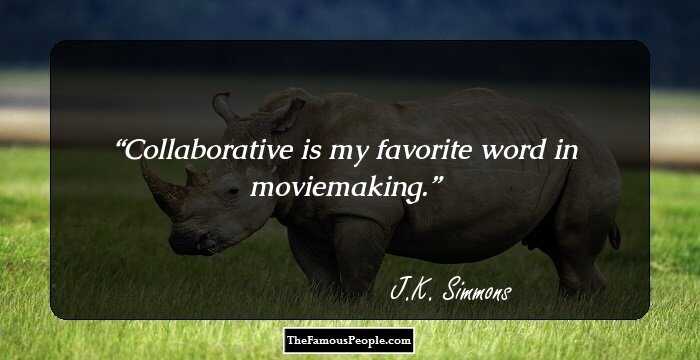 J. K. Simmons moved to Seattle and joined the Seattle Repertory Theater. It was here that he met his future best friend, Michael Smith. He bagged a small role in the TV film Popeye Doyle in 1986 and played a minor role in the TV soap opera All My Children the following year.

He starred in the Off-Broadway musical Birds of Paradise in 1987. In 1992, he played the leading role of Benny Southstreet in a Broadway revival of Guys and Dolls.

The late 1990s were highly productive for J. K. Simmons. In 1998, he acted in two films, Celebrity and Above Freezing.

In 1999, he had substantial roles in four movies: Hit and Runway, The Cider House Rules, For Love of the Game, and I Lost My M in Vegas.

The year 2009 was an especially prolific one for J. K. Simmons. He portrayed many versatile roles in multiple films, including The Vicious Kind as Donald Sinclaire, New in Town as Stu Kopenhafer, Red Sands as Lieutenant Colonel Arson, I Love You, Man as Oswald Klaven, and Post Grad as Roy Davies.

He played Assistant Police Chief Will Pope in 109 episodes of the TV police procedural series The Closer from 2005–12. The series was a big hit and earned multiple awards and nominations.

In 2014, he appeared in the independent psychological drama film Whiplash. He played the abusive instructor Terence Fletcher, who is ruthlessly cruel to his student jazz drummer Andrew Neiman. J. K. Simmons won the Academy Award for Best Supporting Actor for his performance.

From 2017 to 2019, he starred in the thriller TV series Counterpart as Howard Silk. During this same period, he also appeared in numerous films, including The Black Ghiandola (2017) as Ralph Aceto, A Boy Called Sailboat (2018) as Ernest, and 3 Days with Dad (2019) as Joey.

In 2020, he played Roy Schlieffen in the science fiction romantic comedy Palm Springs. In 2021, he appeared as James Forester in the military science fiction action film The Tomorrow War, William Frawley in the biographical drama film Being the Ricardos, and Coach James Lazor in National Champions.

In 2022, he voiced the character Captain Putty in the live-action animated film Chip 'n Dale: Rescue Rangers. He will be seen in the films Batgirl and Glorious in the near future. 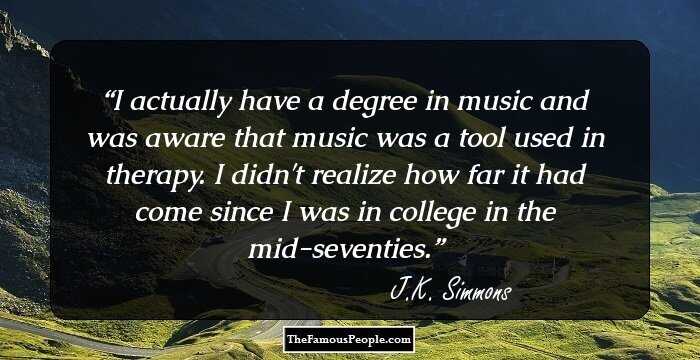 J. K. Simmons is best known for playing music instructor Terence Fletcher in the independent psychological drama film Whiplash in 2014. The film explores concepts of dedication, success, and perfectionism. He won the Academy Award for Best Supporting Actor for this role.

In the biographical film Being the Ricardos (2021), he played the role of veteran actor William Frawley. The film explores the relationship between Lucille Ball and Desi Arnaz. It was a major hit, and Simmons received a nomination for the Academy Award for Best Supporting Actor for this role.

J. K. Simmons is married to actress and director Michelle Schumacher. The couple tied the knot in 1996 and have two children: Olivia Simmons and Joe Simmons.

Both his children showed an interest in acting and were encouraged by their parents. His daughter has appeared in two films and his son takes up roles in low-budget films.

He is an avid fan of the Detroit Tigers and played the Tigers' manager in the sports film For Love of the Game (1999). 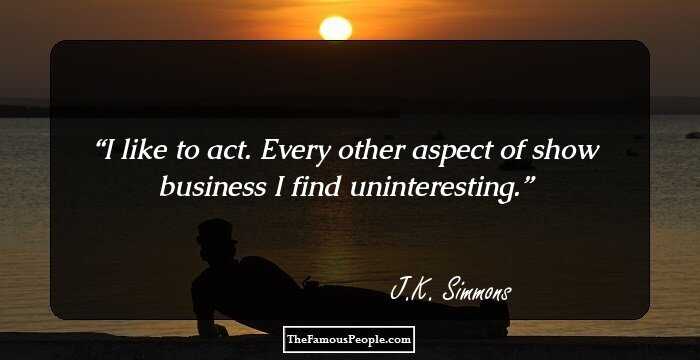 See the events in life of J. K. Simmons in Chronological Order