Immanuel Velikovsky was a Russian-Jewish psychiatrist, known largely for his controversial books on ancient history, particularly the Worlds in Collision’, published in 1950, which became a US best-seller, despite being objected by various academicians and scientists. After completing his medical course, he started editing and translating scientific papers into Hebrew at ‘Scripta Universitatis’ journal, a project which played a major role in establishing the Hebrew University of Jerusalem. However, he was more inclined towards the study of ancient history, including the global catastrophes of a celestial origin and reconstruction of ancient Middle Eastern history. After researching for over 10 years, he succeeded in completing two manuscripts – ‘Ages of Chaos’ and ‘Worlds in Collision’, which were highly criticized and banned from being published due to lack of physical evidence of his theories. Despite the increased controversy, he continued to author more books as an answer to his critics’ opposition and their questions. These included: ‘Earth in Upheaval’, ‘Oedipus and Akhnaton’, ‘Peoples of the Sea’, and ‘Ramses II and His Times’. His works were, however, recognized and appreciated in due course of time, following which he started delivering lectures at esteemed universities throughout North America. The BBC and Canadian Broadcasting Corporation aired documentaries on his life and works, as a mark of respect to this infamous psychoanalyst and psychiatrist.
Continue Reading Below Israeli Celebrities
University Of Edinburgh
Moscow State University
Male Physicians
Israeli Physicians
Childhood & Early Life
Immanuel Velikovsky was born on June 10, 1895 in Vitebsk, Russian Empire (now in Belarus) into a wealthy Jewish family, as the youngest of three sons, to Shimon Velikovsky and Beila Grodensky.
He mastered various languages during childhood and was later sent to Medvednikov Gymnasium, Moscow, to complete his studies where he excelled in mathematics and Russian and graduated in 1913 with a gold medal.
He traveled widely across Europe, visited Palestine, and subsequently did a medicine course from Montpellier, France, and a paramedical course from the University of Edinburgh.
He returned to Moscow before World War I and obtained a medical degree from the University of Moscow in 1921. 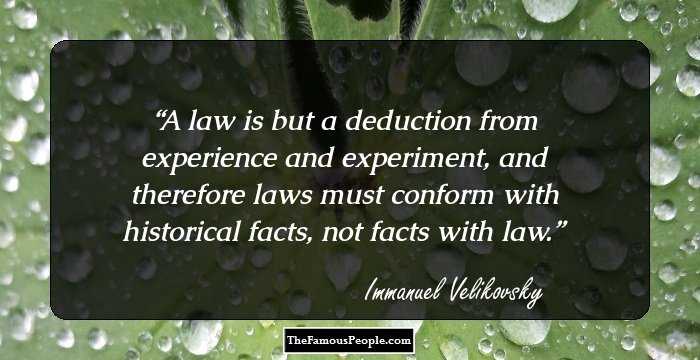 The Sexiest Men Of 2020, Ranked
Career
Immanuel Velikovsky moved to Berlin after completing his medical degree and took up editorial work at the ‘Scripta Universitatis’ journal, where Albert Einstein managed the mathematical-physical section.
In 1924, he went to Palestine to practice medicine and psychoanalysis, which he had studied under Wilhelm Stekel, student of Sigmund Freud, in Vienna. Besides, he also took up editing ‘Scripta Academica Hierosolymitana’.
He published his first paper on characterization of epileptics by pathological encephalograms. Also, he authored a number of papers, which were published in medical and psychoanalytic journals, including a few papers in Freud’s ‘Imago’.
In 1939, he went to New York with his family, just before the outbreak of World War II, on a one-year holiday and utilized the time to research on his book ‘Oedipus and Akhenaton’, based on Freud’s ‘Moses and Monotheism’.
He wrote his first book ‘Worlds in Collision’, which before its publication, aroused large controversy due to his interpretation of the solar system. The book described how 3,500 years ago Venus was ejected from Jupiter as a comet and its gravitational field moved other planets out of their orbits or affected their rotation – including Earth’s.
The book was released by Macmillan in 1950, after being rejected by eight publishing houses, but later Macmillan transferred it to Doubleday due to increased pressure from academicians and scientists, especially astronomer Dr. Harley Shapely.
Immanuel Velikovsky next book ‘Ages in Chaos’, which was a detailed study of historical reconstruction between the Exodus and early Divided Monarchy era from 1450 BC to 840 BC was published by Doubleday in 1952.
Depressed by the critic views on his ‘Worlds in Collision’, he authored ‘Earth in Upheaval’ in 1955. In this book, he gave geological and paleontological evidence to support the theory he postulated in ‘Worlds in Collision’.
After spending most of the 1950s till early 1960s as persona non grata on university and college campuses, his predictions were proved correct and he started receiving lecture requests. He delivered lectures to packed halls at universities across North America.
Continue Reading Below
In 1960, his book ‘Oedipus and Akhenaton’ was published.
He released two volumes: ‘Peoples of the Sea’ (1977) and ‘Ramses II and His Time’ (1978), which were initially planned as a sequel to ‘Ages in Chaos’ with the reconstruction extending to 33 BC.
As part of his ‘Ages in Chaos’ chronology, he completed two more works: ‘The Assyrian Conquest’ and ‘The Dark Ages of Greece’, which remained unpublished till his death and were later released online on ‘Velikovsky Archive’.
His books ‘Mankind in Amnesia’, a psychoanalytic work on his theory of collective amnesia, and ‘Stargazers and Gravediggers’, describing the hostility his work faced from academia, were released later in 1982 and 1983 respectively.
Major Works
His book ‘Worlds in Collision’, describing the ejection of Venus from Jupiter as a comet and the effect of its gravitational field on other planets, became a US non-fiction best-seller, despite being banned by various academic institutions.
Awards & Achievements
In 1974, Immanuel Velikovsky was awarded an honorary degree of Doctor of Arts and Science by the University of Lethbridge, Alberta.
Personal Life & Legacy
Immanuel Velikovsky got married to violinist and pianist, Elisheva Kramer, in 1923, in Berlin, Germany. The couple had two daughters: Shulamit Velikovsky Kogan, born in 1925, and Ruth Ruhama Velikovsky Sharon, born in 1926.
In 1975, a Center for Velikovskian and Interdisciplinary Studies was established at Rowan University in Glassboro, New Jersey, in his honor.
After suffering from diabetes and intermittent depression, he died on November 17, 1979 at his home in Princeton, New Jersey, at the age of 84.
Duane Vorhees wrote a biography of Velikovsky titled ‘The Jewish Science of Immanuel Velikovsky’.
His daughter, Ruth Ruhama Velikovsky Sharon, has written two biographies: ‘Aba – The Glory and the Torment – The Life of Dr. Immanuel Velikovsky’ (1995) and ‘Immanuel Velikovsky – The Truth Behind the Torment’ (2003).
Trivia
The journal ‘Scripta Universitatis’, where he edited scientific papers and translated them into Hebrew, became instrumental in establishing the Hebrew University of Jerusalem.
You May Like

See the events in life of Immanuel Velikovsky in Chronological Order