Idi Amin was a Ugandan military officer, often considered the most controversial leader of Uganda. He served as the third president of the country from 1971 to 1979, and was widely regarded as the ‘Butcher of Uganda’ for his mass massacre of people. Before serving in the topmost position of the country, he had a modest beginning. Deserted by his father and raised by his mother, Amin dropped out of school at a very young age. In 1946, he joined the British colonial regiment and served in Somali and Kenya. It was his sheer determination, persistence, and strength that helped him rise through the ranks. Eventually, he became the ‘Afande’ or warrant officer, which was the highest rank for a Black African in the British army. He became commander of the forces and in 1971, seized power by deposing Milton Obote in a military coup. Amin’s term as the president was marked by a period of immense disruption and annihilation. He expelled Asians from the country which further deteriorated the already-declining economy. He was essentially the reason behind the 1972 Uganda genocide which resulted in the death of more than one lakh people. Corruption, nepotism, human right abuse, and political repression were at peak during his rule. International relations also suffered as he sought to form alliance with Libya, Soviet Union, and East Germany. Interestingly, he never received Distinguished Service Order (DSO) or a Military Cross (MC) decoration. Furthermore, he conferred on himself a doctorate of law from ‘Makerere University’ and declared himself CBE or ‘Conqueror of the British Empire.’ He also gave himself the title ‘His Excellency President for Life, Field Marshal Alhaji Dr. Idi Amin Dada, VC, DSO, MC, CBE.’ Ranil Wickremas...
DID WE MISS SOMEONE?
CLICK HERE AND TELL US
WE'LL MAKE SURE
THEY'RE HERE A.S.A.P
Quick Facts

Presidents
Political Leaders
Male Leaders
Childhood & Early Life
Idi Amin was born Idi Amin Dada Oumee in either Koboko or Kampala, to Andreas Nyabire and Assa Aatte, an herbalist. His father Andreas was a member of the Kakwa ethnic group who later converted from Roman Catholicism to Islam. There are discrepancies regarding Amin's date and place of birth. While most sources claim that he was born around 1925, his son Hussein has said that Amin was born in 1928 in Kampala.
Abandoned by his father, Amin was brought up by his mother in the north-western part of Uganda. Academically, he received his early education from an Islamic school in Bombo. However, he left school when he was in fourth grade. 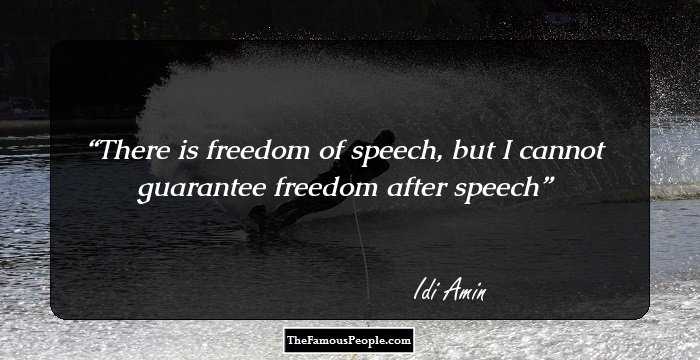 Continue Reading Below
Career
He took up various odd jobs to support himself, before being recruited as an assistant cook in the army in 1946 by a British colonial army officer.
In 1947, he was transferred to Kenya where he rendered his service to the 21st KAR infantry battalion in Gilgil for two years.
In 1949, along with the unit, he was sent to fight against the Somali rebels in the ‘Shifta War’ in North Kenya.
In 1952, his brigade was deployed to deal with the Mau Mau rebels in Kenya. He was promoted to the post of corporal in the same year. The following year, he was promoted to the post of sergeant.
In 1959, he was promoted to the rank of ‘Afande’ (warrant officer), the highest rank a Black African could hope to reach in the colonial British Army at the time.
In 1959, he returned to Uganda. Two years later, he was promoted to the rank of lieutenant, thus becoming the second ever Ugandan to become a commissioned officer. In his new capacity, he was assigned the task of controlling cattle rustling between Uganda's Karamojong and Kenya's Turkana nomads.
The independence of Uganda from the United Kingdom brought more good news for Amin as he was promoted to the rank of captain in 1962, eventually becoming a major the following year. In 1964, he was appointed to the post of deputy commander of the army.
Meanwhile, he developed close relations with the then Ugandan Prime Minister and President Milton Obote. Along with Obote, he smuggled gold, coffee, and ivory from Zaire in exchange for arms and ammunitions to the rebel troops in Congo.
In 1971, following a conflict between Obote and himself, he carried out a military coup against Obote. He then took control of the reigns of the country and vouched to hold free and fair elections to resume democratic rule in the country.
Continue Reading Below
He arranged for a state funeral to former King of Buganda and President Sir Edward Mutesa and freed many political prisoners. He declared himself the president of Uganda, commander-in-chief of the armed forces, army chief of staff, and chief of air staff.
In his new role, he made several changes. He instituted an ‘Advisory Defence Council,’ which primarily composed of military officers. Furthermore, soldiers were appointed to top government posts and parastatal agencies. ‘General Service Unit,’ an intelligence agency, was replaced by ‘State Research Bureau’ (SRB).
Meanwhile, Obote, who had taken refuge in Tanzania, began to form an army of his own. Subsequently, he was joined by 20,000 Ugandan refugees. However, Amin learned about Obote’s plan and organized ‘killer squads’ who were ordered to hunt and murder Obote’s supporters.
The year 1972 witnessed mass massacre as large number of people belonging to the Acholi and Lango ethnic groups were brutally exterminated in the Jinja and Mbarara Barracks. Death toll rose astronomically and included people from various walks of life, including religious leaders, journalists, artists, senior bureaucrats, lawyers, students, intellectuals, criminal suspects, and foreign nationals.
The same year, he expelled about 80,000 Asians from the country. The businesses held by the Asians were subsequently taken up by his supporters. Furthermore, he severed all diplomatic ties with the United Kingdom and nationalized British owned businesses.
His decision to wage the ‘economic war’ proved to be futile as it further deteriorated the already-declining economic condition of the country. Mismanagement and lack of knowledge and experience were the main reasons for the breakdown of the once-successful businesses.
During his presidency, international relations with countries, such as Israel, Kenya, United States, and the United Kingdom soured, while he maintained great relations with Libya and the Soviet Union. Libya provided him with financial aid and Soviet Union became the largest arms supplier to Uganda.
In 1976, under his administration, an ‘Air France’ aircraft was hijacked and forced to land at ‘Entebbe Airport.’ Jewish and Israeli citizens were held as hostages. However, a rescue operation was soon launched by the Israeli government which resulted in the death of seven hijackers and 45 Ugandan soldiers.
By 1978, his brutality and callousness led to a significant fall in the number of supporters. Moreover, the declining economic and infrastructure condition caused a withdrawal of support from his army.
The revolt reached its peak when Bishop Luwum and Ministers Oryema and Oboth Ofumbi were killed. His supporters fled to Tanzania. Subsequently, he launched an invasion over Tanzanian territory, seizing control of the Kagera Region across the boundary.
Ugandan exiles, who had formed the ‘Uganda National Liberation Army,’ supported Tanzania. Aided by the ‘Uganda National Liberation Army,’ Tanzania launched an attack. Following an attack by Tanzania’s ‘People Defence Force,’ Amin’s Ugandan army retreated. The Tanzanian forces eventually gained control over the capital city of Kampala.
Foreseeing the defeat, he fled to Libya on April 11, 1979. The following year, he moved to Saudi Arabia and remained there for the rest of his life. He made an attempt to return to Uganda in 1989, but was forced to continue to lead a life in exile by Zairian President Mobutu Sese Seko. 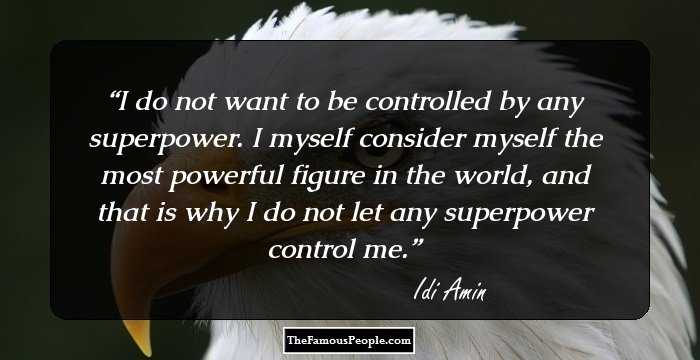 Personal Life & Legacy
A polygamist, Idi Amin had at least six spouses, including Malyamu Amin, Kay Amin, Nora Amin, Madina Amin, and Sarah Kyolaba Amin. He divorced his first three wives and is speculated to have fathered 40 children.
On July 19, 2003, he slipped into coma and was being treated at the ‘King Faisal Specialist Hospital and Research Centre’ in Jeddah, Saudi Arabia. On August 16, 2003, he died due to multiple organ failure. His body was buried in the ‘Ruwais Cemetery’ in Jeddah.
Trivia
Popularly referred to as the ‘Butcher of Uganda,’ this powerful politician was also a swimmer and light heavyweight boxing champion. 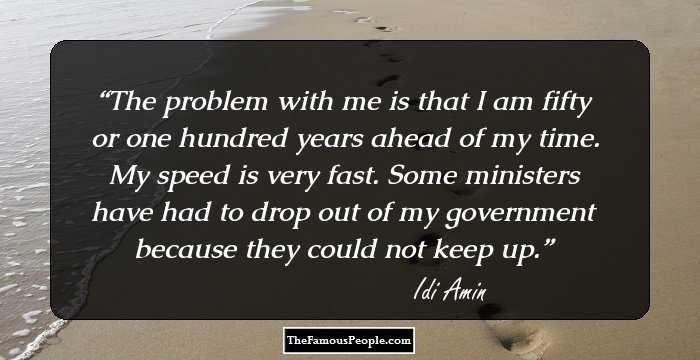 See the events in life of Idi Amin in Chronological Order