Advanced Search
Howard Schultz is an American businessman and writer. Born to Fred and Elaine Schultz he grew up with his siblings, Ronnie and Michael, in the CanarsieBayview Houses of the New York City Housing Authority. He was a natural athlete, and with a sports ticket attended Northern Michigan University. He received his bachelor’s degree in Communications. He took his first job as sale person for Xerox Corporation, and then moved up as sales representative. He joined Starbucks as the Director of Marketing. While on an official trip to Milan, Italy, he noticed that every street had coffee bars that served not only excellent espresso, but also as meeting places. He wanted to introduce the concept in the US. When the owners of Starbucks declined the proposal, he started on his own, and opened the store called ‘IlGiornale’. Two years later, the original Starbucks’ management sold its Starbucks retail unit to Schultz. He renamed IlGiornale to Starbucks,and aggressively expanded it across the US rapidly. He also bought NBA’s Seattle SuperSonics, but sold the team to Clayton Bennett after a few years. He married Sheri Kersch, an interior designer.They have two children: son,Eliahu Jordan and daughter, Addison. Schultz has won numerous awards for his entrepreneurial abilities. Mark Zuckerberg
19th July In History
DID WE MISS SOMEONE?
CLICK HERE AND TELL US
WE'LL MAKE SURE
THEY'RE HERE A.S.A.P
Quick Facts

American People
Restaurateurs
American Men
American CEOs
Cancer Entrepreneurs
Childhood & Early Life
Howard Schultz was born on July 19, 1953 to Fred Schultz, ex-US Army trooper and later truck driver, and Elaine. He grew up with his siblings in the Canarsie Bayview Houses of the New York City Housing Authority.
His family was poor, and his only relief was sports. He went to Canarsie High School, where he excelled at sports. He was awarded an athletics scholarship to Northern Michigan University.
He became the first person in his family to go to college. He was a member of Tau Kappa Epsilon, and received his bachelor’s degree in Communications in 1975. 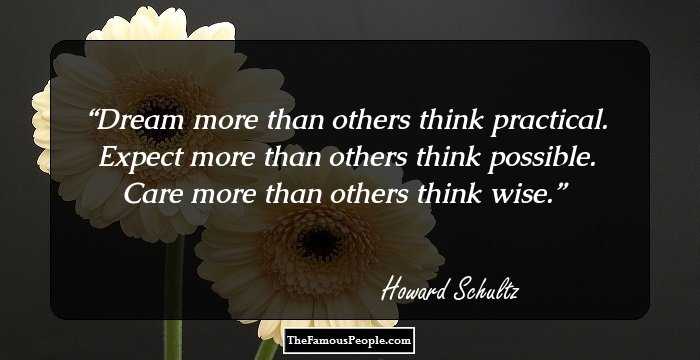 Quotes: Think
Continue Reading Below
Career
Schultz graduated, and became a salesperson for Xerox Corporation, and was soon promoted as sales representative. He became general manager for the US operations of Swedish drip coffee maker manufacturer, Hammarplast, in 1979.
In 1981, he visited Seattle-based coffee-bean shop called Starbucks Coffee Company, a client of Hammerplast, curious to know why they ordered so many plastic cone filters, and was impressed by their knowledge of coffee.
In 1982, he joined Starbucks as the Director of Marketing. While on an official trip to Milan, Italy, he noticed that every street had coffee bars that served as meeting places apart from espresso.
On his return, he persuaded the owners of Starbucks to launch a pilot café project of serving espresso beverages in addition to the whole bean coffee, leaf teas and spices. The project was successful.
The Starbucks owners did not want to get into the restaurant business. Schultz left Starbucks in 1985 to start business on his own. He needed $400,000. Jerry Baldwin and Gordon Bowker offered to help.
He wrote “Pour Your Heart Into It” with Dori Jones Yang, and “Onward: How Starbucks Fought for Its Life Without Losing Its Soul” with Joanne Gordon.
In 2000, he resigned as CEO of Starbucks. Eight years later, however, he returned to head the company. He partnered French yogurt maker Danone to offer a new Greek yogurt brand.
From 2001 to 2006, Schultz owned NBA’s Seattle SuperSonics. He sold the team to Clayton Bennett, chairman of the Professional Basketball Club LLC. The SuperSonics moved to Oklahoma City. The sale damaged his popularity.
In 2006, Schultz was ranked No. 359 on Forbes magazine’s “Forbes 400” list, which presents the 400 richest individuals in the US. Seven years later, he was ranked No. 311 on the same list.
Continue Reading Below
By 2012, Starbucks consisted of more than 17,600 stores in 39 countries around the world. Starbucks announced its largest ever acquisition by paying $620 million cash for Teavana Holdings Inc.
The company also opened its first stores in India in Oct 2012. Forbes magazine ranked Schultz as the 354th richest person in the US, with a net worth of $1.5 billion. 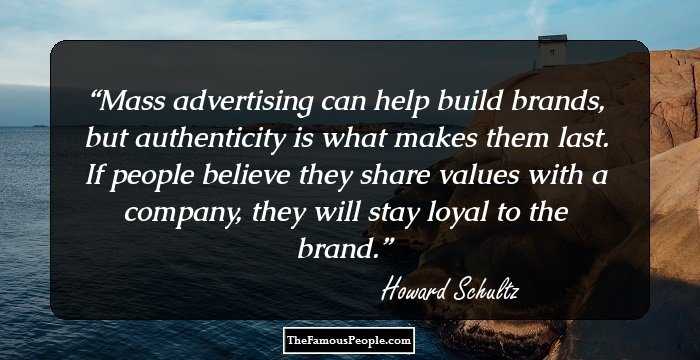 Quotes: Will, Believe
Major Works
Schultz opened his first store ‘IlGiornale’ in 1986. Two years later, Starbucks’ management decided to focus on Peet’s Coffee & Tea and sold its Starbucks retail unit to Schultz for $3.8 million.
He renamed Il Giornale as Starbucks, and aggressively expanded it across the US. He did not want to franchise the outlets, and retained its ownership.
Awards & Achievements
In 1998, Schultz was awarded the “Israel 50th Anniversary Tribute Award” from the Jerusalem Fund of Aish Ha-Torah for “playing a key role in promoting a close alliance between the United States and Israel”.
He was awarded the “National Leadership Award” for philanthropic and educational efforts to battle AIDS in 1999. Five years later, he received theInternational Distinguished Entrepreneur Award from the University of Manitoba.
He accepted the Rev. Theodore M. Hesburgh, C.S.C., Award for Ethics in Business at the Mendoza College of Business at the University of Notre Dame, and delivered the Frank Cahill Lecture in Business Ethics. 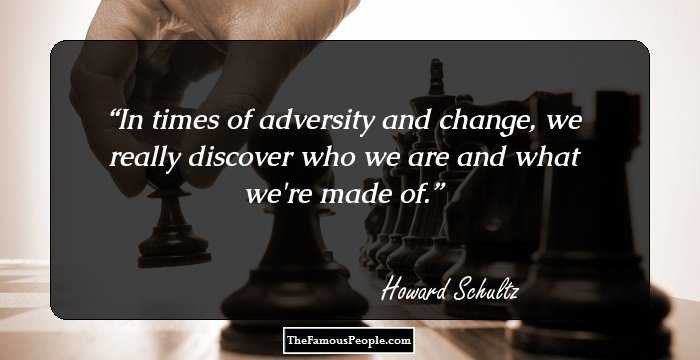 Quotes: Change
Personal Life & Legacy
In 1982, Schultz married Sheri Kersch, an interior designer, whom he had met four years before. They have two children: son, Eliahu Jordan and daughter, Addison.
His son Eliahu Jordan Schultz is a sportswriter for the Huffington Post.
He married Breanna Lind Hawes in 2011.
Trivia
This entrepreneur bought a property south of Viretta Park, and built a new home there. The neighbors protested because the driveway made the entrance to the park appear to be the entrance to the house.

Quotes By Howard Schultz | Quote Of The Day | Top 100 Quotes

See the events in life of Howard Schultz in Chronological Order