Advanced Search
Eric Villency is an American interior designer and businessperson. He is the current CEO of the interior and product design firm Villency Design Group. A New York native, Villency grew up in an affluent family. It was his grandfather, Maurice Villency, who set up a furniture company in New York City. Later, that company transformed into the Villency Design Group, and in 1998, Villency was made the CEO of the firm. Considered to be one of the most influential designers of today, Villency has received multiple awards for his contribution to the industry. He makes regular appearances on the ‘Today Show’ to converse on a variety of topics, including design trends, fashion, and family issues. He has also been featured on ‘Good Morning America’, ‘The Tyra Banks Show’, HGTV, Travel Channel, and TBS. For a period of time, he served as the host of Fine Living Channel's ‘iDesign’. Villency is a former model and has been active in the fashion industry for years. In 2007, he launched his own fashion brand, Restoration of the Monarchy. He is also a freelance writer, whose articles have been printed in publications like ‘Huffington Post,’ ‘The New York Times,’ ‘Details,’ ‘Best Life,’ ‘Women's Health,’ and ‘Departures.’ Chad Hurley
10th June In History
DID WE MISS SOMEONE?
CLICK HERE AND TELL US
WE'LL MAKE SURE
THEY'RE HERE A.S.A.P
Quick Facts

American People
American CEOs
Gemini Entrepreneurs
American Entrepreneurs
Gemini Men
Career
In 1932, Maurice Villency, Eric Villency’s grandfather, established a furniture company in New York City. After his grandfather, his father, Robert Villency, ran the company. Maurice Villency, Inc was eventually turned into the Villency Design Group. In 1998, Villency began his tenure as the CEO of the firm.
He is regarded as one of the most gifted and important designers of today. Recently, he was hailed as one of the most influential designers to watch by ‘Inc Magazine.’ ‘Well + Good’ dubbed him the "The Wizard of Wellness". In 2001, he received the FIT “All Star Salute” award, for being a leading figure in design and fashion. A year later, he supervised the opening of the Maurice Villency flagship store, which is situated on the 57th street in midtown Manhattan. He also introduced the firm’s first home accessories collection. In 2006, Villency set up Villency Atelier, which is a workshop focused on custom design and fabrication for design professionals. In 2007, he was the recipient of the IFDA Design Industry award. He founded Villency Pure Design, a company that makes environmental-friendly furniture in USA, in 2008. He has also delivered a lecture at Savanah College of Art & Design.
After opening his business-to-business service, Villency Contract, in 2008, Villency has been able to provide a platform for design projects like the Rudy Giuliani Urgent Care Unit at St. Vincent's Hospital, the Delta Air Lines Miami Crown Lounge, the Club level lounge at Citifield, Starwood brands including W hotels and Sheraton, the Bryant Park Hotel, the Plaza private residences, and office for Kathy Lee Gifford. He has also ventured into the boutique fitness market by designing SoulCycle and Peloton fitness bikes.
Over the years, Villency has made multiple appearances on the ‘Today Show’ to speak to the hosts about numerous topics, from design trends to fashion to family issues. He has also been interviewed on ‘Good Morning America’, ‘The Tyra Banks Show’, ‘HGTV,’ Travel Channel, and TBS. At one point, he hosted the Fine Living Channel's ‘iDesign’. A short while ago, he served as the executive producer and host of ‘INSEAM’, a documentary that focuses on the lives of upcoming talented fashion designers.
As a freelance writer, Villency is associated with publications like ‘Huffington Post,’ ‘The New York Times,’ ‘Details,’ ‘Best Life,’ ‘Women's Health,’ and ‘Departures.’ In the early days of his professional life, Villency was a model. That has allowed him the opportunity to create powerful connections in the fashion industry. He has set up the Villency Emerging Fashion Fund, which has formed professional relationships with fashion designers like Proenza Schouler, Derek Lam, Imitation of Christ, Ruffian, and Erin Featherston. Villency was the designer of the Mercedes-Benz Star Lounge at New York's Fashion Week in February 2009.
In 2007, Villency established his fashion brand Restoration of the Monarchy. In September, the brand introduced its men’s and women’s denim lines.
Continue Reading Below
Family & Personal Life
Eric Villency was born on June 10, 1975, in New York City, New York, USA, to Rowann and Robert Villency. His mother is a mixed media artist while his father served as the CEO of Maurice Villency, Inc. from 1965 to 2005. He has an older sister named Cara Beth. Villency studied at the University of Wisconsin.
Villency exchanged wedding vows with former assistant District Attorney of San Francisco and co-host of ‘The Five’ on Fox News, Kimberly Guilfoyle, on May 27, 2006, on the island of Barbados. Their son, Ronan Anthony, was born on October 4, 2006. The couple parted ways in 2009. He married his second wife, Swedish designer Caroline Fare, on December 14, 2013, in West Palm Beach. They split in 2017. At present, he resides in New York City, New York with his son Ronan. 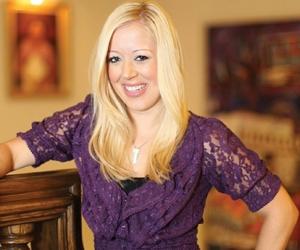