Heinrich Hertz was a German scientist and physicist who became the first scientist to prove that electromagnetic waves did indeed have an existence and in so doing he proved what had only been a theory first put forwards by the Scottish physicist James Clerk Maxwell. His theories went on to be developed into what later came to be known as radio waves, however, it is also important to point out that another huge conclusion from his research on electromagnetic waves was that he was also able to prove that both light and heat are different forms of electromagnetic radiations. Other than being a gifted exponent of the sciences from an early age, Hertz was also a linguist who excelled in learning new languages and it is not a surprise that he was trained in languages like Sanskrit and Arabic which were rarely learnt by students at the time. Last but not the least, Hertz might have had a relatively short career compared to other scientists of the era but there is absolutely no denying the fact that he achieved a lot in his short career that many others would have been proud of and needless to say he has left behind a rich body of work that would be studied in universities for years. Horst Ludwig St...
Physicists #31
Scientists #84
DID WE MISS SOMEONE?
CLICK HERE AND TELL US
WE'LL MAKE SURE
THEY'RE HERE A.S.A.P
Quick Facts

German People
Male Scientists
Male Physicists
Pisces Scientists
German Physicists
Childhood & Early Life
Heinrich Rudolf Hertz was born on 22 February 1857 to Gustav Ferdinand Hertz and Anna Elisabeth Pfefferkom, in Hamburg, Germany. His father worked as a barrister and went on to become a member of the senate.
Heinrich Hertz started attending the school Gelertenschule des Johanneums located in Hamburg and during his time at the school he showed genuine liking for the sciences and at the same time he also learnt languages like Sanskrit as well as Arabic.
After graduating from school and displaying a natural gifts for the sciences; Hertz had the option of either studying the sciences or go for engineering. However, engineering was not something he liked and after he secured support from his father; Hertz enrolled at the University of Munich in 1877.
In 1880, Heinrich Hertz submitted his doctoral thesis that dealt with the subject of electromagnetic induction and the same year the University of Berlin awarded him with his doctorate. In the following years, Hertz served as an assistant to Hermann von Helmholtz as part of his post-doctoral study at the University of Berlin. 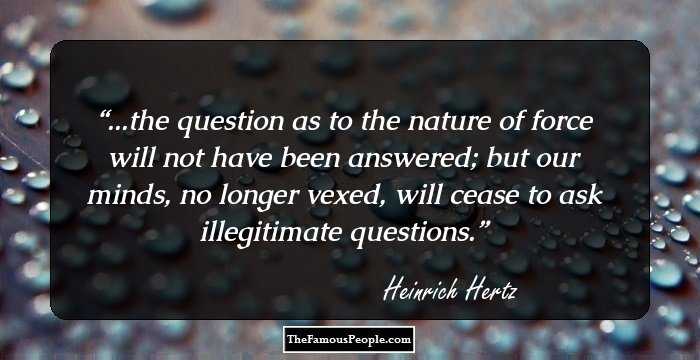 Quotes: Nature, Will
Continue Reading Below
You May Like

See the events in life of Heinrich Hertz in Chronological Order