If a list of the most seasoned actors produced in the world is to be compiled, Heath Ledger’s name definitely deserves a mention. Although his lifespan was really short, his accomplishments as an actor, even during this brief period will be remembered by movie lovers for a really long time. Heath, who made his debut through the television series ‘Roar’, went on to prove his acting prowess through many other films such as ‘The Brothers Grimm’ and ‘Brokeback Mountain’. His roles in these flicks were noticed by the jury members of many award ceremonies, who felicitated him with many honors for his performances. However, it was his portrayal of the Joker in maverick filmmaker Christopher Nolan’s flick ‘The Dark Knight’ which made him a household name across the globe. Many critics as well as audiences compared Ledger’s performance with the works of yesteryear greats like Marlon Brando and Al Pacino and even hailed him as one of the greatest actors of all time. Ledger’s dedication towards his work has earned the respect of the whole film fraternity and it’s unfortunate that the actor passed away before reaching many other career milestones. His performances are even known for being institutions of great acting themselves Liam Hemsworth
4th April In History
DID WE MISS SOMEONE?
CLICK HERE AND TELL US
WE'LL MAKE SURE
THEY'RE HERE A.S.A.P
Quick Facts

Australian Celebrities
Australian Men
Tall Celebrities
Tall Male Celebrities
Aries Actors
Childhood & Early Life
Heath was born to Kim and Sally Ledger, in Perth, Australia, on the 4th of April, 1979. While his mother was a teacher who taught French, his father pursued a career in race car driving.
He pursued his primary education at institutions such as ‘Mary’s Mount Primary School’ and ‘Guildford Grammar School’. He played the role of Peter Pan in one of the plays he had participated during his school days, at the tender age of ten.
When he was hardly 17 years old, Heath discontinued his studies to pursue a career in acting. Almost immediately, he bagged the role of a gay man in the 1996 television series named ‘Sweat’. 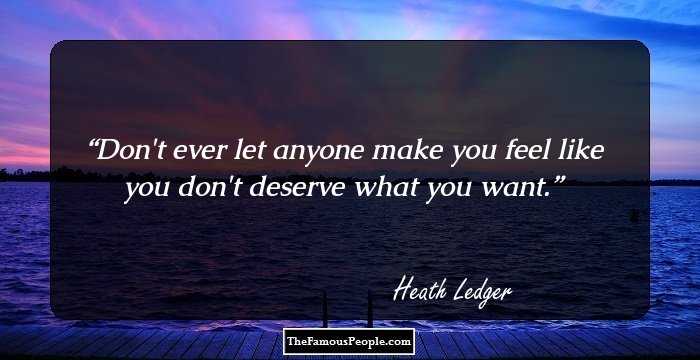 Quotes: You, Like
Continue Reading Below
Career
In 1997, two opportunities came knocking at Ledger’s door in the form of ‘Roar’ and ‘Home and Away’. While ‘Roar’ was a fantasy action adventure series, ‘Home and Away’ was a soap opera targeted at Australian audiences.
The Australian flick ‘Blackrock’, which released the same year, marked his movie debut. Ledger had essayed the role of Toby Ackland in this 1997 thriller film.
In 1999, Heath Ledger was cast in the blockbuster American comedy flick ’10 Things I Hate About You’. The character, Patrick Verona, which he had portrayed in this flick, was of great significance to the plot.
The same year he also starred in the Australian crime flick ‘Two Hands’. The movie went on to receive a string of actors and even a nomination for Ledger in the ‘Best Actor’ category.
After making waves in the movie industry through his first few works, Ledger became a part of the Hollywood icon Mel Gibson starrer, ‘The Patriot’, in 2000. The same year, he also became a part of the ensemble cast of ‘Monster’s Ball’, which also included the famous actress Halle Berry.
During the period 2001-03, this actor starred in four other films, namely ‘A Knight’s Tale’, ‘The Order’, ‘The Four Feathers’ and ‘Ned Kelly’.
In 2005 alone, three of Ledger’s movies, namely ‘The Brothers Grimm’, ‘Casanova’ and ‘Lords of Dogtown’. His roles in all these three flicks were well-acclaimed and made both film-industry insiders as well as audiences to stand up and take notice.
Heath’s career reached its peak after the flick ‘Brokeback Mountain’, directed by Ang Lee, was released. The movie won him a lot of recognitions and even catapulted him to the status of being one of the most bankable actors of the film world.
His next release was the 2006 flick ‘Candy’, which was loosely based on the novel ‘Candy: A Novel of Love and Addiction’. His portrayal of the character Dan, in this movie, fetched him numerous awards.
Continue Reading Below
The same year, he also ventured into direction and filmed a music video for a track of the Australian hip-hop album ‘Cause an Effect’. 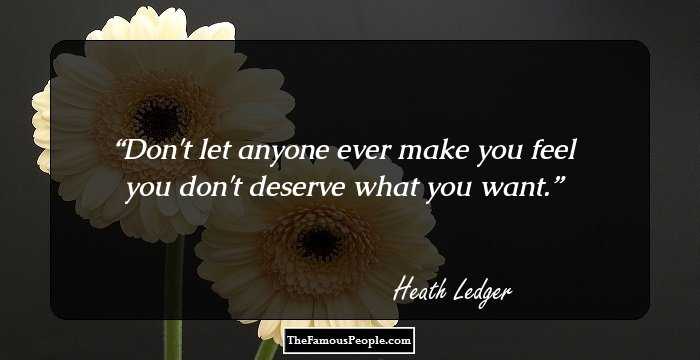 Major Works
The role which made Ledger immortal was his portrayal of the Joker in the 2008 flick ‘The Dark Knight’. The movie went on to become a top-grosser worldwide and this actor was even honoured with the prestigious Academy award.
Awards and Achievements
His role in the movie ‘Candy’ won him a ‘Film Critics Circle of Australia Award’ in the ‘Best Actor’ category.
Heath was honoured with the ‘New York Film Circle Award’ in the ‘Best Actor’ category for his role in the flick ‘Brokeback Mountain’.
He was even nominated for the prestigious ‘Academy Award For the Best Actor’ as well as ‘BAFTA Award for Best Actor in a Leading Role’ for his portrayal of Ennis Del Mar in the same film. 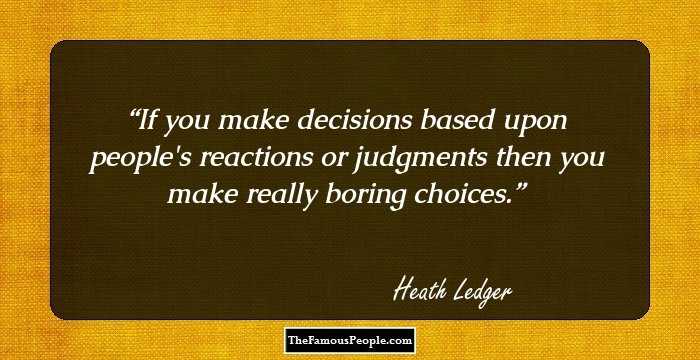 Quotes: You
Personal Life & Legacy
Ledger was a great Chess player in his younger days, and even won a contest when he was hardly 10-years-old.
Apart from acting, Ledger was known for his love affairs with well-known actresses such as Naomi Watts, Lisa Jane and Heather Graham.
While filming ‘Brokeback Mountain’, in 2004, he started seeing actress Michelle Williams. The duo later became parents to a baby girl named Matilda Ros, who was born the next year. However, his relationship with Michelle turned sour soon after and they split.
Unfortunately, Ledger succumbed to death in early 2008, due to an overdose of drugs, months before his best work ‘The Dark Knight’ released.
He was posthumously felicitated with the ‘Academy Award for Best Supporting Actor’ as well as a ‘Golden Globe Award for Best Supporting Actor’ for his performance in the Hollywood blockbuster ‘The Dark Knight’.
Trivia
While filming ‘The Dark Knight’, Ledger would often keep the ‘Joker’s Diary’ handy, which contained notes which helped him get into the skin of the character.

Quotes By Heath Ledger | Quote Of The Day | Top 100 Quotes

See the events in life of Heath Ledger in Chronological Order