Harlan Ellison is considered to be one of the greatest writers ever in the genre of speculative fiction. As a youngster, Ellison displayed his fearlessness by repeatedly running away from home and taking on a variety of unusual jobs. Best known for his short stories, the extremely prolific Ellison also wrote screenplays, teleplays, comic book scripts, novellas, essays and a large assortment of criticism. He never confined himself to conventions and experimented wherever possible, pushing others to do the same. He was also the editor of two pioneering science-fiction anthologies, for which he was given a lot of credit for urging the contributing writers to write in a non-traditional way. His unwillingness to let his scripts be altered for commercialization led him to walk out of many TV and Hollywood projects. Whenever his works were modified, Ellison expressed his disapproval by refusing to lend his own name and used the pseudonym of ‘Cordwainer Bird’ instead. Adored and detested in equal measure, contentious Ellison was never shy of expressing his opinion in the strongest of terms. But, there are no divided opinions on his writings, as Ellison has enthralled his fans and critics alike with his incredible body of work. American Celebrities
Short Story Writers
American Men
Ohio State University
Male Writers
Childhood & Early Life
Harlan Ellison was born to Serita Ellison, a housewife and Louis Ellison, a dentist-turned-jewelry salesman in Cleveland, Ohio.
Harlan’s family moved to Painesville, Ohio, where he faced severe discrimination for being a Jew and was an outcast. His family returned to Cleveland after his father died.
During his eventful childhood and adolescence, Ellison often ran away from home and took up unusual jobs such as tuna fisherman, travelling crop-picker, bodyguard, truck driver, cook, lithographer, book salesman etc.
He also acted in several plays at the ‘Cleveland Play House’, a local theatre company in Cleveland. Ellison was an avid reader of science-fiction and fantasy and wrote for the Cleveland science-fiction society’s amateur magazine, ‘Science-Fantasy Bulletin’.
In 1949, he got his two stories published in the local newspaper ‘Cleveland News’ and after a few years sold a story to ‘EC Comics’.
From 1951 to 1953, Ellison attended Ohio State University for 18 months before being ousted from the University, for hitting his creative-writing professor who had criticized his work. 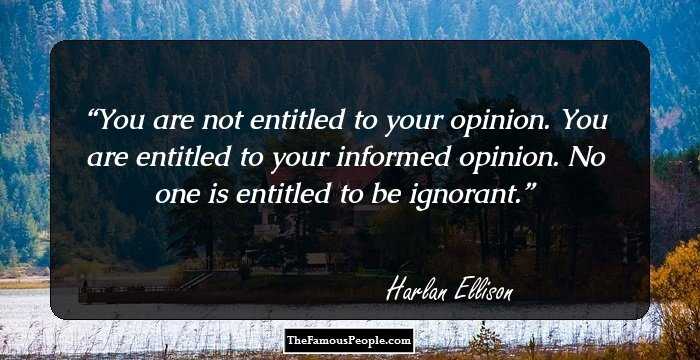 Famous Beautiful Women With Green Eyes
Career
In 1955, Ellison moved to New York City to pursue a career as a writer, particularly in the genre of science-fiction. He published more than 100 articles and short stories in the next couple of years.
Soon after reaching New York, Ellison wanted to write about youth gangs and as a part of his research, joined one such gang incognito in the Red Hook area of Brooklyn. The gang was called ‘The Barons’ and Harlan acted as the gang’s war counsellor for 10 weeks.
This experience was used in Ellison’s novel ‘Web of the City/Rumble’, the collection ‘The Deadly Streets’ and ‘Memos from Purgatory’, a part of his memoir.
From 1957 to 1959, Ellison served in the US Army, returning to New York afterwards. During this time, he wrote a lot of erotic stories, such as ‘God Bless the Ugly Virgin’ and ‘Tramp’, which were later reprinted in magazines.

In 1959, he moved to Chicago and worked as the editor of the ‘Rogue Magazine’. Later, he was involved in the formation of ‘Regency Books’, subsequently becoming a book editor. He edited works by prominent authors such as B. Traven, Kurt Vonnegut, Robert Bloch and Philip Jos Farmer etc.

In 1962, he moved to California and started his tryst with Hollywood. He wrote screenplays for the film, ‘The Oscar’ and many TV shows such as ‘The Flying Nun’, ‘Burke's Law’, ‘Route 66’, ‘The Outer Limits’, ‘Star Trek’, ‘The Man from U.N.C.L.E.’, ‘Cimarron Strip’ and ‘The Alfred Hitchcock Hour’.
During the late 1960s, he wrote a column called ‘The Glass Teat’ for the ‘Los Angeles Free Press’. The column dealt with political and social issues presented on television.

He was recruited as a writer for the famous ‘Walt Disney Studios’. On his first day, he was joking about the concept of making a pornographic movie featuring Disney characters which was overheard by CEO ‘Roy O. Disney’, leading to his termination the same day.

Ellison kept publishing short works in different publications. ‘’Repent, Harlequin!” Said the Ticktockman’, ‘I Have No Mouth, and I Must Scream’ and ‘A Boy and his Dog’ are among his best-known short stories.
Continue Reading Below
He edited the ‘Dangerous Visions’, a science-fiction short story collection, also providing biographies of the authors in the book.
He was the ‘Creative Consultant’ for TV shows ‘The Twilight Zone’ and ‘Babylon 5’. He also did commentary on many films and TV shows.
In 1986, Ellison started hosting the radio show ‘Hour 25’ on ‘Pacifica Radio’ in Los Angeles. Harlan had formerly been a recurrent and popular guest at the show. Drawing from this experience as the host, he wrote a short story called ‘The Hour That Stretches’
In the 1990s, he did commentary for the program ‘Sci-Fi Buzz’ broadcast on the ‘Sci-Fi Channel’. He also lent his voice in audiobooks written by both himself and other authors.
In 2012-2013, Ellison voiced for his own character in ‘Scooby-Doo! Mystery Incorporated’, ‘The Shrieking Madness’ and ‘Come Undone’. He again lent his voice to his own character in one episode of the TV show ‘The Simpsons’. 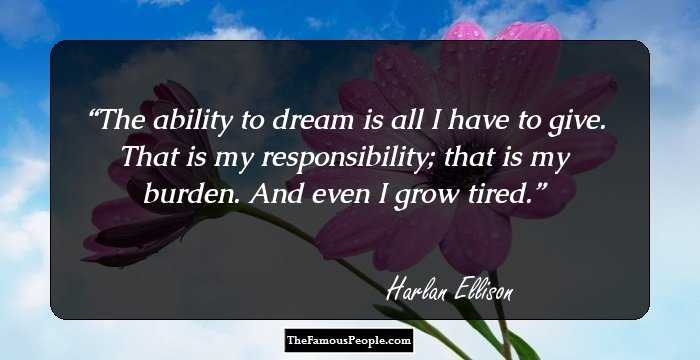 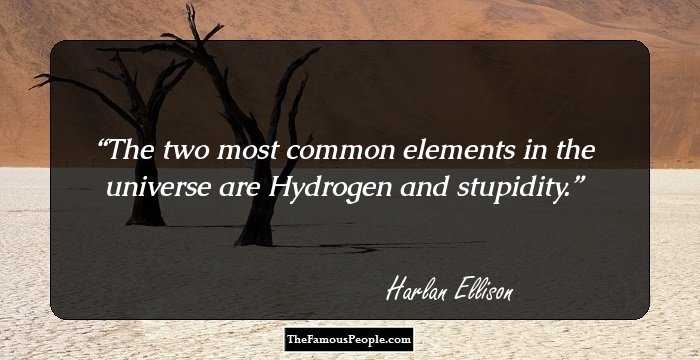 He used several pseudonyms throughout his writing career, the most popular one being ‘Cordwainer Bird’. Ellison used this particular pen name when his work was modified without his approval.

Ellison had been a great advocate of civil rights. In 1965, he participated in the ‘Bloody Sunday March’ from Selma to Montgomery, a protest march supporting the ‘American civil rights movement’, led by ‘Martin Luther King, Jr.’.

Ellison was embroiled in controversies throughout his career, that arosed from his crude and argumentative temperament. Some of those issues included defamation lawsuits, copyright suits, personal feuds and boycotting any work which did not provide him with creative freedom.

This famous science-fiction writer was expelled from ‘Ohio State University’ for punching his professor who criticized his writing. Over the next 40-years, the writer sent that professor a copy of every story he published.

Quotes By Harlan Ellison | Quote Of The Day | Top 100 Quotes

See the events in life of Harlan Ellison in Chronological Order