George Clooney is an American actor, producer, writer, director, and activist. Since making his acting debut in 1978, he has gone on to become one of Hollywood’s hottest A-list leading men. Twice named ‘The Sexiest Man Alive’ by ‘People’ magazine, his looks and charm have also led to ‘Time’ magazine dubbing him ‘the last movie star.’ He once declared he would be single forever; however, fate had different plans and he is now happily married. He has earned numerous awards and nominations for his exceptional acting, producing, and directorial skills. With all his success, he has never forgotten about the oppressed of the world. He continuously uses his status to raise awareness about gay rights and to help those in political and environmental crises. Alongside his father, Clooney has worked tirelessly to bring global attention to the conflict in Darfur, Sudan, going as far as speaking not only to the ‘United Nations’ but also the ‘European Union.’ One of the many humanitarian organizations he works with is ‘Not on Our Watch Project.’ He is truly one of a kind and an authentic living legend. American People
American Men
Kentucky Actors
Taurus Actors
American Actors
Childhood & Early Life
George Timothy Clooney was born on May 6, 1961, in Lexington, Kentucky, USA, to entertainer Nick Clooney and beauty queen Nina Bruce. He was the younger of the two children, the other being his older sister Adelia. His aunt is actress Rosemary Clooney.
In high school, he developed Bell’s palsy. The paralyzed portions of his face earned him the nickname ‘Frankenstein.’ Though he overcame Bell’s palsy, it left a profound effect.
He never graduated from college. After participating in a local production staged by his cousin, Clooney left for California where he spent five years studying acting at the ‘Beverly Hills Playhouse.’ 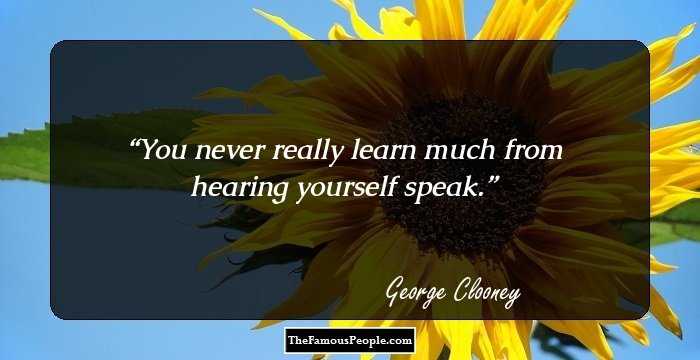 Quotes: You, Never, Yourself
Continue Reading Below
Career
Clooney made a living by selling women’s shoes before making his television debut in the 1978 mini-series ‘Centennial.’ He spent the next ten years playing small roles in sitcoms like ‘The Facts of Life’ and ‘Roseanne.’
In 1994, he landed a role in the hit drama ‘ER.’ His association with the series continued for the next five years wherein he played the character of Doug Ross, a womanizer.
In 1996, his movie career took off when he starred in the cult-classic ‘From Dusk till Dawn.’ He then took a completely different route, starring alongside Michelle Pfeiffer in the rom-com ‘One Fine Day.’
His lead role in 1997’s ‘Batman & Robin’ was deemed a failure. Even the actor himself was quoted as saying the film “may have killed the franchise.”
The year 1998 saw him starring in ‘Out of Sight’ and ‘The Thin Red Line.’
‘Three Kings,’ a war drama, co-starring Mark Wahlberg came out in 1999. The next year, he once again teamed up with Wahlberg for ‘The Perfect Storm’ and starred in the award-winning film ‘O Brother, Where Art Thou?’
2001 saw the first of the highly successful ‘Ocean’s Eleven’ trilogy. He also co-founded ‘Section Eight Productions’ the same year.
Clooney made his directorial debut in ‘Confessions of a Dangerous Mind’ in 2002. He also starred in the sci-fi film ‘Solaris.’
He directed, produced, and starred in ‘Good Night, and Good Luck’ in 2005. The following year, he starred in ‘The Good German’ and started ‘Smokehouse Pictures Production Company.’
Continue Reading Below
He played a legal ‘fixer’ in Tony Gilroy’s 2007 directorial venture ‘Michael Clayton.’ The same year, he directed ‘Leatherheads.’
In 2009, he co-starred in ‘The Men who Stare at Goats’ and ‘Up in the Air.’ He then went on to voice the lead character in the animated film ‘Fantastic Mr. Fox.’
In 2011, he starred in ‘The Descendants’ and co-wrote and directed ‘The Ides of March.’
In recent years, Clooney has shown no signs of slowing down. From 2013-2015, he starred in movies, such as ‘Gravity,’ ‘Monuments Men,’ and ‘Tomorrowland.’
In 2016, he was seen in the comedy film ‘Hail, Caesar!’ In the same year, he was also seen in the thriller film ‘Money Monster’ which was directed by Jodie Foster. The following year saw Clooney donning the director’s cap for the black comedy film ‘Suburbicon.’ The movie failed at the box-office and received negative reviews.
In 2019, he released his mini-series ‘Catch-22’ on ‘Hulu.’ Apart from acting in the series, he also served as the director and executive producer. 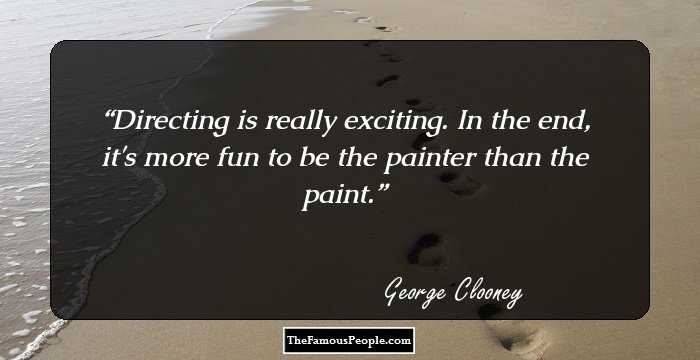 Major Works
2001’s ‘Ocean’s Eleven’ was one of Clooney’s most successful films as it earned over $450 million. The movie went on to spawn two sequels, ‘Ocean’s Twelve’ (2004) and ‘Ocean’s Thirteen’ (2007) and established George as the leader of ‘The New Rat Pack’ whose members included Brad Pitt, Matt Damon, and others.
In 2005, he starred in ‘Syriana.’ This movie earned him an ‘Oscar’ and a ‘Golden Globe.’ Clooney suffered a severe spinal injury during filming and underwent two surgeries. The pain was so severe that he contemplated suicide.
Continue Reading Below
Awards & Achievements
In 2001, he received a ‘Golden Globe’ for ‘O Brother, Where Art Thou?’
2006 was a big year as this talented actor won an ‘Oscar’ for his role in ‘Syriana’ and won the ‘American Cinematheque Award.’
He received the ‘Summit Peace Award’ in December 2007 for raising awareness about the situation in Darfur.
His work in ‘The Descendants’ won him the ‘Broadcast Film Critics Association Award’ and a ‘Golden Globe’ in 2012.
Clooney won his second ‘Oscar’ in 2013 as a producer of ‘Argo.’
On January 11, 2015, he received the ‘Golden Globe Cecil B. DeMille Lifetime Achievement Award.’ 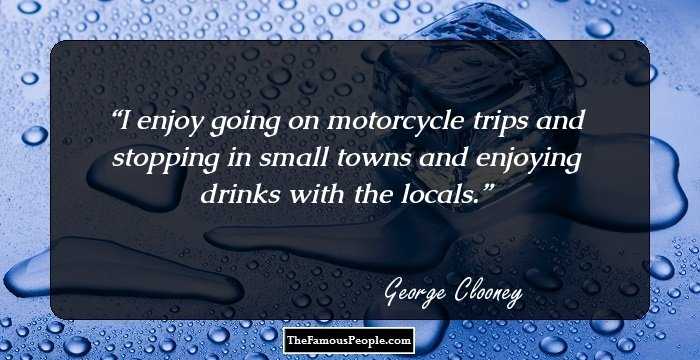 Quotes: I
Personal Life & Legacy
His charm and good looks earned him the number 1 spot on TV Guide’s ‘Sexiest Stars of All Time’ in 2005. He has also been listed on ‘Time’ magazine’s ‘100 Most Influential People in the World’ in 2007, 2008, and 2009.
After his first marriage dissolved, Clooney declared that he would never marry again. But as fate would have it, this charismatic actor met his match in human rights lawyer Amal Alamuddin. They got married on September 27, 2014.
He helped raise funds for victims of the 2010 Haiti earthquake, 2004 tsunami, and 9/11 terrorist attacks. He has been serving as a ‘United Nations Messenger of Peace’ since 2008 and co-founded the ‘Satellite Sentinel Project.’
He was arrested for civil disobedience after protesting outside the Sudanese Embassy in 2012.
Clooney and his wife are staunch supporters of LGBT rights and have helped the Syrian refugees. They have pledged $500,000 following the ‘Stoneman Douglas High School Shooting’ in 2018.
Trivia:
The famous actor was invited to try out for the ‘Cincinnati Reds’ in 1977. He did not make the team.
Clooney bought his girlfriend a potbellied piglet named Max as a gift. After breaking up with his girlfriend, he kept Max until he died 18 years later.

Quotes By George Clooney | Quote Of The Day | Top 100 Quotes

See the events in life of George Clooney in Chronological Order