Advanced Search
Edward the Elder was the King of Wessex from 899 until his death in 924. Known for his patience and military strategies, he was able to unite Wessex and Mercia by taking over southeast England and the Midlands. His sister Ethelflaeda played a pivotal role in helping him in his endeavours. Together, they brought England under one rule by winning over the Danes, Britons and Scots, thus building one of the most powerful kingdoms in the British Isles. He maintained his leadership by following his sister’s strategy of establishing fortified towns, or burhs, throughout the region of Mercia. Edward’s discord with the monks of Old Minster and its bishop prompted him to establish monasteries in Ramsbury, Sonning, Wells, and Crediton. He was known to have revived the practice of trial by ordeal in cases of perjury. Though a good leader, he is barely acknowledged by modern historians mostly because he did not match up to his father who was considered a far more capable leader. In fact, his father was believed to have left no stone unturned in trying to ensure that his son eventually assumed the throne after him. After Edward’s death, his son Aethelstan became the successor to the throne. British People
British Emperors & Kings
British Historical Personalities
Childhood & Early Life
Edward was born in around 874 to Alfred the Great and his wife Ealhswith, as their second child. He had an elder sister, Ethelflaeda, and two more sisters named Aethelgifu, abbess of Shaftesbury, and Aelfthryth. They were followed by a younger brother named Aethelweard.
In the first instance of its kind, Edward’s younger sister Aelfthryth and he received education together. They studied English works such as the Psalms and old poems with tutors at the court. They were given lessons on the importance of gentleness and humility.
Even though Edward was rightfully the immediate successor to his father’s throne, he still faced a threat of being challenged by his cousins who could claim a right to the throne. King Alfred’s older brother Aethelred had died at a young age, leaving behind his two infant sons, Aethelhelm and Aethelwold.
To improve Edward’s chances of sitting on the throne, Alfred ensured that he became popular amongst his people by taking him on his royal trips. He guided Edward in giving military commands. Furthermore, he also promoted officials who seemed to be in favour of his son.
Continue Reading Below
Accession & Reign
King Alfred died on 26 October 899 after which Edward became the next king of the Anglo-Saxons. However, he was challenged by his cousin Aethelwold, who took over royal estates and established his camp at Wimborne in Dorset.
Edward prepared his army for a fight but Aethelwold absconded one night, taking refuge in Northumbria, where he eventually presided over as the king. In 901, Aethelwold, now an ally of the Danes, returned to Wessex backed by an army and challenged Edward for the throne.
The ensuing battle led to several casualties on both the sides. But it was eventually Edward’s side that rose in triumph as Aethelwold died while fighting against Edward's army in the Battle of the Holme in 902.
England’s war against the Danes continued for years. In this fight, his sister Ethelflaeda proved to be of great help as she led the Mercian army in aid of her brother.
Ethelflaeda was married to Ethelred of Mercia. After the death of her husband in 911 she took over Mercia as ‘Lady of the Mercians’.
Together, Edward and Ethelflaeda fought fiercely against the Danes. Taking a cue from her father’s strategies, Ethelflaeda built a line of fortresses along the Mercian borderline similar to that built by her father on the Wessex borders. These fortresses were used not just for defence against the enemies but also to keep a tab on captured property.
The pair of siblings fought the Danes so fiercely that they had to eventually withdraw attacks on Wessex and Mercia. Edward then succeeded in capturing Strathclyde and parts of Northumbria.
Ethelflaeda passed away on 12 June 918 at Tamworth and was buried with her husband at St Oswald's Minster. Mercia was then taken over by Edward. He also brought the remaining Danish armies in the Midlands under his rule as they eventually surrendered to the King of England.
Mercia, however, was mostly governed by his niece Elfwina. Edward continued developing new burhs at Rhuddlan, Thelwall, and Manchester to be able to control the region better. He even segregated Mercia and the eastern Danelaw into shires.
Continue Reading Below
His interference in Mercia’s affairs was not looked upon favourably by the Mercians who launched a revolt in 919 that Edward was able to quell.
During his reign, Edward built the New Minster monastery following his fallout with the monks of Winchester Cathedral, and its bishop, Denewulf. It is believed that the New Minster was meant to be a royal mausoleum as he shifted his father’s body from Old Minster to New Minster. His mother Ealhswith, brother Aethelweard, and son Aelfweard along with Edward himself were all buried in New Minster.
During his rule, he reinforced the practice of ‘trial by ordeal’. This law was meant to be the only way to conduct trial pertaining to perjury.
Personal Life & Legacy
Sometime around 893, Edward married Ecgwynn, who is believed to be related to St Dunstan. Together, the couple had a son and a daughter. Their son Aethelstan went on to ascend the throne after Edward. Their daughter was married off to the King of Northumbria, Sihtric. Ecgwynn passed away around 899 after which Edward remarried.
His second wife Aelfflaed was the daughter of Ealdorman, Aethelhelm of Wiltshire. Together, the couple had six daughters and two sons. Their daughter Eadgyth was married to the Holy Roman Emperor, Otto I, while Eadgifu was married to Charles ‘the Simple.’ Eadhild’s husband was the Duke of Paris known as Hugh ‘the Great.’
Two of their daughters, Eadflaed and Eadhilds, embraced nunnery. Their older son Aelfweard presided over as the King of Wessex while their younger son Edwin died prematurely due to a drowning accident.
Edward then married Eadgifu in 919. Her father Sigehelm was the Ealdorman of Kent. She gave birth to four children, of which two sons, Edmund and Eadred, went on to become the future rulers of England.
King Edward passed away in 924 at Farndon, near Chester, succumbing to the injuries he had suffered while trying to contain the Chester revolt. His mortal remains were buried in the New Minster, Winchester. He was succeeded by his eldest son, Aethelstan.
Trivia
The moniker ‘the Elder’ was first mentioned in the book ‘The Life of St Aethelwold’ by Wulfstan the Cantor to avoid confusing him with the later King Edward ‘the Martyr’. 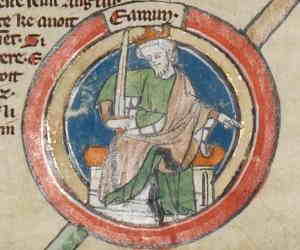