(English Novelist, Poet and One of the Leading Writers of the Victorian Era)

George Eliot was an English novelist, poet, journalist, as well as a translator. Her real name was Mary Ann Evans but she used a male pen name, as female authors were believed to be writing only lighthearted novels in those days and she wanted to be taken seriously as well as break that stereotype. She authored seven novels, known for their realism and psychological insight. Her books were mainly appreciated for their descriptions of rural society, and she believed that there was much interest and importance in the mundane details of ordinary country lives. She is best remembered for ‘Middlemarch’, which was not just her masterpiece, but also one of the greatest novels in the history of English fiction. She worked as a translator as well, which exposed her to various German religious, social and philosophical texts, elements of which shown up in her fiction. She was not religious, but she held the belief that religious beliefs and tradition maintained a social order and morality. Eliot has been placed by literary critic Harold Bloom as one of the greatest writers of the West. Her books have also been adapted into various films and television programs. Milo Yiannopoulos
DID WE MISS SOMEONE?
CLICK HERE AND TELL US
WE'LL MAKE SURE
THEY'RE HERE A.S.A.P
Quick Facts

British People
Novelists
Journalists
British Women
University Of London
Childhood & Early Life
George Eliot was born on 22 November 1819, Warwickshire, England. She was the second child of an estate manager Robert Evans and his second wife Christiana.
She studied together with her sister at several boarding schools. It developed a religious and self-repressive character in her, which dominated her up to the age of 20.
After her mother’s death and her brother’s marriage a few years later, she and her father moved to a house near Coventry. Shortly after, she started questioning her religious faith, which led to her father refusing to live with her, which forced her to go and live with her brother. Later, her brother and her friends arranged reconciliation, and she respectfully attended church till her father’s death in 1849.
Caring for her invalid father gave her satisfaction, but his death left her with a small income and no duties. After his funeral, she went to Switzerland and lived there for some time with her friends before returning to England to resume her career. 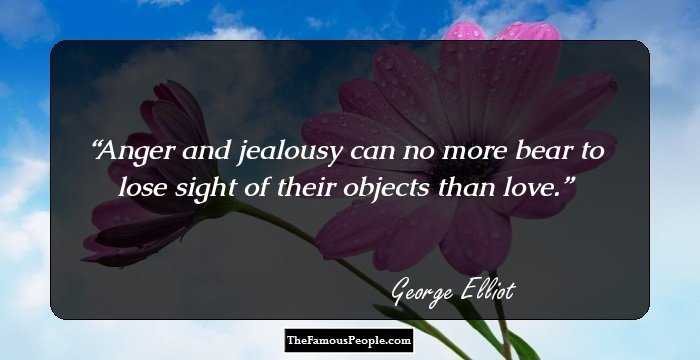 Quotes: Love
Continue Reading Below
Career
After her return to London in 1850, George Eliot wanted to become a writer. She joined ‘The Westminster Review’, a left wing journal in 1851. Though the official editor was John Chapman, it was Eliot who contributed to most of the work.
Her first complete novel ‘Adam Bede’ was published in 1859. Not only was it an instant success, but it also triggered response in the readers as they wanted to know who this George Eliot was, who possessed such a great intellect. Someone even pretended to be the author, which forced the real George Eliot, Mary Ann Evans, to come forward.
A year later, she wrote ‘The Mill on the Floss’, which was published in three volumes. The story mainly is about her estrangement from her brother Isaac.
She also wrote some of her best essays for ‘The Westminster’ as well as a few stories for ‘Blackwoods Magazine’.
George Eliot's greatest work ‘Middlemarch’ was started in 1869 and completed in 1871. It was first published in eight monthly installments in ‘Blackwood’s Magazine’. It is for this novel that she is remembered as the ‘The Victorian Sage’, which definitely was a remarkable achievement for a woman in nineteenth century Britain.
Her realism led her to create characters neither good nor evil, and characters that were loosely drawn. She usually let the reader make judgments about her characters and their motivations instead of letting the characters reveal themselves on their own.
After publication of her last novel ‘Daniel Deronda’ in 1876, her partner Lewes’ health started failing and he passed away two years later. Eliot spent the next two years of her life editing his final work ‘Life and Mind’. 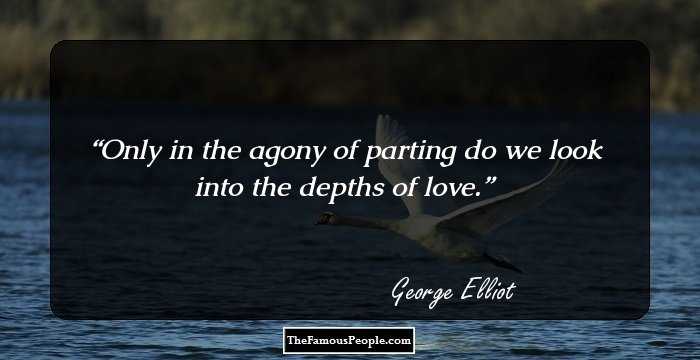 Quotes: Love
Major Works
George Eliot's first novel ‘Adam Bede’ was described by her as a country story ‘full of breath of cows and the scent of hay’. The book was not only rich in humor but was also popular because of its masterly realism. It was a combination of deep human sympathy and rigorous moral judgment.
Continue Reading Below
‘Middlemarch’, which is considered to be her best work, was first published in eight installments during 1871-1872. This novel pours light on several important themes such as the status of women, the nature of marriage, idealism, political reform, hypocrisy, self-interest, and religion. Evans started writing the two pieces that eventually formed ‘Middlemarch’ in the years 1869-1870. She completed the first one in 1871. Initially the reviews were mixed but now it is regarded as one of the greatest novels ever written in English.
Her last novel ‘Daniel Deronda’, which was written in eight parts, was built on the contrast between a poor girl and an upper class one. The keen analysis of the characters in this novel by Evans is appreciated by her critics.
Awards & Achievements
Her book ‘Middlemarch’, which was her best work, is regarded today was one of the best novels in English literature. 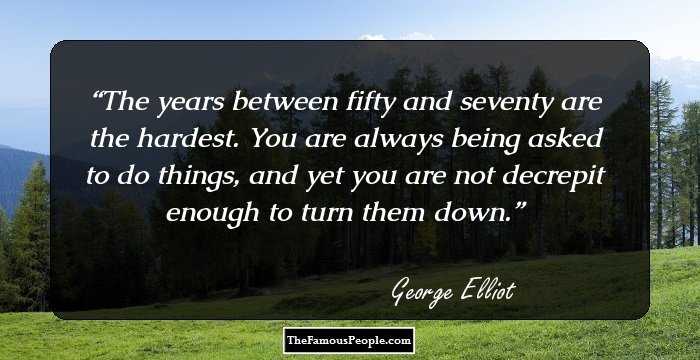 Personal Life & Legacy
George Eliot was romantically involved with George Henry Lewes, whom she first met in 1851. Lewes was already married, but since he and his wife were separated for some years, and even his wife was living with another man, they were able to continue their relationship.
Though it was not possible for Lewes to divorce his wife and formally get married to Evans, she started calling herself Mary Ann Evans Lewes, and referred to Lewes as her husband. Extra-marital affairs were not uncommon at that time in Victorian society, but the public admission of the relationship earned them the moral disapproval of the English society.
Later in 1880, two years after the death of Lewes, she married John Cross, a man who was twenty years younger to her, and changed her name to Mary Anne Cross. Though this caused controversy once more in her life, her brother was pleased because they had a legal marriage, and congratulated her.
A few months after her second marriage, Evans fell ill with a throat infection, which combined with the kidney diseases she had been having for years, led to her death on 22 December, 1880. She was 61.
Trivia
Since women writers were quite uncommon that time, her role as an editor was seen as quite unusual by most people.
Before her relationship with George Lewes, she had several embarrassing, unreciprocated attachments, including one with John Chapman and another one with Herbert Spencer.
Recommended Lists:
Writers #102
Media Personalities #195

Quotes By George Eliot | Quote Of The Day | Top 100 Quotes

See the events in life of George Eliot in Chronological Order