Born In: Comber, County Down, Ireland

Thomas Andrews was a British businessman and shipbuilder. He was the chief designer of several vessels made by the Irish shipbuilding company Harland and Wolff located in Belfast, including 'RMS Titanic', and was on board the ship when it sank after hitting an iceberg in April 1912 during its maiden voyage across the Atlantic. He had boarded the ship with his 'Guarantee Group' to provide technical support to the crew on its first journey and is remembered for playing a crucial role in saving hundreds of people before the ship eventually sank. A naval architect, he preferred to refer to himself as a shipbuilder or Director. He was the managing director and head of the drafting department of Harland and Wolff, where he rose up the ranks with sheer hard work. Born In: Comber, County Down, Ireland 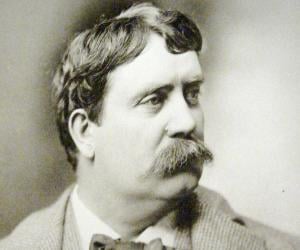 Irish Celebrities
Aquarius Men
Childhood & Early Life
Thomas Andrews, Jr. was born on February 7, 1873, at Ardara House, Comber, County Down, in Northern Ireland, to The Rt. Hon. Thomas Andrews and Eliza Pirrie. His father was a member of the Privy Council of Ireland, and his maternal uncle, Viscount William Pirrie, was the principal owner of the shipbuilding company Harland and Wolff.
He had three brothers and a sister: John Miller Andrews, who became the Prime Minister of Northern Ireland, Sir James Andrews, who became the Lord Chief Justice of Northern Ireland, Nina and William Andrews. He was educated at home by a private tutor up until 11 years of age, and began attending Royal Belfast Academical Institution in 1884.
In September 1889, at the age 16, he left the institution and began his premium apprenticeship at the shipyard of Harland and Wolff, for which his parents paid 100 guineas. Despite his uncle partially owning the company, he started from ground up and also studied technical design at Belfast College of Technology by night.
Continue Reading Below
You May Like

Who Is The Most Popular BTS Member?
Career
At Harland and Wolff, Thomas Andrews spent the first three months in the joiners' shop and an extra month in the cabinetmakers' before moving on to work on the ships for two months. His apprenticeship lasted for five years, the last one-and-half of which he spent in the drawing office.
During the 1890s, he was the head of the repair department and was involved in the construction of several vessels including 'RMS Oceanic' and 'RMS Baltic'. He was hardworking and popular within the company, and rose up the ranks to become the manager of construction works in 1901. In 1901, he also became a member of the Institution of Naval Architects.
Thomas Andrews gained widespread reputation after contributing significantly to the repairing of White Star Line's wrecked 'SS Suevic', which had its bow section so badly damaged that it could not be brought to Belfast for repair. He supervised the construction of the bow in Belfast, following which it was towed to Southampton where the ship was harbored.
Known for his innovative designs, he became the managing director and the chief of the drafting department at Harland and Wolff in 1907. That year, White Star Line decided to build three grand ships under the Olympic Class Liners named Olympic, Britannic and Titanic, for all of which he served as the chief designer.
Andrews worked with his uncle William Pirrie and general manager Alexander Carlisle for the design of 'RMS Olympic' and its sister ship 'RMS Titanic'; the construction of the ships began construction in 1907 and 1909, respectively. He ran thorough checks of both the ships to ensure quality and had suggested a double hull, watertight bulkheads and 46 lifeboats on Titanic, which were ultimately ignored.
Aboard Titanic
Thomas Andrews was the head of the 'Guarantee Group' which did quality checks of the ships during their maiden voyages, and had sailed with ships he had built earlier, including 'Adriatic', 'Oceanic' and 'Olympic'. He did the same with 'Titanic', and along with his group of engineers and mechanics, he travelled to Southampton to board the ship on its maiden journey to America on April 10, 1912.
Throughout the journey, he continued to take notes about possible cosmetic improvements and was in his cabin perusing the blueprints when the Titanic hit an iceberg at 11:40 PM on April 14th. He hardly noticed the collision and learnt about the accident after the ship's captain Edward J. Smith sent a message summoning him to the bridge to examine the damage.
He personally inspected the affected section of the vessel and discussed other reports on the damage with the captain, finally coming to the conclusion that the ship drowning was a 'mathematical certainty'. It was well past 12 when he predicted that the ship had about an hour left and also notified the captain that the 20 lifeboats on the ship were not enough to save all aboard.
He subsequently played a major role in the evacuation of Titanic and went from cabin to cabin urging passengers to wear their lifebelts and move to the deck to embark on the boats. Many people were unaware of the severity of the damage or the urgency of the situation, while Andrews tried his best to make sure that the limited lifeboat capacity was filled to the full.
He reportedly spent some time in the first-class smoking room staring at the 'Plymouth Harbour' painting, before again helping in the evacuation, and possibly left the ship at the last moment. He was one of over 1500 people that died that night among the estimated 2,224 passengers and crew onboard, but his body, if recovered, could not be identified.
Family Life & Legacy
On June 24, 1908, Thomas Andrews married Helen Reilly Barbour, the daughter of textile industrialist John Doherty Barbour and the sister of Sir John Milne Barbour. They lived at Dunallan, 20 Windsor Avenue, Belfast, and welcomed daughter Elizabeth Law Barbour Andrews, known as Elba by her initials, on November 27, 1910.
He had reportedly taken his pregnant wife onboard 'RMS Titanic' one night in 1910 when it was still being built. His wife remarried after his death, and his young daughter attended the opening ceremony of the Thomas Andrews Jr. Memorial Hall in his hometown in 1914.
Several survivors of the disaster later recounted how heroically and selflessly he had persuaded the women and children aboard Titanic to enter lifeboats despite lack of enough space for everyone. Realizing that his memorable deeds should be recorded, Sir Horace Plunkett, a member of Parliament, had requested writer Shan Bullock to write the biography 'Thomas Andrews, Shipbuilder', which was released within a year.
Several films, television series, documentaries and plays have been made on the Titanic disaster over the century, including 'A Night to Remember', 'S.O.S. Titanic', 'Titanic' and 'Ghosts of the Abyss'. Among the several ships he had constructed, the last surviving one, 'SS Nomadic', is on display in Belfast in his honor, while the asteroid 245158 Thomasandrews was named after him in 2004.
Trivia
During his early years, Thomas Andrews was interested in horses, bee-keeping, boating, and playing cricket, and played for the North Down Cricket Club in Comber. The Andrews family had donated the ground in which the cricket club continues to play till this day.
You May Like

See the events in life of Thomas Andrews in Chronological Order