Everett McKinley Dirksen was an American politician. He was a Republican member of the ‘U.S. House of Representatives’ representing Illinois. He also represented Illinois as a U.S. Senator. His oratorical style earned him the name ‘The Wizard of Ooze’. He was a civil rights champion and aided in writing and passing of the Civil Rights act of 1964 and of 1968. He was instrumental in passing the Voting Rights Act of 1965. He played a key role in the political scenario during his decade long stint as the Senate Minority Leader. His presence of mind and wit enabled him to negotiate successfully with fellow Senators and was endeared by his countrymen. He staunchly supported the Vietnam War at the Senate. Dirksen won the Grammy Award in the category of best documentary for his album ‘Gallant Men’. He was a Freemason and a member of Pekin Lodge #29. He appeared on TV in different games and variety shows including ‘The Hollywood Palace’, ‘The Red Skeleton Show’ and ‘What’s My Line’. He made appearances in various movies including a cameo in the film ‘The Monitors’. John F. Kennedy
Political Leaders #1658
Leaders #2178
Continue Reading Below
DID WE MISS SOMEONE?
CLICK HERE AND TELL US
WE'LL MAKE SURE
THEY'RE HERE A.S.A.P
Quick Facts

American Celebrities
University Of Minnesota
Male Leaders
Capricorn Leaders
American Leaders
Childhood & Early Life
Everett McKinley Dirksen was born on January 4, 1896, in Pekin, Illinois, to Johann Friedrich Dirksen and Antje Dirksen as one of their twin sons.
His father died when he was nine years old. His mother purchased a small farm in ‘Beantown’ within the city limits to support the family.
After studying in local schools he enrolled in the ‘University of Minnesota Law School’. He left the law school in-between to join the U.S. Army during World War I. He served in a field artillery battery as a second lieutenant.
He remained a member of the ‘Reformed Church in America’ founded by Dutch immigrants in the 18th century.
At the end of the war he tried his hands at an electrical washing machine business but was unsuccessful. Later, he ran a bakery with his brothers.
Since childhood he was encouraged by his mother into reading. His artistic bent of mind was first reflected in a series of unpublished short stories he wrote. He also wrote plays along with Hubert Ropp, his former classmate. 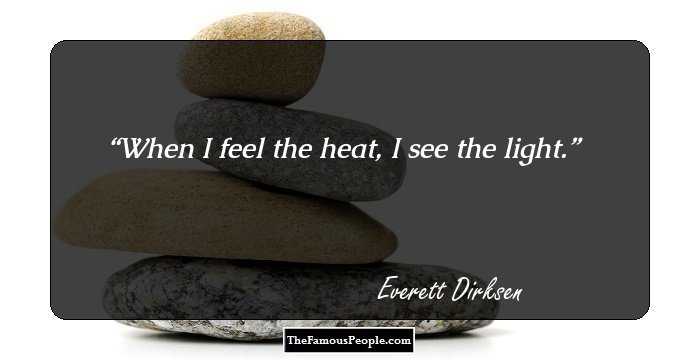 The Hottest Male Celebrities With The Best Abs
Career
In 1927, he began his political career as the finance commissioner of Pekin after being elected to the Pekin City Council.
He lost the Republican primary in 1930. In 1932 he won the congressional seat and thereafter was re-elected seven times. He was a realistic and moderate Republican who advocated for several New Deal programs. The Senate and House committees often used executive branch personnel for legislative work. To stop this practice, Everett McKinley Dirksen successfully lobbied for expanding congressional staff.
He was successful in passing an amendment of the ‘Lend-Lease’ bill by initiating a resolution. The amendment stated that the power of the President can be revoked by the House and the Senate when a concurrent resolution is passed by a simple majority.
In 1948, he refused to run for re-election due to his eye ailment. He made a comeback in politics after two years in 1950 and was elected as an U.S. Senator from Illinois. He became a prominent Senator and earned nationwide reputation as an astute, convincing and pragmatic political leader and orator.
In 1952, he supported the presidential candidacy of Robert A. Taft, a fellow Republican Senator from Ohio. He opposed presidential candidacy of General Dwight Eisenhower and spoke vehemently against his supporter Thomas E. Dewey, the then Governor of New York.
In 1959, he became the Senate Minority Leader defeating John Sherman Cooper, a Senator from Kentucky. He was successful in unifying different factions of the Republican Party by allowing more representation of young Republicans in the Senate.
The 1960s saw him as one of the official voice of the Republicans along with Charles Halleck and Gerald Ford.
On economic issues, his voting record consistently remained conservative. He supported internationalism of Republican President Eisenhower and Democratic President John F. Kennedy, reversing from his earlier stand of isolationism.
He firmly advocated the Vietnam War and strongly supported Democratic President Lyndon B. Johnson both publicly and in the caucus of the Republican Party.
Continue Reading Below
In 1964, the Southern Democratic Senators acted as filibusterers for fifty-four days impeding the passing of the Civil Rights Act of 1964. A substitution bill was introduced by him along with Senators Mike Mansfield, Thomas Kuchel and Hubert Humprey. After a few amendments the substitute bill was finally passed in the Senate and adopted by the House-Senate conference committee.
He played a vital role in passing of the Voting Rights Act of 1965.
A constitutional amendment was initiated by him on March 22, 1966 that permitted administrators of public schools to provide for structured prayer by students. The amendment was defeated in the Senate as opponents felt this would infringe the principle of separation of church and state.
In 1968, he won his last election as the Senate Minority Leader and held the position until his death. During this tenure he helped in writing and passing of the Civil Rights act of 1968.
He recorded four albums one of which was the ‘Gallant Men’, released in 1967. He voiced his own poems in the album which later won him a Grammy Award in 1968 in the category of ‘Best Documentary Recording’.
Personal Life & Legacy
In 1927, he married Louella Carver. The only daughter of the couple, Joy married Senator Howard Baker.
Everett McKinley Dirksen suffered from lung cancer and underwent a right upper lobectomy. On September 7, 1969, he succumbed to cardiopulmonary arrest. He was buried at the ‘Glendale Memorial Gardens’ besides the remains of his wife.
Trivia
A Senate building was renamed as ‘Dirksen Senate Office Building’ in 1972 in his honour.
The federal building of ‘United States District Court for the Northern District of Illinois’ was named after him.
A parkway in Illinois’s Springfield was named after him.
He was very fond of the common marigold and often used to lighten the tense atmosphere of political discussions by suggesting that marigold be named as the national flower. From 1972, Perkin, his hometown holds an annual ‘Marigold Festival’ and the town is now renowned as the ‘Marigold Capital of the World’.
You May Like

See the events in life of Everett Dirksen in Chronological Order