Gene Roddenberry was an American Television screenwriter and producer, who is universally renowned for creating and conceptualizing the futuristic science-fiction show ‘Star Trek’. Throughout his career, whatever Roddenberry pursued was driven by his passions, whether it was volunteering for the ‘United States Army Air Corps’, joining Pan Am as a pilot or moving to Los Angeles to fulfil his writing ambitions. Initially, he achieved a modicum of recognition as a writer by writing for shows like ‘Highway Patrol’ and ‘Have Gun – Will Travel’. But his big break arrived with the inception of ‘Star Trek’, which became so much more than just a TV show. He did not let the producers bring in any changes which was contradictory to his vision. Although, it initially received mixed response from viewers, its re-runs and syndication garnered extremely positive responses and also earned the show a devout fan-following. The show’s success, along with his papers and lectures on related topics enhanced his reputation as a futurist and a visionary. He worked for many more films and TV shows, but none could match the acclaim he received for ‘Star Trek’. As the ‘Star Trek’ franchise continues its success story, Roddenberry will always be remembered as the one who created the concepts and the characters that have been universally celebrated. Nick Name: The Great Bird of the Galaxy 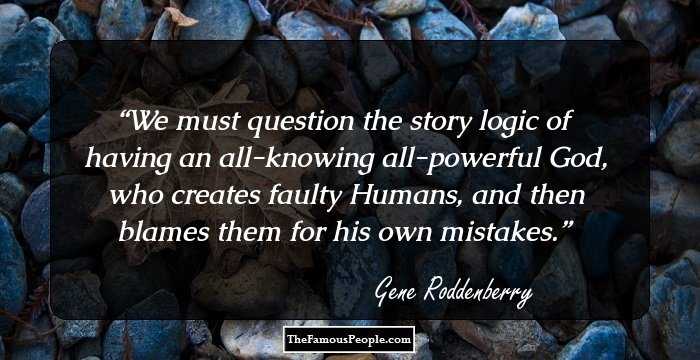 Quotes: God
Continue Reading Below
Career
In 1941, he volunteered for the United States Army Air Corps and after completing his training, flew the B-17 bombers in World War II as a ‘Second Lieutenant’. During this time, he began writing, publishing stories for aeronautical magazines and poetry for various journals.
During the war, he was part of several missions and after the war ended, he was honourably discharged from the rank of Captain in 1945.
He next joined the Pan American World Airways and worked for four years as a pilot. In this period, he pursued his writing interests by taking writing courses from ‘Miami University’ and later from ‘Columbia University School of General Studies’.
In 1949, he quit his pilot job and went to Los Angeles to pursue Television writing. To support his family, he joined the ‘Los Angeles Police Department’, where he worked as a spokesperson and speechwriter. He was actively involved in writing for the TV series ‘Dragnet’, which portrayed the cases of police officers in LAPD.
During his tenure in LAPD, he pursued his writing ambitions and started writing for shows such as ‘Mr. District Attorney’, ‘Goodyear Theatre’, ‘Naked City’, ‘The Kaiser Aluminium Hour’, ‘Four Star Theater’, etc.
In 1956, he resigned from LAPD and started writing full-time as a freelance writer. He wrote for some TV shows like ‘Highway Patrol’, ‘Have Gun – Will Travel’ and ‘Whiplash’. But, he became discontented and began to write new concepts and ideas for television instead, many of which never made it to the screen.
In 1964, he developed a series ‘Star Trek’, a futuristic science-fiction show that chronicles the adventures of a mixed group of humans and aliens, also depicting the prevailing issues of time. ‘Desilu Studios’ agreed to produce the show and two years later, it started airing on Television.
‘Star Trek’ aired for 3 seasons from 1966 to 1969, in which Roddenberry worked as writer for two seasons, after which it was cancelled due to low ratings. However, the series became popular later through re-runs and syndication, winning numerous honours and also acquiring a very dedicated fan-following.
After ‘Star Trek’, he wrote the screenplay for the 1971 mystery film ‘Pretty Maids All in a Row’, which he also produced.
Continue Reading Below
From 1973 to 1974, he wrote and produced the television films ‘Genesis II’, ‘Planet Earth’, ‘The Questor Tapes’ and ‘Spectre’, none of which achieved major success. He was also involved as a ‘Writer’ and ‘Executive Consultant’ in ‘Star Trek: The Animated Series’.
An idea for another ‘Star Trek’ series was mooted and eventually a full-length film was made with the title ‘Star Trek: The Motion Picture’, which was released in 1979. Helped by the franchise’s already existing popularity, the film was a commercial hit, grossing $139 million at the box-office worldwide.
He also wrote a novel based on the film, which was a bestseller and sold almost a million copies.
In 1980, his role in ‘Star Trek’ became less central and he was designated as ‘Executive Producer’. He continued his involvement with the next five ‘Star Trek’ sequels too.
In 1987, the next instalment in the ‘Star Trek’ series, ‘Star Trek: The Next Generation’ was a great success, both critically and commercially. 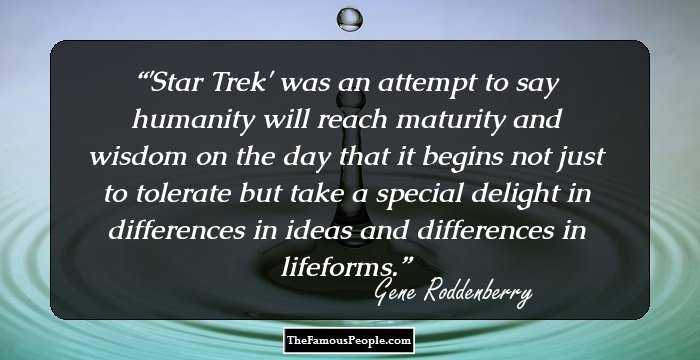 Quotes: Will
Major Works
Gene Roddenberry is the creator and writer of the pioneering science-fiction series ‘Star Trek’. Its concept and characters have been used in numerous sequels and films released over the years. Its characters have also featured in animated films, video games, parodies and merchandise.
Awards & Achievements
In the course of his work in the United States Army Air Corps as a pilot of the B-17 bombers, he flew eighty-nine missions. He was presented with ‘The Distinguished Flying Cross’ and the ‘Air Medal’ for his achievements.
In 1967, Roddenberry won a ‘Hugo Award’ in the category ‘Best Dramatic Presentation’ for the episode ‘The Menagerie’ from the series ‘Star Trek’.
In 1986, he was presented with a star on the esteemed ‘Hollywood Walk of Fame’ and became only the first writer to be honoured this way. 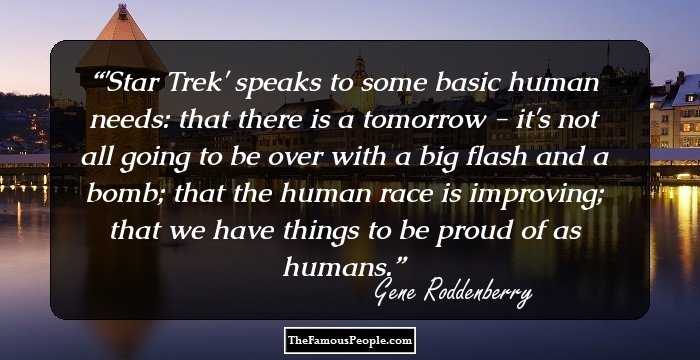 Personal Life & Legacy
Roddenberry married Eileen Rexroat in 1942 and had two daughters with her, Darleen and Dawn. Due to his extra-marital affairs, the marriage ended in divorce after twenty-seven years.
He had romantic relationships with actresses Nichelle Nichols and Majel Barrett, whom he eventually married in 1969 in Japan. He has one child from this marriage, named ‘Eugene Wesley Roddenberry, Jr’.
Trivia:
This famous screenwriter of ‘Star Trek’ fame had a narrow escape as an infant, when his house caught fire. He and his family were saved by the timely intervention of a milkman.
After his death, the ashes of this famous screenwriter were launched into space on two occasions, as a mark of respect for his accomplishments.

Quotes By Gene Roddenberry | Quote Of The Day | Top 100 Quotes

See the events in life of Gene Roddenberry in Chronological Order