(Zoologist & Evolutionist Who Was a Strong Proponent of 'Darwinism')

Ernst Haeckel was a renowned German biologist, naturalist, physician, philosopher and artist who identified many new species of living beings and gave names to thousands of them. He traced a genealogical tree of all life forms and came up with new terms in biology such as phylogeny, anthropogeny, the kingdom Protista, phylum, stem cell, and ecology. He publicized Darwin’s theory by producing his work in German language. He presented his recapitulation theory- ‘ontogeny recapitulates phylogeny’ in German, which became controversial subject during his time. Haeckel was also the first to regard psychology as a branch of physiology. Although he contributed much to the theory of evolution, he was best remembered for his extensive work on radiolarian. Haeckel’s book ‘Die systematische Phylogenie’ or ‘Systematic Phylogeny’ which he published in 1894 was regarded as his best work. In 1907, Haeckel was honored with the title of Excellency by Kaiser Wilhelm II; and in 1908, he was awarded the Darwin-Wallace Medal by the Linnean Society of London. Apart from his research activities, Haeckel had also gained the reputation of being a great patron of art. The illustrations in his books spoke volumes of his creativity and his inclination towards paintings. Max Stirner
DID WE MISS SOMEONE?
CLICK HERE AND TELL US
WE'LL MAKE SURE
THEY'RE HERE A.S.A.P
Quick Facts

German Celebrities
Philosophers
German Men
University Of Jena
Male Scientists
Childhood & Early Life
Ernst Haeckel was born on 16 February 1834, in Potsdam, Germany. His father was a government official who worked at Merseburg. Haeckel did his schooling from Cathedral high school at Merseburg.
His parents wanted Haeckel to pursue medicine and the obedient son that he was, Ernst went to the renowned ‘University Of Berlin’ to pursue a degree in medicine. He graduated from this esteemed institution in 1857 and earned a doctorate in medicine (M.D) degree in the same year. Soon after, Haeckel began his career as a doctor 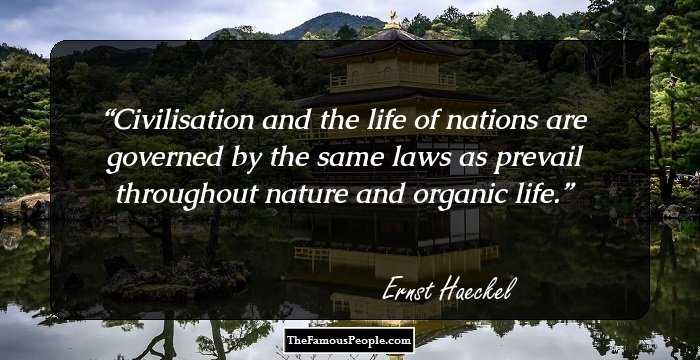 Quotes: Life, Nature
Continue Reading Below
Career
Ernst Haeckel happened to read the legendary Charles Darwin’s famous book ‘Origin Of Species’, in 1859. The work influenced Haeckel heavily and motivated the young biologist to dedicate himself to research.
After a brief stint as a doctor, he decided to study further and joined the ‘University of Jena’. Under the tutelage of the great German anatomist Karl Gegenbaur, Ernst Haeckel bagged a doctorate in Zoology.
The University of Jena very much became an integral part of his life and he worked as a professor of comparative anatomy at the University for more than four decades.
During the period 1859-1866, Haeckel was engrossed in studies related to organisms such as Annelids and Poriferans. Eventually, he went on to identify several organisms and even coin many famous words of biology that we know today. ‘Ecology’, ‘Phylum’ and ‘Protista’ are a few of the jargon that came into existence due to Ernst Haeckel.
According to a few sources, he had compiled his findings on Radiolarians in a book consisting of illustrations and even sent a copy to his idol Charles Darwin. Apparently, Darwin was pleased by the work and acknowledged it by writing a letter to Haeckel, in praise of the latter’s passion towards biology.
1866-67 was an eventful period in his life, all thanks to his trip to Canary Islands, situated in Spain. He happened to meet his idol Charles Darwin during this trip. He also interacted with other renowned biologists such as Thomas Huxley and Charles Lyell.
In a matter of five years, ranging from 1869 to 1873, Haeckel travelled to several nations such as Norway, Croatia, Egypt, Greece and Turkey for his research.
Another famous claim of Ernst Haeckel, which grabbed the world’s attention, was his opinion on human evolution. According to him, humans evolved from apes and that the evidences of this drastic change can be found in Indonesia.
Another important observation of Haeckel that can’t be ignored is the link between Ontogeny and Phylogeny. While Ontogeny refers to the process of an organism’s development from the stage of an egg, Phylogeny is the study of evolutionary changes among organisms. Phylogeny also compares different biological species as well as their similarities and dissimilarities.
Continue Reading Below
He also grabbed attention for the wrong reasons, apart from his path-breaking findings. It was alleged that during his time at the University of Jena, he indulged in fraudulent practice but there had been no substantial evidence to back this claim.
Major Works
One of the reasons why Ernst Haeckel is popular worldwide is his ‘Recapitulation Theory’. Also famously known as the ‘biogenetic law’ among many, this theory was Ernst’s attempt to understand the similarities between humans and animals. This famous claim of his received mixed reviews. While some of them hailed his inference, a few rubbished the ‘Recapitulation Theory’ and criticized the biologist and his findings.
Awards & Achievements
Ernst Haeckel was felicitated with the Darwin Wallace medal in 1908 for his immense contribution towards science.
The famous German emperor Wilhelm II too had recognized Haeckel’s contribution and honoured him with the prestigious Title of Excellency.
Personal Life & Legacy
Apart from his biological research, Ernst Haeckel was also quite fond of paintings. In his book ‘Kunstformen der Natur’, (which translates to ‘Art Forms Of Nature’), he had described several microorganisms using colourful illustrations, which managed to captivate the readers.
It is believed that Ernst Haeckel, along with his parents, had visited the town of Napoli, situated in Italy, when he was around 25. It was here that the biologist also discovered his love for art.
Ernst Haeckel was twice married but not much is known his first wife. The name of his second wife was Agnes and she passed away in the year 1915.
Haeckel’s health apparently deteriorated after the demise of Agnes. He also suffered from several injuries at this time. Just three years after the death of his beloved wife, Ernst Haeckel offered his residence to the famous ‘Carl Zeiss Foundation’.
He died on 9 August 1919, at the age of 85, in Jena, Germany.
A summit in Eastern Nevada, has been named ‘Mount Haeckel’ in his honour. This mountain is approximately 13, 418m in height.
Trivia
It is widely believed that Ernst Haeckel was one of the first few people who popularized the phrase ‘First World War’
Recommended Lists:
Scientists #254
Intellectuals & Academics #334

See the events in life of Ernst Haeckel in Chronological Order