Konrad Zacharias Lorenz was an Austrian scientist who specialised in zoology and ornithology; however he made his biggest contribution in the field of ethology and is regarded as the founding father of this particular branch of science. Ever since he was a child, Zacharias was attracted towards animals and keenly observed them. Such was his love for animals that during his student years he developed a large collection of exotic fauna. He started his career as an academic but his scientific pursuits were interrupted by the World War II. Inducted into the German Army as a psychologist, he witnessed the cruelties inflicted by the Nazi soldiers on the prisoners and harboured a deep regret for having served for their horrific cause. Lorenz made path breaking discoveries in zoology, ornithology and ethology throughout his long career, as one of the leading scientist of the world. He won plenty of accolades and award in his life due to the outstanding contributions that he had made to the world of science. It would not be an exaggeration by any stretch of imagination that Konrad Lorenz is a scientist who belongs in the pantheon of the greatest scientists that the world has ever seen. Read on to know more about his life and works Ernst Mayr
DID WE MISS SOMEONE?
CLICK HERE AND TELL US
WE'LL MAKE SURE
THEY'RE HERE A.S.A.P
Quick Facts 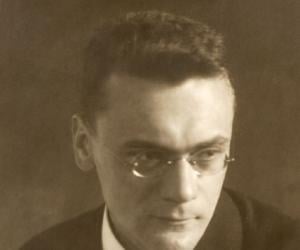 Austrian Celebrities
Ornithologists
Austrian Men
Columbia College
University Of Vienna
Childhood & Early Life
Konrad Lorenz was born in Vienna on November 7, 1903 to Adolf Lorenz and his wife. His father Adolf was a physician and according to Konrad he was extremely supportive of his interest in animals from a very early age.
He finished his high school education in the year 1922 and his father sent him to the famous ‘Columbia University’ in the US but within a year Lorenz abandoned the institution and continued further studies at the ‘University of Vienna’ in his hometown.
In the year 1928, he was awarded the Doctor of Medicine degree by the ‘University of Vienna’ and immediately thereafter he was hired as an assistant professor at the well-known ‘Institute of Anatomy’.
The scholar was awarded the doctorate in zoology in the year 1933 and it is said that during that time he used to keep plenty of animals in his house in order to make sure that he could learn as much as he could about animals. 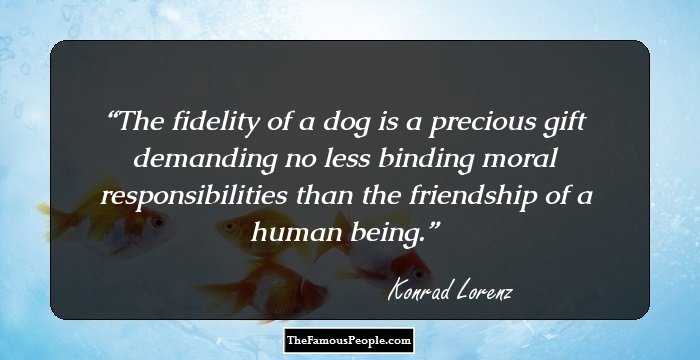 Continue Reading Below
Career
In the year 1940, Konrad was appointed as a professor of Psychology in the ‘University of Konigsberg’ following his studies on animal behaviour; however the very next year he was drafted into the German Army as a psychologist.
He was captured by the Russians and had to spend time as a prisoner of war between the years 1944 and 1948. However, he continued with his own studies as much as he could.
In the year 1949, he was made the head of the ‘Institute of Comparative Ethology’ in the city of Altenburg and during that time he was also involved in setting up the ‘Max Planck Institute of Buldern’, Westphalia the next year.
He served as the head of the ‘Max Planck Institute of Behaviour Physiology’ between the years 1963 and 1973. He made some of the most remarkable discoveries on ethology during this particular time.
Lorenz worked with two close associates Frisch and Timbergen, throughout the 1960s and early 1970s, on the behavioural patterns of animals.
In the year 1974 he was made the director of animal sociology department at the ‘Institute for Comparative Ethology’ of the ‘Austrian Academy of Sciences’ situated in Altenberg. 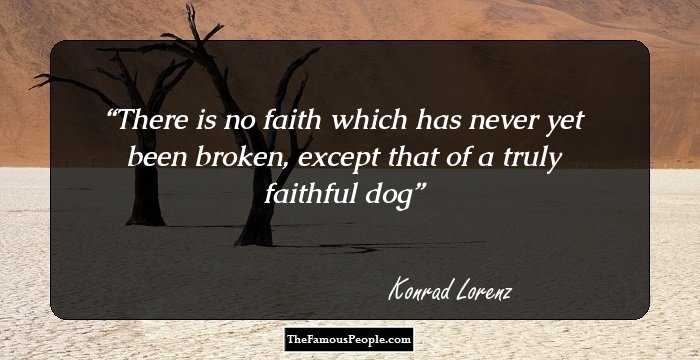 Quotes: Never
Major Works
In the year 1963 he published the popular book ‘On Aggression’ that dealt with the behavioural patterns of human beings as a social animal. In the book, the pioneering ethologist argued that men might be born with overtly aggressive tendencies but it could be reined in if he gets the right environment growing up.
In 1973, his most popular book ‘Behind the Mirror: A Search For the Natural History of Human Knowledge’ was published and it went on to become one of the most authoritative text on the subject.
Awards & Achievements
The ‘Kalinga Foundation Trust’ in India awarded this erudite scientist with the ‘Kalinga Prize’ in 1969. The prize is given to anyone who makes science easy to comprehend for the common man and in that regard he was certainly a stalwart.
In the year 1973, Konrad was awarded the Nobel Prize in Medicine along with Nikolaas Tinbergen and Karl von Frisch for the path breaking studies and inferences in behavioural patterns of animals. 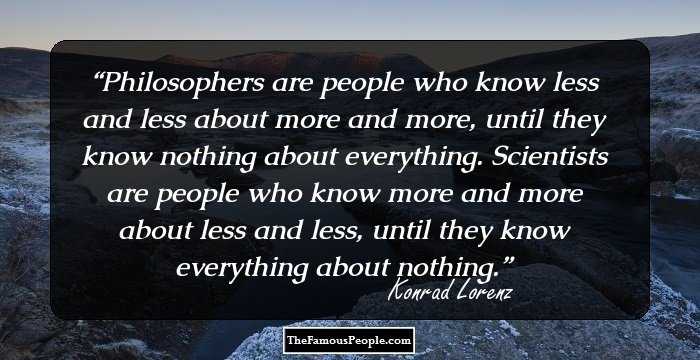 Personal Life & Legacy
The accomplished ornithologist was married to Margarethe Gebhardt since the year 1927 and the couple had three children- two daughters and a son.
The world saw the last of this eminent scientist on February 27, 1989, when he died due to kidney failure in Altenberg.
His findings on behavioural sciences are studied in universities across the world and are still used for practical purposes by researchers.
Trivia
This eminent scientist said that he comprehended the ‘complete inhumanity of the Nazis’ when he first visited the Poznan concentration camp, during his time as a psychiatrist for the German Army, during the World War II.

Quotes By Konrad Lorenz | Quote Of The Day | Top 100 Quotes

See the events in life of Konrad Lorenz in Chronological Order