Erik Homburger Erikson was a German-born American developmental psychologist and psychoanalyst who pioneered in the world of child psychology by giving his development theory with his ‘eight psychosocial stages’. He was born in Frankfurt in unusual circumstances in which his mother did not conceive him through her husband but he never got to know who his biological father was. It is said that the history of his birth is something that triggered the need in him to pursue the concept of identity and it is how he gave the world the psychological term ‘identity crisis’, a major contribution to the world of psychology and psychoanalysis. He grew up in Germany and came in contact with the world of psychoanalysis when he met Sigmund Freud’s daughter Anna Freud. He studied psychoanalysis at the Vienna Psychoanalytic Institute but Nazi invasion of Germany led to his emigration to America. In America, Erikson found a wide scope to practice psychoanalysis on children in Boston and worked at various medical institutes, including the Harvard University and California University. He studied the psychology of children from various social structures, environments, emotional and psychological issues and compiled his observations in the most prominent book of his career, ‘Childhood and Society’. American Celebrities
German Celebrities
German Men
Male Psychologists
German Psychologists
American Psychologists
Childhood & Early Life
Erik Erikson was born in Frankfurt, Germany to Karla Abrahamsen and Waldemar Isidor Salomonsen, who was a Jewish stockbroker. He was born to his mother under the circumstances where his mother had not seen his father for several months.
He was registered as Erik Salomonsen at birth and there is no information available about his biological father. Shortly after he was born, his mother moved to Karlsruhe to become a nurse and got remarried to a pediatrician, Theodor Homburger.
In 1911, Erickson was officially adopted by his stepfather, Theodor Homburger and he became Erik Homburger. The story of his birth was kept from him for a long time and he grew up not knowing who his real father was. 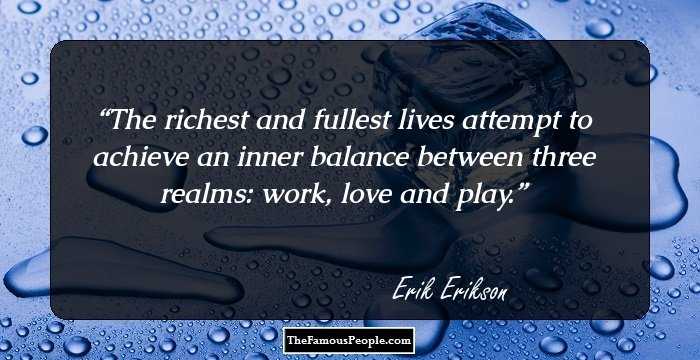 Who Is The Most Popular BTS Member?
Career
Erikson was a teacher at a private school in Vienna where he became friends with the daughter of Sigmund Freud, Anna Freud. She got him interested in psychoanalysis and he got trained in the science at the Vienna Psychoanalytic Institute.
In 1933, while Erikson was being trained in psychoanalysis, Nazis took over Germany and he had to leave the country. He first moved to Denmark and then emigrated to States where he became the first child psychoanalyst in Boston.
After working in Boston for some time, Erikson worked at various positions in various institutes like, Massachusetts General Hospital, the Judge Baker Guidance Center, Harvard Medical School and Psychological Clinic, etc.
In 1936, Erikson joined Harvard University and worked at the Institute of Human Relations, while teaching at the Medical School. Side by side, he was also studying a set of children on a Sioux reservation in South Dakota.
Erikson left Harvard and joined the staff of the California University in 1937. He associated with the Institute of Child Welfare there and opened his private practice. He also devoted his time in studying the children of the Yurok tribe.
All of his observations of children of different environments and breeds led to compilation of the most famous book of his psychology career, ‘Childhood and Society’ in 1950. The book introduced the world to the concept of ‘identity crisis’.
After leaving the University of California, Erikson started working and teaching at the Austen Riggs Centre, which is a major psychiatric treatment facility in Stockbridge, Massachusetts. He got involved there in observing emotionally troubled young adolescents.
In 1960, he went back to Harvard University and took the position of professor of human development and worked until his retirement and after his formal retirement he wrote on various subjects of psychology along with his wife. 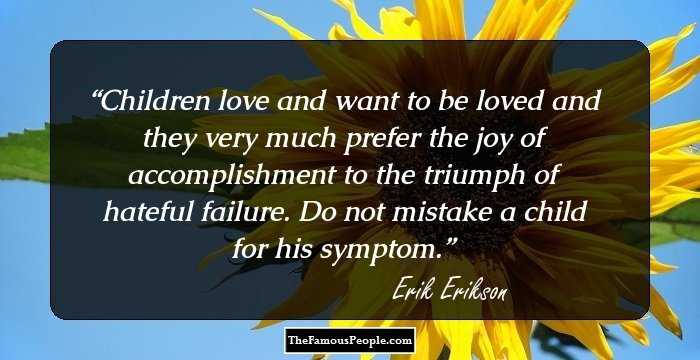 Quotes: Love, Children
Major Works
Erikson’s main contribution to psychology was his developmental theory. He professed that humans developed throughout their life span, which is explained in his eight psychosocial stages of development.
Awards & Achievements
In 1973, the National Endowment for the Humanities gave an opportunity to Erikson to lecture at the Jefferson Lecture, the United States' highest honor for achievement in the humanities. His lecture was called "Dimensions of a New Identity".
Erikson won a Pulitzer Prize for the contribution in the field of psychology through his writings and a U.S. National Book Award in category Philosophy and Religion for his book ‘Gandhi’s Truth (1969)’.
Personal Life & Legacy
Erikson married Joan Serson Erikson in 1930 and remained married to her until his death. They had 4 children together. His son, Kai T. Erikson is a prominent American sociologist.
Trivia
Erikson was teased for being a Nordic at the Jewish school and at grammar school, they teased him for being Jewish.
You May Like

See the events in life of Erik Erikson in Chronological Order