Erich Maria Remarque was a German writer. He started writing his first novel “The Dream Room” at the age of 16. During World War I, he was wounded by shrapnel, and sent to an army hospital in Germany where he spent the rest of the war. He then held various jobs including teacher, librarian, businessman, journalist and editor. He shot to prominence with his novel, “All Quiet on the Western Front” (“Im Westen nichts Neues”), which describes the experiences of German soldiers during World War I. His other novels include “The Road Back”, “Flotsam”, “Arch of Triumph” and “The Night in Lisbon” amongst others. He was persecuted in his own country on account of his writings, and fled to Switzerland. The German government arrested his sister, Elfriede Scholz, and beheaded her. The cost of her prosecution, imprisonment and execution was billed to her sister Erna. Remarque married actress Ilse Jutta Zambona, divorced her, and later remarried her when she faced the threat of being sent back to Germany. They moved to the US, and became naturalised citizens. He married actress Paulette Goddard after divorcing Ilse Zambona yet again. German Celebrities
German Men
Male Writers
Cancer Writers
German Writers
Childhood & Early Life
Erich Maria Remarque was born Erich Paul Remark on 22 June 1898, to Peter Franz Remark and Anna Maria Stallknecht belonging to a lower class family. His father was a licensed bookbinder and pressman.
He tried writing for the first time at the age of 16. His writings included essays, poems, and a novel, “The Dream Room” (“Die Traumbude”), that he finished writing and published in 1920. 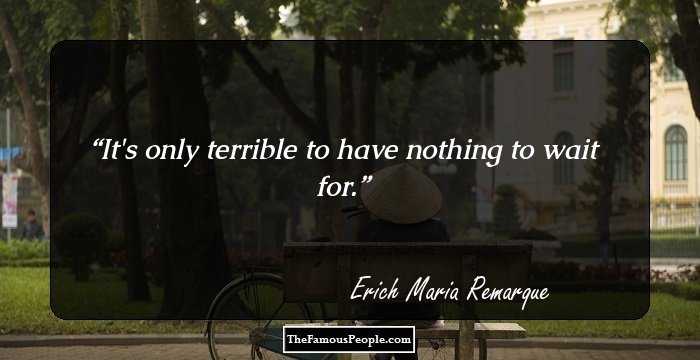 Famous Beautiful Women With Green Eyes
Career and Later Life
During World War I, Remarque was drafted into the army at the age of 18. On 12 June 1917, he was transferred to the Western Front, at Hem-Lenglet, and then was stationed between Torhout and Houthulst.
On 31 July 1917, he was wounded by shrapnel in the left leg, right arm and neck, and was sent to an army hospital in Germany where he spent the rest of the war.
He trained to become a teacher, and worked as a primary school teacher from August 1919. He ended his teaching stint, and tried different jobs including as a technical writer for Continental Rubber Company.
He changed his middle name from “Paul” to “Maria” in memory of his mother, and reverted to the family’s earlier spelling of “Remarque”. The Germans claimed that his real surname was Kramer - “Remark” spelled backwards.
Remarque wrote the 1927 “Station at the Horizon” (“Station am Horizont”), serialised in the sports journal “Sport im Bild” for which he was working. It was published in book form only after his death.
He wrote a number of works describing the wartime and the post-war years. In 1931, he finished “The Road Back” (“Der Weg zurück”). He then bought a villa in Porto Ronco, Switzerland.
In 1933, the German government banned and publicly burned Remarque's works. The Nazis denounced his work, and claimed that he was a descendant of French Jews. He left Germany to live in Switzerland.
Remarque's fourth novel, “Flotsam”, titled in German as “Liebe deinen Nächsten”, or “Love Thy Neighbour”, first appeared in a serialized form translated into English in Collier's magazine in 1939.
In 1943, the German government arrested his sister, Elfriede Scholz, charged of “undermining morale”, and beheaded her. The cost of her prosecution, imprisonment and execution was billed to her sister Erna.
Continue Reading Below
Remarque returned to Switzerland, where he spent the rest of his life. Four years later in 1952, his next work, “Spark of Life” (“Der Funke Leben”), appeared both in German and English.
His novel, “Zeit zu leben und Zeit zu sterben” was published first in English translation in 1954 with the title “A Time to Love and a Time to Die”.
In 1955, he wrote the screenplay for an Austrian film, “The Last Act” (“Der letzte Akt”), about Hitler's final days based on the book “Ten Days to Die” by Michael Musmanno.
He wrote the stage drama, “Full Circle” (“Die letzte Station”) in 1956, which played successfully in both Germany and on Broadway. An English translation was published 18 years later.
“Heaven Has No Favorites” was serialised as “Borrowed Life” in 1959. It also appeared as a book, and was made into the film “Bobby Deerfield”. 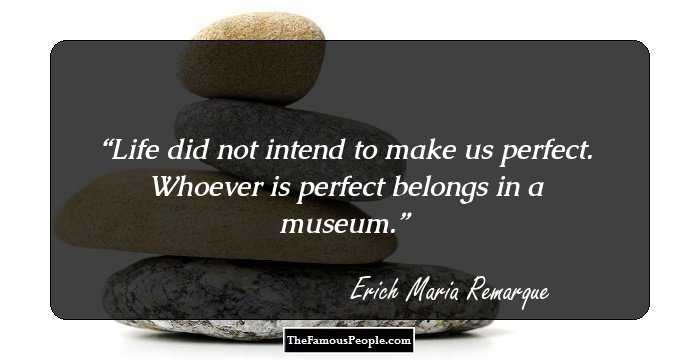 Quotes: Life
Major Works
His novel, “All Quiet on the Western Front” (Im Westen nichts Neues), was written in 1927, and published two years later. It describes the experiences of German soldiers during World War I.
His 1945 novel, “Arch of Triumph” was first published in English. The next year it was published in German as “Arc de Triomphe”. It was a best-seller, reaching worldwide sales of nearly five million.
“The Night in Lisbon” or “Die Nacht von Lissabon” was published in 1962. It was the last of his works. It sold some 900,000 copies in Germany, and was a modest best-seller abroad as well.
Continue Reading Below
Awards & Achievements
Remarque’s home town of Osnabrück wanted to present him the Julius Möser Medal, but he never returned to Germany. Finally a delegation visited him in Porto Ronco, and presented it in December 1963.
In 1967, he was awarded the Great Cross of Merit which is a class of the Bundesverdienstkreuz. It is the only Order of Merit that Germany currently awards. 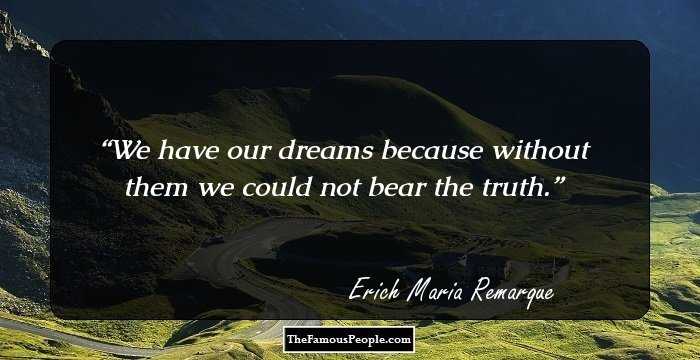 Quotes: Dreams
Personal Life & Legacy
Remarque married actress Ilse Jutta Zambona in 1925. They both were unfaithful to each other, and the marriage ended in divorce five years later. However, they fled together to his home in Switzerland when the Nazis took over Germany.
His love affair with Marlene Dietrich began in 1937 when they met in Venice for the film festival. It continued via letters, cables and telephone calls.
In 1938, Remarque and his ex-wife Ilse Jutta Zambona remarried in Switzerland as a protective measure to prevent her from being forced to return to Germany. They migrated to the US two years later.
He and Zambona became naturalised American citizens in 1947. They divorced again a decade later and he married actress Paulette Goddard. They remained married until his death.
Remarque was interred in the Ronco Cemetery in Switzerland. After her death, Goddard was interred next to him. She bequeathed $20 million to fund an institute for European studies, named in his honor.
Trivia
Efforts were on to save this writer’s villa, Casa Monte Tabor, from demolition, and convert it into a museum and home to an artist-in-residence programme, focused on creativity, freedom and peace.
You May Like