Paulette Goddard was an American film actress, who started off as a child model and went on to become one of the most sought-after actresses during her career. This extremely ambitious beauty took to modeling at a delicate age of 10 to support her mother financially and in due time, ventured into acting and singing, thereby creating a niche for herself in the entertainment industry. Charles Goddard, her great-uncle, introduced her to Broadway. As she was determined to earn name and fame, she moved to Hollywood to try her luck in films. After a series of uncredited appearances in a couple of movies, she was cast as the leading lady in Charlie Chaplin’s last silent film ‘Modern Times’, which changed her life for good. Gradually, she started ascending to stardom and appeared in a number of hit movies during the 1940s - the most popular being ‘The Great Dictator’, ‘So Proudly We Hail!’, ‘Kitty’, ‘The Diary of a Chambermaid’, ‘Unconquered’, and ‘Reap the Wild Wind’. This vivacious artist became a notable figure not just for her highly-accredited roles, but also for her four marriages and her glamorous lifestyle American Celebrities
American Women
New Yorkers Actresses
Gemini Actresses
American Actresses
Childhood & Early Life
Paulette Goddard was born as Pauline Marion Levy on June 3, 1910, in Whitestone Landing, Queens, New York, as the only child to Jewish cigar manufacturer Joseph Russell Levy and English Episcopalian Alta Mae Levy.
Her parents separated and later divorced in 1926, after which she was brought up by her mother. They had to move from New York to Canada to Kansas to escape her father’s custody.
She quit studies at an early stage to support her mother, briefly attending Mount Saint Dominic Academy at Caldwell, New Jersey, and Ursuline Academy at Pittsburgh, Pennsylvania.
She took up modeling at the age of 10 with Saks Fifth Avenue and moved to fashion designer Hattie Carnegie as a teenager. 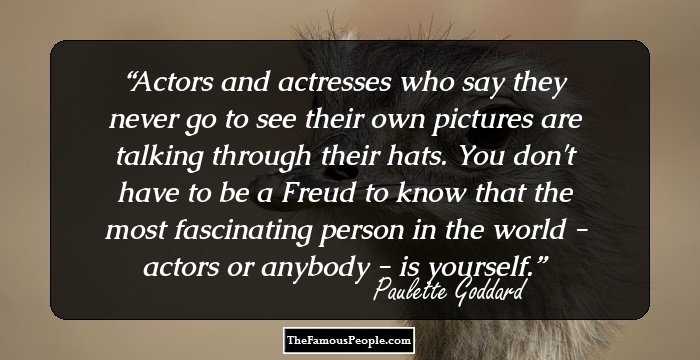 The Best Black Actresses Of All Time
Career
She made her Broadway debut as a Ziegfeld dancer in the 1926 summer revue ‘No Foolin’ and later appeared in another revue ‘Rio Rita’ in 1927. Also, she played a small role in Archie Selwyn’s ‘The Unconquerable Male’.
She moved to Hollywood in 1929 and made her screen debut as an extra in ‘Berth Marks’ (1929), ‘The Locked Door’ (1929), ‘The Girl Habit’ (1931), and ‘The Mouthpiece’ (1932).
In 1932, she played a Goldwyn Girl in Samuel Goldwyn’s ‘The Kid from Spain’ and later collaborated with Hal Roach, playing unnoticed supporting roles over the next few years.
Her contract with Roach was bought by Charlie Chaplin, who cast her in his 1936 silent film ‘Modern Days’ as the energetic ‘Gamine’, which proved as a turning point in her career.
While Chaplin wanted to work with her after the success of ‘Modern Days’ but she feared that Chaplin’s slow pace of work might put her career in danger so she signed a contract with David O. Selznick and did ‘The Young in Heart’ (1938) and appeared in two MGM movies – ‘Dramatic School’ (1938) and ‘The Women’ (1939).
She did three comedy films with Bob Hope – ‘The Cat and the Canary’ (1939), ‘The Ghost Breakers’ (1940), and ‘Nothing but the Truth’ (1941), which resulted in a ten-year contract with Paramount Studios.
In 1940, she bonded with Chaplin in his first talkie ‘The Great Dictator’. The same year, she played the protagonist, alongside Fred Astaire, in ‘Second Chorus’.
Her career graph saw a steep rise during 1940s as she appeared in a variety of films, such as ‘Pot o’ Gold’ (1941), ‘The Lady has Plans’ (1942), ‘So Proudly We Hail!’ (1943), ‘The Diary of a Chambermaid’ (1946) and ‘Unconquered’ (1947).
In the late 1940s and 1950s, she worked in B-grade films including ‘Hazard’ (1948), ‘Bride of Vengeance’ (1949), ‘Anna Lucasta’ (1950), ‘Paris Model’ (1953), ‘Charge of the Lancers’ (1954), and ‘A Stranger Came Home’ (1954) but most of these films were below par.
Continue Reading Below
She established Monterey Pictures along with John Steinbeck, and featured in grade ‘B’ pictures, such as ‘The Torch’ (1950), ‘Babes in Baghdad’ (1952), and ‘Vice Squad’ (1953).
She moved on to television during mid-1950s, and appeared in ‘The Ford Television Theatre’, ‘Climax!’, ‘Producers’ Showcase’, and television remake of ‘The Women’. She also toured in summer stock – ‘Waltz of the Toreadors’ and ‘Laura’.
In 1964, she returned to the silver screen, playing a supporting role in the Italian production ‘Time of Indifference’, which happened to be her last film, although she played a small role in a made-for-TV film ‘The Snoop Sisters’ in 1972. 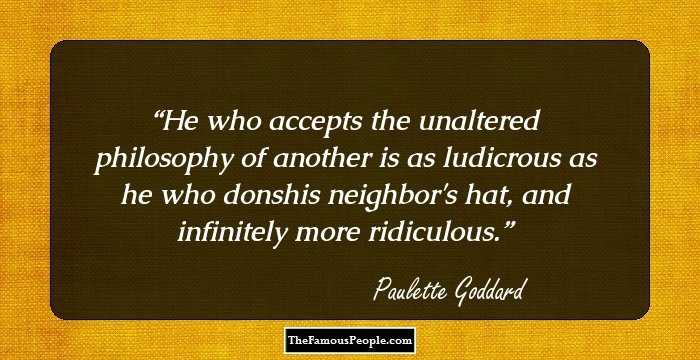 Major Works
The variety musical ‘Star Spangled Rhythm’, released in 1943, is counted among her best performances, where she lent her voice to the comic song ‘A Sweater, a Sarong, and a Peekaboo Bang’.
Besides ‘Kitty’ (1945), which was the most successful film of her career, she also acted in some other blockbuster movies, namely, ‘North West Mounted Police’ (1940), ‘Reap the Wild Wind’ (1942), and ‘Unconquered’ (1947).
Awards & Achievements
She was nominated for the Oscar for Best Supporting Actress for her film ‘So Proudly We Hail!’ in 1943. 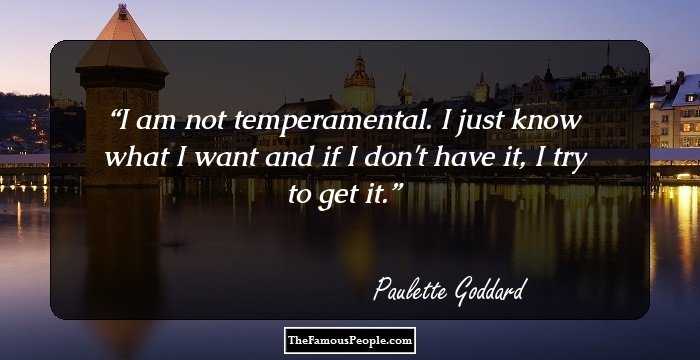 Quotes: Trying
Personal Life & Legacy
She was introduced to millionaire playboy Edgar William James, president of the Southern Lumber Company, by her uncle Charles Goddard, whom she married in June 1927 and settled in Asheville, North Carolina.
Continue Reading Below
The marriage didn’t last long and ended with a divorce in 1929, with Goddard receiving an alimony settlement amounting $375,000.
She met Charlie Chaplin in 1932 and the two hit off instantly. Their relationship became a hot topic for the media and Hollywood gossip columns.
The couple left for a five-month cruise to Asia, along with Goddard’s mother, in 1936, during which they married secretly in China. She, therefore, became Chaplin’s third wife and stepmother to Charles Chaplin Jr. and Sydney Chaplin.
The marriage failed due to Chaplin’s busy work schedules. The two separated in 1942, with Goddard obtaining a Mexican divorce and $1 million settlement.
She met Burgess Meredith while working on ‘Second Chorus’, whom she married in 1944. The same year, she had a miscarriage due to an ectopic pregnancy. The couple divorced in 1949.
In 1958, she married German novelist Erich Maria Remarque, famous for authoring ‘All Quiet on the Western Front’, and settled in Ronco sopra Ascona, Switzerland. The marriage lasted until Remarque’s death in 1970.
Following Remarque’s death, she inherited his wealth and property in Europe, including a large contemporary art hoard, and resided in her luxurious Switzerland home for the remaining part of her life.
She was diagnosed with breast cancer in mid 1970s and underwent successful treatment through an invasive surgery. She contracted emphysema due to excessive smoking and died on April 23, 1990, after a heart failure, aged 79.
She was laid to rest in Ronco Village Cemetery, next to her husband Remarque and her mother.
Apart from donating $3 million as scholarships to 300 film and theatre students at Tisch School of the Arts, New York University (NYU), she left a will amounting $20 million to the university.
A NYU freshman residence hall, situated in New York City’s Washington Square, is named Goddard Hall in her honor.
Trivia
Her great-uncle, Charles Goddard, owner of the American Druggists Syndicate, played a major role in boosting her career and introducing her to theater producer Florenz Ziegfeld. She later adopted his surname Goddard

Quotes By Paulette Goddard | Quote Of The Day | Top 100 Quotes

See the events in life of Paulette Goddard in Chronological Order