(One of the Greatest Hungarian Poets of the 20th Century)

Endre Ady was a Hungarian poet and journalist famous for his revolutionary pieces of writing in the fields of eroticism, politics, and religion. Best known for his poems on sensual love, he was equally celebrated for his religious writings characterized by biblical styles and imagery. Outspoken and radical in his thoughts, he never shied away from violating the set norms of the society, be it in his writings or his personal life. Born into a noble but poor family, he had a humble upbringing which sensitized him to the plights of the common man. Initially he had planned to become a lawyer though by the time he was about to complete his legal studies he had realized his true calling and decided to become a journalist instead. He had already started writing poetry during college and his career in journalism opened up wider horizons for him as a professional writer. As a young man he fell in love with a married woman who became his muse, and this marked the beginning of a period of heightened creativity for him. Eventually his poems began attracting attention and his style matured and evolved over the years making him a much revered poet of his time. He was also a hard-core alcoholic and this eventually led to his untimely death at the age of 41. Hungarian Celebrities
Male Poets
Male Writers
Hungarian Poets
Sagittarius Poets
Childhood & Early Life
He was born on 22 November 1877 in Érmindszent Szilágy County, Kingdom of Hungary. His mother Mária Pásztor came of a long line of Calvinist ministers. His father’s name was Lőrinc Ady. Endre was one of the three children born to his parents.
He was born with six fingers on each hand; the extra two fingers were cut off by the midwife. He used to call the scars his “wizard marks”.
He went to the Calvinist school until he was about nine. Then he attended a Catholic school and then went to a Catholic gymnasium at the town of Nagykároly.
Eventually he moved to a Calvinist college at Zilah. Many of his classmates there went on to become famous personalities such as, radical thinkers and politicians.
He was a voracious reader and was greatly influenced by the works of Arthur Schopenhauer.
After his graduation he studied law at the Reformed College in Debrecen. However, legal studies did not hold his interest for long and soon he realized that he wanted to become a journalist. 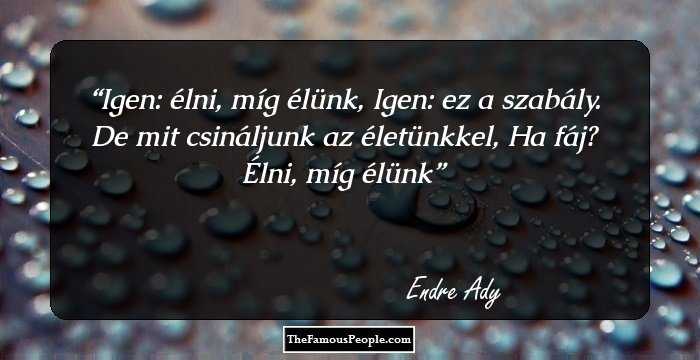 Continue Reading Below
Career
During his student years he started writing seriously but also became an alcoholic. He abandoned his studies to take up a job with a newspaper in Debrecen.
His first book of poetry, ‘Versek’ was published in 1899. Even though this volume largely went unnoticed, it instilled in him a deep love for writing.
Starting from 1900 he worked as a journalist, a profession he would follow for the rest of his life. However, he would never have a stable career because of his drinking habit and would drift from one newspaper to another.
He went to Nagyvárad, a hub of intellectual activities where he lived for four years. Even though it was a very enriching experience for him, it was also the time when he contracted syphilis.
He published another book of poetry, ‘Még egyszer’, in which his literary skills became apparent, but this volume too was not much successful commercially.
An incident in August 1903 changed the course of his life forever. He came across Adél Brüll, a wealthy married woman living in Paris who he met while she was visiting Nagyvárad. He fell in love with her and she became his muse.
Over the next several years he made numerous trips to Paris and his love for the woman heightened his creativity and helped him evolve as a poet and writer.
In 1906, he released his next book, ‘Uj versek’ which established him as a respected poet in the Hungarian literary scene. He burst into the Hungarian poetry scene at a time when there were not many original poets powerful enough to impress the public with their creative works.
As he grew in prominence, he described his work as “new verses of a new era”. His poems were revolutionary and unconventional in terms of language, form and content. He perceived Hungary to be too narrow-minded and thus attacked his country violently through his words leading to considerable controversy.
In his book ‘Az Illés szekerén’ (1908), he expressed his views about religion, and his choice of unconventional language combined with his symbolism made him both popular and controversial at the same time. His political views about Hungary were so critical that the Prime Minister István Tisza, became his prominent opponent.
He suffered from ill health during his later years and was also mentally exhausted after having a series of affairs with different women. In October 1918, he was elected as the chairman of the Vörösmarty Academy which was just founded. But by this time he was very ill and was just a shadow of the revolutionary intellectual he once was.
Major Works
His book 'Uj versek' breathed new life into the dormant Hungarian literary scene. The poems in the book were revolutionary in form, language and content.
Personal Life & Legacy
He met and fell in love with a 20-year-old girl, Berta Boncza, in 1914 and proposed to her. However the girl’s father did not consent to this marriage so the couple married without his permission in 1915.
He was known to consume alcohol in the excess and also suffered from syphilis. He became very ill in the late 1910s and died on 27 January 1919. He was just 41.

See the events in life of Endre Ady in Chronological Order