Emily Jane Browning is a young Australian actress known for her roles in films such as 'Ghost Ship' and 'Sleeping Beauty.' Born in Melbourne, Victoria, in Australia, she began her acting career at an early age. At the age of nine she played a supporting role in the Australian family drama TV film ‘The Echo of Thunder.' Her role helped her gain attention and she next appeared in a few TV shows. She then played the daughter of the lead character in the comedy film 'The Man Who Sued God'. The film became a huge success. She proceeded to appear in the horror film 'Ghost Ship’ which was about a ship's encounter with paranormal beings. Other significant works in her career include her role in the American psychological horror film 'The Uninvited'. The film starred her in the lead role of a psychologically damaged girl who is released from a mental institution. She gained international fame for her role in the erotic drama film 'Sleeping Beauty.' The film which starred her in the lead role was a huge success. Browning's performance was also hugely appreciated. Her most recent work is her role in the American Greek film 'Golden Exits', where she is seen in the lead role. 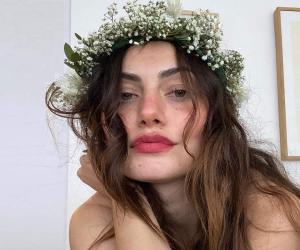 Phoebe Tonkin
Actresses #601
Film & Theater Personalities #1323
DID WE MISS SOMEONE?
CLICK HERE AND TELL US
WE'LL MAKE SURE
THEY'RE HERE A.S.A.P
Quick Facts

Australian People
Sagittarius Actresses
Australian Actresses
Actresses Who Are In Their 30s
Women Film & Theater Personalities
Childhood & Early Life
Emily Browning was born in Melbourne, Victoria, on 7th December 1988 to parents Andrew and Shelley Browning. She has two younger brothers named Nicholas and Matthew.
She did her schooling from Hurstbridge Learning Co-op and later Eltham High School. She participated in a school play, where she was noticed by a classmate’s father who helped her begin her acting career.
Continue Reading Below
You May Like

The Most Popular US Veterans
Career
Emily Browning started her career at the age of nine with a supporting role in the TV film 'The Echo of Thunder.' The film was directed by Simon Wincer. Her role in the movie gained her recognition and she was next seen in the television series ‘Something in the Air’ from 2000 to 2001. She also played a role in the TV series ‘Blue Heelers’ from 2000 to 2002.
Her next appearance on the big screen was in the role of the lead character's daughter in the comedy film 'The Man Who Sued God.' She made her Hollywood debut in 2002 with a supporting role in the horror film 'Ghost Ship'. The film was a commercial success. However it was met with negative reviews.
Browning next appeared in the film 'Ned Kelly' playing a supporting role. She proceeded to play a significant role in the film 'Lemony Snicket's A Series of Unfortunate Events.' For a few years after that, she was not seen in any films. She made her comeback with the 2009 American psychological horror film 'The Uninvited.' The film starred her in the lead role.
She played the lead role in the 2011 action thriller film 'Sucker Punch'. The film, which was directed by Zack Snyder, was not very successful commercially. It was also met with negative reviews.
The same year she earned international acclaim for her role in the Australian film 'Sleeping Beauty'. Directed by Julia Leigh, the film portrayed her as a university student who takes up a part-time high-paying job which involves her sleeping nude with rich men. Browning's performance won her an award at the Hamptons International Film Festival.
As her popularity grew over the years, she continued to play significant roles in films such as 'Summer in February' (2013), 'God Help the Girl' (2014) and 'Legend' (2015). Browning’s latest work on the big screen is her role in the 2017 film ‘Golden Exits’.
Major Works
'The Man Who Sued God’ is a 2001 Australian comedy film, where Emily Browning made her big screen debut. The film, which was directed by Mark Joffe, was about a man whose fishing boat is destroyed after being struck by lightning. Since his insurance is denied on the ground that his boat was destroyed due to an ‘act of God’, he files a claim against God, having church officials represent Him. The film was a commercial success, and was also met with positive reviews from critics.
‘The Uninvited’ a 2009 psychological horror film is another one of the significant works in Emily Browning’s career. Directed by the Guard Brothers, the film was a remake of a South Korean horror film named ‘A Tale of Two Sisters.’ The story revolves around a mentally unstable woman Anna, portrayed by Browning. Her life gets even messier after she is released from a mental institution, where she had been staying for months, because of her suicide attempt. The film did well commercially and was met with mixed reviews.
One of the most significant works in Browning’s career is her role in the film ‘Sleeping Beauty’. The film was directed by Julia Leigh. The film starred Browning in the lead role, playing a university student who takes a part-time job which pays well, but requires her to sleep nude alongside rich men. The film was based on the novels ‘The House of the Sleeping Beauties ‘and ‘Memories of My Melancholy Whores.’ It was a commercial success, and was met with mostly mixed reviews.
Browning’s recent works on the big screen include her role in the 2015 crime thriller film ‘Legend’. The film was adapted from John Pearson’s book ‘The Profession of Violence: The Rise and Fall of the Kray Twins’. The film was directed by Brian Helgeland. The story revolves around a former boxer who becomes a member of the criminal underground in London, who along with his brother tries to control a large part of London’s underworld. The film was a commercial success, and won multiple awards.
Awards & Achievements
In 2002, Emily Browning won the ‘Australian Film Institute’ Award for her minor role in the TV series ‘Halifax f.p.: Playing God’. She won the award again for her role in the film ‘Lemony Snicket's A Series of Unfortunate Events’.
In 2011, she was awarded at the Hamptons International Film Festival's Breakthrough Performer award for her brilliant performance in the film ‘Sleeping Beauty.
Personal Life
Emily Browning has been dating actor Max Irons since 2011.

See the events in life of Emily Browning in Chronological Order