Elizabeth Gaskell was a 19th century British novelist and short story writer. One of the leading female novelists of the Victorian era, her work was characterized by powerful narratives and accuracy in social observations. She often wrote about the lives of the underprivileged sections of the society and was open in her sympathies towards the workers in the industrial sector. She was famous for creating dynamic female characters, and often emphasized on the roles women play in family and society. Born as the daughter of a Unitarian minister, her own adherence to the principles of the Unitarian movement is evident from her writings. She suffered a tragic loss when quite young—her mother died and the little girl was sent to live with an aunt. She received the traditional education normally given to young ladies of her time and also developed an interest in literature. However, she embarked on a full-time writing career only after her marriage. She started writing a diary after becoming a mother and co-authored a collection of poems with her husband. Eventually she began writing more and tasted fame when she wrote a biography of her friend, the writer Charlotte Bronte. Eventually she ventured into writing industrial novels and ghost stories and found considerable success in both the genres Princess Michae...
DID WE MISS SOMEONE?
CLICK HERE AND TELL US
WE'LL MAKE SURE
THEY'RE HERE A.S.A.P
Quick Facts

British People
Non-Fiction Writers
Short Story Writers
British Women
Libra Writers
Childhood & Early Life
She was born as Elizabeth Cleghorn Stevenson on 29 September 1810 in Chelsea as the youngest of eight children. Her father, William Stevenson, was a Scottish Unitarian minister, and her mother’s name was Elizabeth Holland.
Her mother died when Elizabeth was just around a year old. Her father, unable to cope with the pressures of bringing up a small child sent Elizabeth to live with her maternal aunt.
She started attending a school run by the Miss Byerlys at Barford House in 1821. After five years she moved to Avonbank in Stratford-on-Avon where she received a traditional education and was trained in arts, the classics, decorum and propriety.
She also developed a love for literature and was encouraged by her father in her intellectual pursuits. 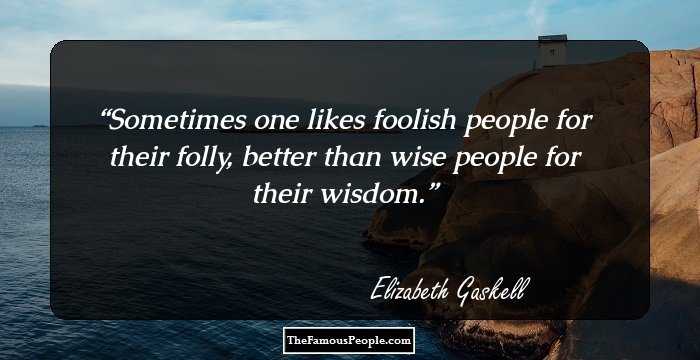 Continue Reading Below
Career
In 1836, Elizabeth Gaskell co-authored a collection of poems with her husband, William Gaskell. The collection, titled ‘Sketches among the Poor’ was published in ‘Blackwood's Magazine’ in January 1837. Over the next few years some of her poems appeared in William Howitt’s publication though it would be years before she could emerge as an independent writer of fiction.
Her first work of fiction, ‘Libbie Marsh's Three Eras’ was published in ‘Howitt's Journal’, under the pseudonym "Cotton Mather Mills" in 1847. She used the same pseudonym for two of her others works.
She published her first novel, ‘Mary Barton’, anonymously in 1848. The story revolved around the life of a young motherless girl called Mary who belonged to a working-class family.
She moved to a villa at 84 Plymouth Grove in 1850 and became acquainted with writers, religious dissenters and social reformers such as William and Mary Howitt, Charles Dickens, Harriet Beecher Stowe and John Ruskin. She also became close friends with the writer Charlotte Brontë. This was a creatively stimulating period for Gaskell.
In 1853, she wrote the novel, ‘Ruth’ which revolves around the story of a poor orphaned girl of the same name. A social novel, it deals with Victorian views about morality, sin, and illegitimacy. The novel explores whether a “fallen woman” can be re-integrated into the “respectable” society.
Her friend Charlotte Bronte died in 1855 and Bronte’s father asked Gaskell to write his daughter’s biography. She agreed and published ‘The Life of Charlotte Bronte’ in 1857. Gaskell became the first person to write Bronte’s biography and the popularity of this work helped her in her own literary career.
The year 1863 saw the publication of the novel, ‘Sylvia’s Lovers’ which in the author’s own words was "the saddest story I ever wrote”. A melodramatic work of fiction, the work was praised and compared positively with the writings of George Eliot.
Along with being a novelist she was also a reputed writer of novellas and short stories. The novella ‘Cousin Phillis’ (1864) is considered one of her best known novellas with its uncomplicated storyline and narration.
In 1865, she was working on the novel ‘Wives and Daughters’, a tale about Molly Gibson, the only daughter of a widowed doctor living in a provincial English town in the 1830s. Elizabeth Gaskell died unexpectedly the same year and left behind the incomplete work which was later completed by Frederick Greenwood. 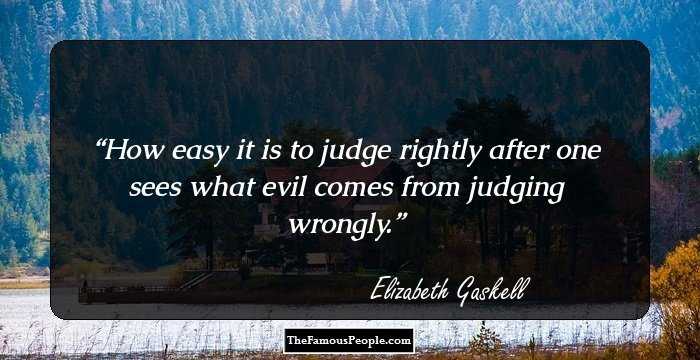 Major Work
Her first novel, ‘Mary Barton’, is one of the best known of her works. The novel, set in the city of Manchester between 1839 and 1842 deals with the difficulties faced by the Victorian lower class. She accurately depicted the miserable living conditions of the working class in this work and this kindled some controversy.
Personal Life & Legacy
Elizabeth married a Unitarian minister, William Gaskell, on 30 August 1832. She gave birth to six children including a daughter who was stillborn and a son who died in his infancy. It was the death of her son that prompted her to drown her sorrow in writing and motivated her to write her first novel.
She died of a heart attack on 12 November 1865, at the age of 55.
A memorial to Elizabeth Gaskell was dedicated in Poets' Corner in Westminster Abbey on 25 September 2010. 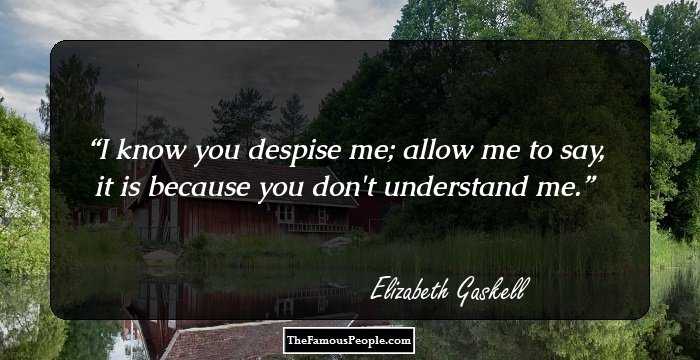 Quotes: You, Me, I
Recommended Lists:
Writers #488

Quotes By Elizabeth Gaskell | Quote Of The Day | Top 100 Quotes

See the events in life of Elizabeth Gaskell in Chronological Order