Eli Broad was an American entrepreneur and philanthropist who built KB Home, a homebuilding company, and SunAmerica, an insurance corporation, becoming the only person to build two Fortune 500 companies in different industries. Famous for his unconventional ways of conducting business, he cultivated an image for being “completely unreasonable”. He credited his unreasonable ways for his phenomenal success which he believed he would have never achieved had he chosen to stick with the accepted conventions in business. Born to Lithuanian Jewish immigrant parents in the United States, he was raised in a middle-class home. In spite of his modest upbringing, he harbored ambitious dreams from a young age. A good student, he graduated from Detroit Central High School and went on to study accountancy and economics at the Michigan State University. He had to work very hard to provide for himself while still studying and worked at a number of odd jobs to make ends meet. After working for a couple of years he decided to open his own business and teamed up with a relative to start KB Home which proved to be a highly successful venture. Encouraged by its success, Broad acquired Sun Life Insurance Company of America and transformed it into SunAmerica. He also devoted a lot of time and energy to philanthropic efforts along with his wife. Gary Rhodes
Business People #1144
DID WE MISS SOMEONE?
CLICK HERE AND TELL US
WE'LL MAKE SURE
THEY'RE HERE A.S.A.P
Quick Facts

American Celebrities
Michigan State University
Gemini Entrepreneurs
American Entrepreneurs
Gemini Men
Childhood & Early Life
Eli Broad was born on June 6, 1933, in Bronx, New York City, U.S, to Lithuanian Jewish immigrant parents as their only child. His family was of modest means—his father worked as a house painter, and his mother worked as a dressmaker. The family moved to Detroit, Michigan when Eli was six years old.

Famous Beautiful Women With Green Eyes
Career
He started working as an accountant upon the completion of his studies. He also taught night classes at the Detroit Institute of Technology as an assistant professor of accounting in 1956.
After working as an accountant for a while he decided to open his own business—an accounting firm. A relative from his wife’s side, Donald Kaufman, offered him office space and in return Broad promised to do the accounting work at Kaufman’s real estate firm.
Broad and Kaufman got along well and they decided to team up and build homes together in 1957. Broad borrowed some money from his wife’s parents to contribute towards his share of the capital investment and the duo founded the homebuilding company Kaufman & Broad (later shortened to KB Home).
Broad was responsible for land acquisition and materials while Kaufman handled the design. The company soon became successful, designing and building affordable homes for primarily first-time house buyers. Their designs were innovative and cost effective, and within two years Kaufman & Broad had built 600 homes in the Detroit suburbs.

In 1962, the company expanded to Arizona, and a year later to California. Their growing success propelled them to venture into international markets and in 1967, they became the first U.S. homebuilder to expand into France.

Broad acquired Sun Life Insurance Company of America, a family-owned insurance company, in 1971. He transformed Sun Life into SunAmerica and built it into a Fortune 500 company which he sold to the American International Group (AIG) for $18 billion in 1999. He continued as CEO of SunAmerica until 2000.
Major Works

Awards & Achievements
He was named Chevalier in the National Order of the Legion of Honor by the Republic of France in 1994.
He received the Carnegie Medal of Philanthropy in 2007.
In 2009, he was honored with the David Rockefeller Award by the Museum of Modern Art.
Personal Life, Legacy & Death

He met and fell in love with Edythe "Edye" Lawson while both were at the Michigan State University. The couple got married in 1954, and had two children.

Eli Broad was a life trustee of The Museum of Contemporary Art in Los Angeles, to which The Broad Foundation gave a $30 million challenge grant in December 2008.

The Broads are members of "The Giving Pledge" and have personally committed to give 75 % of their wealth away.
You May Like

See the events in life of Eli Broad in Chronological Order 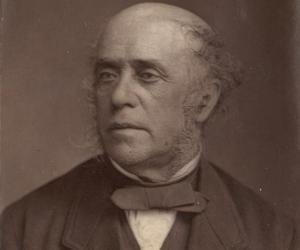