Arianna Huffington is an author, philanthropist, television personality and owner of the independently liberal online news magazine, ‘The Huffington Post’. Originally from Greece, she moved to England when she was 16 and graduated from Cambridge University with an MA in Economics. At 21, she became president of the famed debating society, ‘The Cambridge Union’ and was the first foreign born student to do so. After graduation, she made her mark as a conservative syndicated columnist and with the launch of ‘The Huffington Post’ few years later, she created an online voice portal which offered critical observations on the political scenario. Her celebrity status helped her in getting several high-profile contributors to post their views on politics, news and culture. Arianna rose to fame in 2003 after she decided to contest as an independent candidate in the California recall election to replace then Governor Davis. Apart from this, she also led a Detroit project to promote fuel efficient cars. In 2009, she was named by Forbes as ‘The most influential women in media’; gaining 12th position in the list and in the same year Guardian included her in the top 100 media list. In 2011, AOL Inc. acquired ‘The Huffington Post’ and made her president of that media group which included many then-existing AOL properties too such as ‘Engadget’, ‘AOL music’, ‘Style list’ and ‘Patch Media’. Jack Dorsey
15th July In History
DID WE MISS SOMEONE?
CLICK HERE AND TELL US
WE'LL MAKE SURE
THEY'RE HERE A.S.A.P
Quick Facts

American People
Business Women
American Women
Women CEOs
Cancer Writers
Childhood & Early Life
She was born to a journalist and management consultant Konstantinos and his wife Elli Stasinopoulos. Though she was close to her father, it was the relationship she shared with her mother that shaped her life.
Even during her formative years, she exhibited leadership skills for which she is still well-known. At 16 years of age, she moved to the United Kingdom to pursue her studies and enrolled in Girton College, Cambridge. During her college days, she joined the college debating society, Cambridge Union where she became the first foreign and third female president.
In 1972, she graduated with a master’s degree in Economics. After her graduation, she worked as a columnist, critic, and a television host. She also appeared in an edition of ‘Face the music’ along with Bernard Levin and began writing books taking editorial help from him. 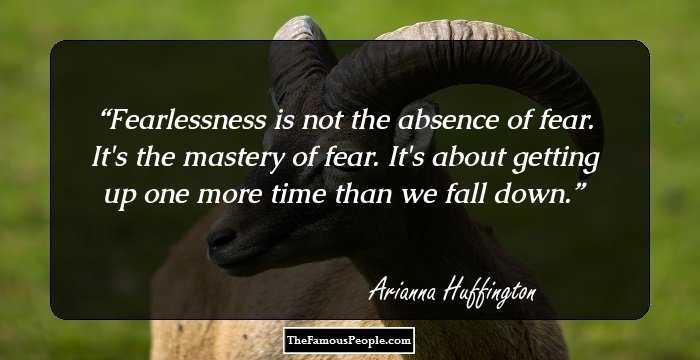 Quotes: Time, Fear
Continue Reading Below
Career
In 1973, she wrote ‘The Female Woman’ which emerged as one of her career’s bestsellers. The book was a sensation and it questioned many early strains of the feminist movement. It brought her considerable amount of fame and success.
In 1978, she came out with her second book, ‘After reason’ which showed failure of Western society to satisfy the basic spiritual needs of man due to emergence of materialism. The book didn’t receive the expected response from public, so she began working for the British editions of ‘Vogue’, ‘Cosmopolitan’, and newspapers such as ‘Daily mail’ and ‘The Spectator’.
In 1980, she moved to New York due to some personal issues. The following year saw the release of her biographical book, ‘Maria Callas – The Woman Behind the Legend’. The book sold extremely well and made her a big hit in the city and this recognition introduced her to the city’s social elite.
In 1994, she was accused of stealing themes of an unpublished four-volume PhD thesis of Lydia Gasman and using it in her biography of Pablo Picasso in 1988. Gasman did not file any suit though. Columnist Maureen Orth also claimed that Huffington borrowed heavily for her 1993 book, ‘The Gods of Greece’.
In 1994, she gained national prominence during the unsuccessful senate bid by her then husband Michael Huffington. She became famous as a reliable supporter of conservative and became one of the most influential speakers of the Republican Party.
In 1996, she teamed up with a liberal comedian Al Franken as conservative half of the ‘Strange Bedfellows’ during Comedy Central’s coverage of the U.S. Presidential elections of that year.
In 1998, she started doing a weekly radio show in Los Angeles called ‘Left, Right and Center’ that matched her, a ‘right-winger’, against the self-proclaimed centrist, Matt Miller and a leftist journalist, Robert Scheer.
In 2000, she opposed the NATO intervention during the Yugoslav wars and initiated the ‘Shadow Conventions’ which appeared at the Republican National Convention in Philadelphia and the Democratic National Convention in Los Angeles at Patriotic Hall.
In 2003, she ran as an independent candidate against Arnold Schwarzenegger in California’s recall elections but dropped out after a terrible campaign which made her position sink during polls where she eventually finished fifth, capturing 0.55% of the votes.
Continue Reading Below
In 2004, she spoke for the College Democrats of America Convention which was held along with the 2004 Democratic National Convention. In the following year, she became the panel speaker at the California Democratic Party State Convention which was held in Los Angeles. She is a regular panelist on the weekend radio program ‘Both side now with Huffington and Matalin’ hosted by Mark Green.
In November 2008, she joined the cast of an animated series, ‘The Cleveland Show’ where she lend her voice to the wife of ‘Tim, the bear’ also named Arianna. She made few appearances on shows such as ‘Roseanne’, ‘The L Word’, ‘How I Met Your Mother’, ‘Help Me Help You’, and the film ‘EdTV’. 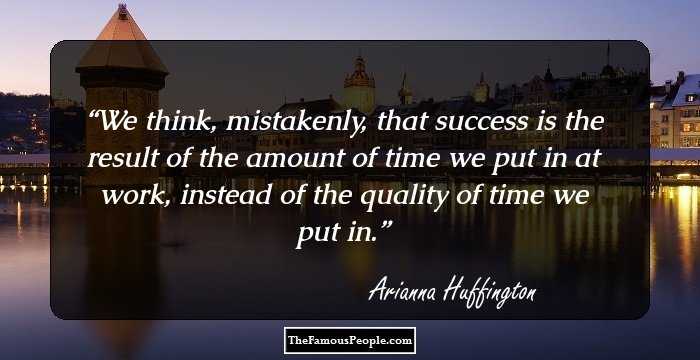 Quotes: Think, Time
Major Works
In 2003, she founded the ‘Detroit Project’ along with three other people for lobbying American automakers to build cars and SUVs that have higher fuel efficiency and use alternative fuels.
On May 9, 2005, she launched ‘The Huffington Post’ as a liberal outlet and alternative to certain news aggregators. Six years later she became the editor-in-chief of The Huffington Post media group.
On September 16, 2010, she participated in the 24th annual ‘Distinguished Speaker Series’ at the University of Buffalo, New York where she headlined a debate against radio co-host Mary Matalin on world events, political issues and local economy.
On October 30, 2010, she provided many buses to ferry people from Citi Field in Queens to RFK stadium in Washington DC who wanted to go to Jon Stewart’s ‘Rally to restore sanity and/or fear’.
Awards & Achievements
In 1997, she was nominated for the primetime Emmy for a comedy talk show ‘Politically Incorrect’ under the category of ‘Outstanding writing for a variety or music program’.
In 2012, ‘The Huffington Post’ became the first commercially run US digital media enterprise to win a Pulitzer Prize. 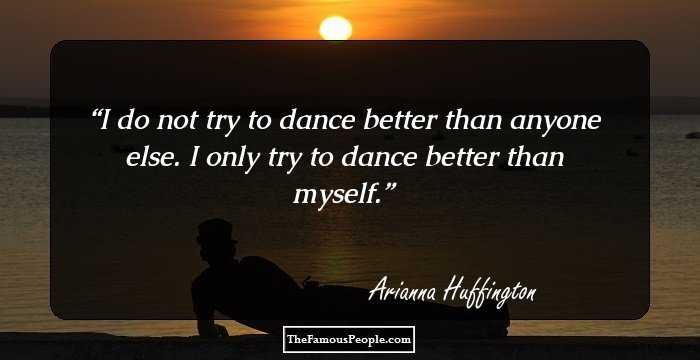 Quotes: I
Personal Life
In 1971, she met Bernard Levin in an edition of ‘Face the music’ and soon a relationship developed between them. She always remained deeply in love with him but they parted ways in 1980 because Levin never wanted to marry or have children.
On April 12, 1986, she married Michael Huffington after six months of courtship and moved to Santa Barbara, California. The couple has two daughters, Christina Sophia Huffington and Isabella Diana Huffington. In 1997, the couple divorced following a disclosure by Michael Huffington that he is bisexual.
Trivia
She serves on the board of directors of the Center for Public Integrity.
In 2009, she was named as number 12 in Forbes' first-ever list of the Most Influential Women In Media.
Recommended Lists:
Writers #1596

Quotes By Arianna Huffington | Quote Of The Day | Top 100 Quotes

See the events in life of Arianna Huffington in Chronological Order