Eleanor Roosevelt was the wife of former American President Franklin Delano Roosevelt and the First Lady of the United States from 1933 to 1945. After the death of President Roosevelt, Eleanor rose to fame with her work related to women’s empowerment, New Deal coalition and as a writer, public speaker and political activist. She was a keen political figure who had chaired the John F. Kennedy administration's path breaking committee that brought the start of second-wave feminism. Her role as the chairman of the Presidential Commission on the Status of Women from 1961 to 1962 made her rank in the top ten of the ‘Gallup's List of Most Widely Admired People of the 20th Century’. Eleanor Roosevelt was a powerful figure who played a significant role in co-founding the NGO, ‘Freedom House’ and supporting the formation of the United Nations. She worked hard to bring positive changes in statuses of working women. She was a woman of various roles. She was invited by President Harry S. Truman and confirmed by the United States Senate to become a delegate to the UN General Assembly from 1945 and 1952. Eleanor Roosevelt rose much higher than being just the wife of President Roosevelt as she not only supported her husband’s New Deal policies but also became a prominent advocate of America’s civil rights. American Celebrities
First Ladies
American Women
Women Diplomats
American Diplomats
Childhood & Early Life
Anna Eleanor Roosevelt was born on October 11, 1884 in New York City. Her parents, Elliott Bulloch Roosevelt and Anna Rebecca Hall, were well-known socialites.Theodore Roosevelt, the 26th President of the United States, was her father’s elder brother.
Eleanor, who preferred to be known by her second name, was the eldest of her parents’ three children and had two brothers, Elliott Bulloch Jr. and Gracie Hall Roosevelt. In addition, she had a half brother named Elliott Roosevelt Mann, born through her father's liaison with a family employee Katy Mann.
In October 1892, Eleanor’s mother died from diphtheria and in May 1893, her brother Elliott passed away from the same disease. Soon her alcoholic father had to be confined into a sanatorium. He died there in August 1894.
Eleanor and Hall now began to live in the household of their maternal grandmother, Mary Livingston Ludlow, in Tivoli, New York. Although all her material needs were taken care of, mentally she was very unhappy and insecure. In spite of that, she took good care of Hall.
Eleanor was educated at home up to the age of fifteen. Thereafter, at the insistence of her aunt Anna Roosevelt Cowles, her father’s sister and a trusted confidante of President Roosevelt, she was sent to Allenswood Academy, a private finishing school in Wimbledon, England.
Here she studied from 1899 to 1902 and under the guidance of the headmistress she began to blossom. Her training during this period played a key role in shaping her social as well as political ambitions. 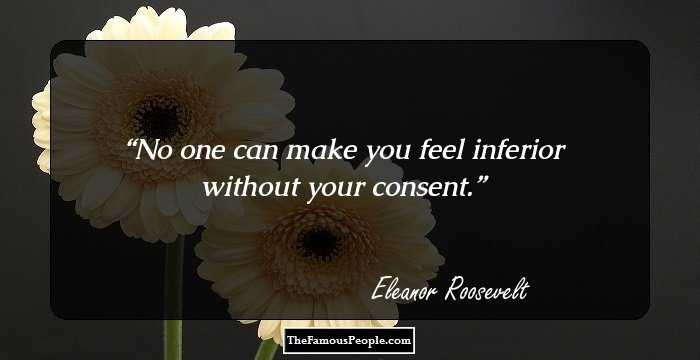 Quotes: You
Continue Reading Below
Return To USA
In 1902, Eleanor returned to USA at the bidding of her grandmother to be presented at the debutante ball in December. However, by then she had changed a lot and was more interested in social activities than parties and balls.
She now joined the National Consumers League as well as the Junior League for the Promotion of Settlement Movements and volunteered to teach at the College Settlement. Her dedication soon attracted the attention of reform circles in New York.
Also in the summer of 1902, she met Franklin Delano Roosevelt, her father’s fifth cousin from the Hyde Park line of the family. Subsequently, they got married on March 17, 1905 with Theodore Roosevelt signing the marriage certificate as a witness.
For about a decade, Eleanor’s life was controlled by her dominant mother-in-law Sara Ann Delano Roosevelt. She lived in the neighboring property in Hyde Park and for easier access into her son’s home, had connecting doors built between the two properties. She ran both the households.
Later, when her children began to be born, Sara also took control of their upbringing. Eleanor continued to struggle, concentrating on her domestic duties.
Sometime in 1911, FDR, as Franklin Roosevelt was popularly known, was elected to the New York Senate. Taking this opportunity, Eleanor moved to Albany, away from her dominating mother-in-law and set up her first real home. 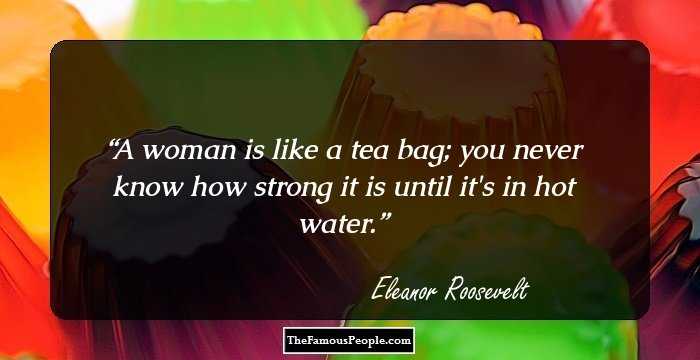 Quotes: You, Never, Like
Political Awakening
In the fall of 1913, FDR joined Woodrow Wilson’s administration as an Assistant Secretary of Navy. Eleanor now began to have a more proactive role, overseeing FDR’s transition from a Senator to a Junior Cabinet Member.
It not only increased her managerial skills, but also boosted her self-confidence. She now became more independent. During the First World War, Eleanor began her war-related work, volunteering to serve the navy hospitals and American Red Cross.
Continue Reading Below
In September 1918, as the WWI was drawing to an end, she discovered that FDR was having an affair with his secretary Lucy Mercer and was contemplating of leaving her. Although the marriage survived, Eleanor became disillusioned with it and from then on the marriage was reduced to a political partnership.
Emergence As A Public Figure
In 1920, FDR was nominated as the Democratic vice presidential candidate. Eleanor toured the country with him, making her first campaign appearances. As the Democrats lost the election, they returned to New York, where she continued with her public works.
In August 1921, FDR was afflicted with polio and became paralyzed. While his mother wanted him to retire from politics, Eleanor persuaded him to continue with it. She not only tended him devotedly, but also began to serve as a stand-in, making public appearances for him.
At the same time, she started working with the Women's Trade Union League, raising funds for them. Over the time, she became an influential leader with the New York State Democratic Party.
In 1924, she campaigned for Democrat Alfred E. Smith against her first cousin Theodore Roosevelt, Jr. in their run for New York State governorship. While Smith won the election by 105,000 votes, her relationship with her family became sour.
In 1927, Eleanor, along with few of her friends established Val-Kill Industries to provide supplemental income for local farming families; here they made furniture, pewter, and homespun cloth using traditional craft methods. She also played an important role in expanding the Dalton School.
In 1928, she played a significant role in promoting FDR in his successful bid as the governor of New York. During her husband’s governorship, Eleanor traveled widely through the state, inspecting state facilities, giving speeches and reporting to FDR at the end of each trip. 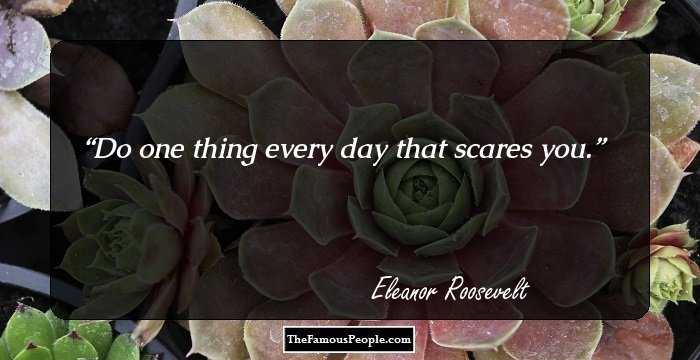 Quotes: You
Tenure As The First Lady
On March 4, 1933 Franklin Delano Roosevelt became the 32nd President of the United States of America and with that Eleanor Roosevelt became the First Lady of the country. However, the designation actually depressed her because she could not envisage a life similar to the ones led by the previous First Ladies.
Continue Reading Below
Therefore, she set on redefining the role and with her husband’s firm support, continued looking after her business interests and also giving speeches. While this attracted criticism, she earned $75,000 from her lectures and writing in the very first year.
While the ‘Bonus Army’ of WWI veterans and their families came marching to Washington DC, Eleanor went to meet them. She defused the tension between the administration and the veterans, paving the way for a permanent solution.
During her tenure as the First Lady between 1933 and 1945, she traveled widely, appeared regularly at press conferences and spoke about human rights, women’s issues and children’s causes. She also appeared regularly at labor meetings, reaching out to the workers during the Great Depression.
Moreover, she actively supported American Youth Congress and National Youth Administration, the latter being a New Deal Agency formed in the response to the Great Depression. She also dedicated a lot of her time and energy for anti-lynching campaigns and for fair housing for minorities.
As the Second World War broke out in 1939, she took up war time causes like allowing immigration of European refugee children to USA. She also tried to persuade the administration to accept greater number of Jews, persecuted by Nazis, but was not very successful in that.
In 1941, Eleanor Roosevelt co-chaired the Office of Civilian Defense and also wrote a script for a short film 'Women in Defense', which was released in the same year. Concurrently, she began to encourage women of all classes to learn trade and be independent.
In October 1942, she went to England, where she visited American troops as well as the British forces. In August 1943, to boost the morale of the American troops stationed in the South Pacific, she travelled there and was most shaken by what she saw.
Life After White House
Franklin Roosevelt suffered a cerebral hemorrhage in April 1945 and died on 12 April. Eleanor now returned to Val-Kill, a property she herself had built. Although she now decided to lead a private life, it was not to be.
In 1945, she was appointed a delegate to the United Nations General Assembly by President Truman, a position she held until 1953. From April 1946 to 1951, she was the chairperson of the preliminary United Nations Commission on Human Rights.
Continue Reading Below
In 1961, she was reappointed to the United States delegation by President John F. Kennedy. She was later appointed to the National Advisory Committee of the Peace Corps and to chair the President's Commission on the Status of Women.
Major Works
As Chairperson of United Nations Commission on Human Rights, she played an important role in drafting the Universal Declaration of Human Rights (UDHR). It was adopted by the General Assembly on December 10, 1948 by a vote of 48 in favor, none against; though eight countries abstained from voting.
Apart from her public work, she also found time to write several books about her life and experiences, including ‘This Is My Story’ (1937), ‘This I Remember’ (1949), ‘On My Own‘ (1958) and ‘Autobiography’ (1961). Besides, from 1936 until her death she wrote a syndicated column, ‘My Day’, which appeared six days a week.
Awards & Achievements
In 1968, in recognition of her work, the United Nation awarded her one of its first Human Rights Prizes posthumously.
Personal Life & Legacy
Franklin and Eleanor Roosevelt had six children, Anna Eleanor Roosevelt, James Roosevelt II, Franklin Roosevelt, Elliott Roosevelt, Franklin Delano Roosevelt, Jr. and John Aspinwall Roosevelt II.
In April 1960, Eleanor Roosevelt was diagnosed with aplastic anemia. In 1962, she had to be given steroids, which activated a dormant case of bone marrow tuberculosis.
On November 7, 1962 she died from cardiac failure at her Manhattan home. On November 8, the United States flag was flown at half-mast in her honor throughout the world.
Later in 1973, she was posthumously inducted into the National Women's Hall of Fame and in 1977 her stone cottage at Val-Kill was declared Eleanor Roosevelt National Historic Site.
In addition, the Eleanor Roosevelt Monument in Riverside Park, New York, Eleanor Roosevelt College in San Diego, and the Eleanor Roosevelt Awards for Human Rights, established in 1998 by the President Bill Clinton carry her legacy even today.

Quotes By Eleanor Roosevelt | Quote Of The Day | Top 100 Quotes

See the events in life of Eleanor Roosevelt in Chronological Order