Michelle Obama is the wife of U.S. President Barack Obama and the first African-American First Lady of the United States. A lawyer by training, she is the 44th First Lady and the third First Lady with a postgraduate degree. As an educated, intelligent, and independent minded woman, she has become a role model for women not just in America, but all over the world. Born as Michelle LaVaughn Robinson, she grew up in a middle-class family and had a conventional upbringing. She learned the values of hard work and perseverance from her father who despite being diagnosed with multiple sclerosis at a young age, never let the disease overcome his ambitions. Her home-maker mother instilled in her a reverence for family values. She was a bright girl who performed well at school and went on to graduate from the Harvard Law School. She was a successful lawyer when she met and married another lawyer, Barack Obama, and was soon juggling the roles of being a wife and mother along with being a professional. She played a major role in her husband’s presidential campaigns and her responsibilities increased manifold after becoming the First Lady. In this role she has focused on issues relating to women empowerment, children’s health and education, organic food movement, and national service Melania Trump
DID WE MISS SOMEONE?
CLICK HERE AND TELL US
WE'LL MAKE SURE
THEY'RE HERE A.S.A.P
Quick Facts

American People
American Women
Harvard University
Princeton University
American First Ladies
Childhood & Early Life
Michelle Obama was born on 17 January, 1964 in Chicago, Illinois. Her father Fraser Robinson III was a pump operator for the Chicago Water Department. Her mother Marian was a stay-at-home mother who considered it her priority to raise Michelle and her brother Craig.
She received a conventional upbringing and her childhood was a happy one. She was a bright student from an early age and joined a gifted class at Bryn Mawr Elementary School by the time she was in sixth grade.
She attended the Whitney Young High School where she took advanced placement classes and was a member of the National Honor Society. She graduated in 1981 as the salutatorian of her class.
Then she went to the Princeton University where she majored in sociology and African-American studies. She graduated cum laude with a Bachelor of Arts in 1985.
Following her graduation she went to the Harvard Law School from where she earned her Juris Doctor (JD) in 1988. There she worked for the Harvard Legal Aid Bureau, assisting low-income tenants with housing cases. 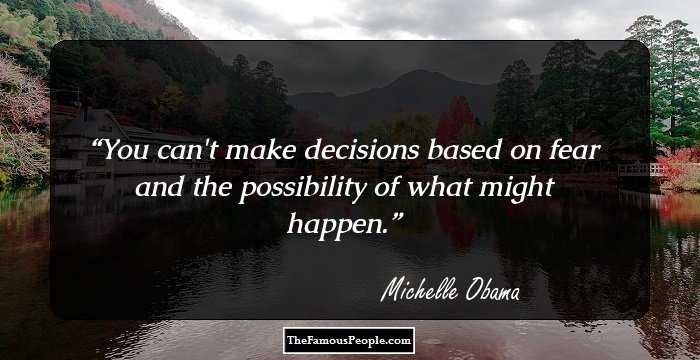 Quotes: You, Fear
Continue Reading Below
Later Life
Michelle Obama was appointed as an associate at the Chicago office of the law firm Sidley Austin where she worked on marketing and intellectual property.
She then embarked on a career in public service and became an Assistant to the Mayor in 1991 and then served as the assistant commissioner of planning and development for the City of Chicago.
In 1993, she became the Executive Director for the Chicago Office of Public Allies, a non-profit organization. She worked there for nearly four years, guiding and encouraging young people to work on social issues in nonprofit groups and government agencies.
Michelle Obama served as the Associate Dean of Student Services at the University of Chicago in 1996.
In 2002, she became the executive director for community affairs at the University of Chicago Hospitals and a few years later was appointed the Vice President for Community and External Affairs in 2005.
Married to presidential aspirant Barack Obama by this time, she cut back on her own job and ultimately quit her lucrative high paying position in order to work on her husband’s presidential campaign.
Barack Obama declared his presidential candidacy in 2007 and Michelle reduced her professional responsibilities greatly to support her husband’s career. Initially she did not get much involved in the campaign as she had two young daughters to care for.
However by February 2008 her participation in her husband’s career increased considerably. By now she even started writing her own speeches for Barack’s campaigns.
Barack Obama became the President of the United States in January 2009 and Michelle Obama, the First Lady. During her initial months as First Lady, she volunteered at homeless shelters and soup kitchens.
She advocated on behalf of military families, encouraged national service, and supported initiatives that help working women balance career and family. She also advocated for her husband's policy priorities and supported the economic stimulus bill.
She launched the ‘Let’s Move!’ initiative in 2010. The initiative strives to solve the epidemic of childhood obesity by providing healthier food in the schools and encouraging kids to be more physically active. The focus is also on motivating parents to make healthier choices for their kids.
She collaborated with Dr. Jill Biden in 2011 to launch the initiative, ‘Joining Forces’ which calls all Americans to support service members, veterans and their families. ‘Joining Forces’ works closely with the public and private sector to ensure that veterans and their families receive the requisite support.
In 2014 she launched the ‘Reach Higher’ initiative which aims at inspiring young people in America to continue their education past high school. The program encourages students to complete a professional training course or a college or university degree by making them understand the significance of higher education. 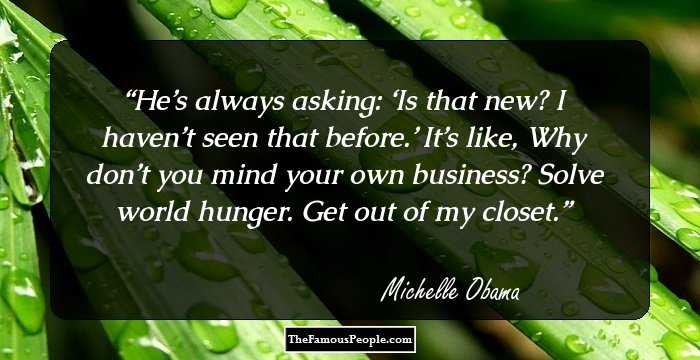 Quotes: You, Like, Business, I
Personal Life & Legacy
Michelle first met Barack Obama in 1989. He was a summer intern at the law firm she worked for, and she was assigned as an adviser to him. They eventually fell in love and married in October 1992. The couple has two daughters: Malia Ann and Natasha. She is a very committed mother and considers her family her first priority.
She is also very well-known for her sense of fashion. She is considered to be an American fashion icon and trendsetter. Michelle Obama appeared on the cover and in a photo spread in the March 2009 issue of ‘Vogue’.

Quotes By Michelle Obama | Quote Of The Day | Top 100 Quotes

See the events in life of Michelle Obama in Chronological Order